Labor Day turns up the heat 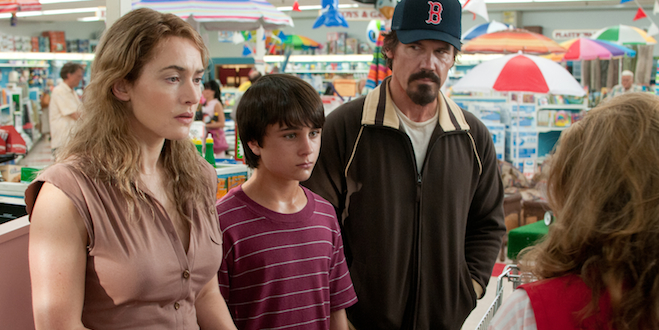 Montreal-born writer-director Jason Reitman, 37, is famous for acerbic comedies with bone-dry wit and a satirical edge—Thank You For Smoking, Juno, Up in the Air, Young Adult. But with his fifth feature, Reitman shifts gears.  Based on the 2009 novel by Joyce Maynard, Labor Day is an unabashed romance wrapped in an abduction drama. Set in 1987 New England, on a sweltering holiday weekend, it’s about a depressed single mother named Adele (Kate Winslett) and her son Henry (Gattlin Griffin) who offer a ride to to Frank, a wounded fugitive, only to become his captives in their suburban home. Played by a ferociously charismatic Josh Brolin, Frank turns out to be the perfect lover, handyman and father-figure, plus he bakes a mean peach pie. This sensitive hunk of burning love is a catch with with a catch: he has a double murder in his past.

I talked to Reitman last fall after Labor Day’s premiere at the Toronto International Film Festival. 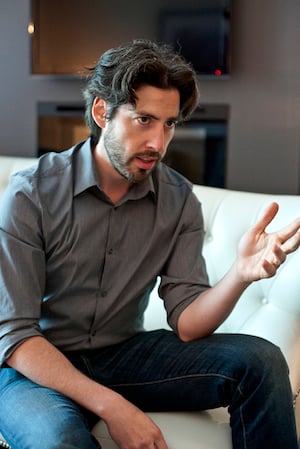 Q: This movie is quite a departure for you. It’s a period piece. It’s a romance with . . .

A: Almost no dialogue.

Q: It’s certainly more visceral, and unlike your other films, it’s not dry and sardonic. It’s . . . moist and romantic.

A: Ha! Can we put that on the poster? Maclean’s says: “Moist and romantic!”

Q: Well, it is overheated. Everybody is really hot all the time. There’s a lot of sweat.

A: Yeah, I’m used to making movies about characters who don’t sweat.

Q: What led you to that? Did you set out to make a different kind of movie?

Q: You could have made it seem more plausible.

A: And that would have made the movie boring for me. My first movie is about the head lobbyist for Big Tobacco. My second one is about a pregnant teenage girl who has a blasé look at her pregnancy. The third one’s about a guy who fires people for a living and whose life philosophy is that life should be lived alone. I prefer characters who do things that are never thought to be heroic and are never the things that you would expect from your lead. That’s why I chose them.

Q: You skipped over your most recent film, Young Adult.

A: Oh sorry. How do I boil that down? Heroes in films don’t try to tear apart marriages. The style of [Labor Day] is completely different, and even though this movie is completely romantic, ends on such a happy note, at its core it has similar questions and it involves unusual heroes doing unusual things.

Q: I feel only a woman could have written this story.

A: It’s so funny that you say that. When they went to publish the book, Joyce was at a moment in her career when it was hard to get a book published. And an agent read the book and said I will represent this book if I you follow all my instructions. And the first one is: I’m going to send it to publishers without your name on it. And when publishers read it they said this must be the work of a young man, a first-time writer. That was the belief across the board. There was a rumour that James Franco had written it. And they got it published.

Q: It’s just that the guy seems like a woman’s ultimate fantasy figure, a great lover who fixes everything and bakes the perfect pie. He raises the bar considerably, despite the fact he’s murdered someone.

A: That’s the thing. I’m not sure that part of the perfect female fantasy is a double murderer. I think what each of them stands for is a beautiful person with a complicated past, broken for reasons that they can’t control.

Q: Did Joyce Maynard have a hand in the film? Did you reach out to her?

A: I reach out to all the authors I’ve worked with. I send them the screenplay, they send me notes, I use some, I don’t use some. They come to set. Each author I’ve worked with is in the movie at some point.

Q: What’s the biggest departure from the book?

A: There are very few. On the other books I’ve adapted I use a lot of stuff, I also completely rewrite things. This is the first time where I wanted the audience to have the book experience, from start to finish. If there’s a departure it’s that Frank’s backstory is told through flashbacks; in the book it’s a chapter.

Q: In Brolin you’ve got such a strong physical presence. When you read a book you don’t see that.

A: In the book, I think she described the way Frank looked as a diagram in the dictionary under the word “man.” And I think that’s what Josh Brolin looks like. He has no desire to be a leading man. This is a guy who is a character actor and who would be so much happier in prosthetics. To get him to just  be his normal, handsome self is probably the most challenging aspect of directing Josh. He’s a brilliant actor and his presence is commanding, but I don’t think I’ve ever met someone so dismissive of their attractiveness. He won the DNA lotto. I just wanted him to cash the ticket. He’s spent his career hiding all that.

A: It’s a romance. Romance now is a kind of a bad word. When we think of romance we simply think of Nicholas Sparks. This is a more old-fashioned, complicated romance that deals with the complexities of desire. The rest of my movies are very modern-looking, particularly Young Adult. This is a look backwards. I’ve been working with the same people for a long time—my cinematographer I’ve known since I was 15, my editor since I was 17—and we all had to learn a new language together.

Q: Were you thinking of a particular precedent when you made Labor Day?

A: It’s a weird mix. The films we watched were Stand by Me, Running on Empty, Tree of Life, Night of the Hunter, and a there’s a black-and-white Bogart film where he keeps a family captive [Desperate Hours].

Q: When I interviewed your father recently, we talked about the fact that Hollywood no longer wants to make movies like this. That it’s only interested in action franchises big tent-pole productions. But this year there seems to be a lot of them around. Movies that elicit grown-up emotions.

A: You raise a great question that I really wish I had an answer for because it determines my future. I can only hope that adults need movies too. And there’s something about the theatrical experience of being in a group full of people. Look, this is a movie that makes a lot of people cry, and there’s something a lot different about watching Labor Day in a theatre with hundreds of people crying together, experiencing something moving and romantic together, rather than sitting at home alone watching it. Adults want these films and there are filmmakers who want to make them. They will find the financing by any means possible.

Q: Films cast a spell in a theatre differently than on TV, especially when it comes to suspense. We’ve seen so many films this year about characters who are trapped.