Kevin Bacon, step down, Footloose 2.0 is an upgrade

The dancing is better, the drama grittier, the stars sexier—plus the music and cast are more diverse 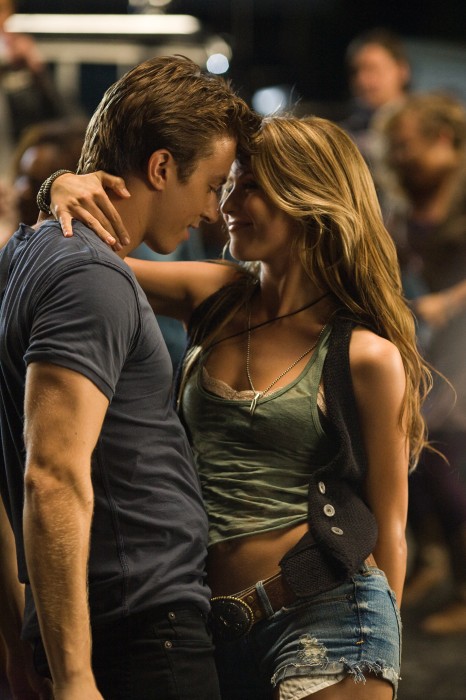 It’s a rare remake that improves on the original. But the new Footloose does just that. The dancing is better, the drama grittier, the stars sexier—and the music and the cast are more energetic and diverse. Kenny Wormald, the new lead, generates a lot more charisma and heat than Kevin Bacon, and Julianne Hough is smoking hot as his partner. I’m not relying on memory here. I re-watched Herbert Ross‘s 1984 original after seeing the new Footloose, which is directed by Craig Brewer (Hustle & Flow, Black Snake Moan).  On many levels, the remake is a scene-by-scene replica in contemporary setting, complete with the yellow VW Beetle. But here are 10 significant differences:

1. Taking it from the top. Announcing a more intricate choreography, there are more feet in the close-up of the dance sequence during the opening titles. And it segues into a violent scene that’s just back-story in the original—the car crash that kills a gang of sexually charged, drunken kids, including the preacher’s son. It’s the event that prompts the small town to prohibit public dancing.

2. The hero. As Ren McCormack, the city kid out to heal the fearful town, and win the preacher’s daughter, Bacon came across as a hard-boiled elfin punk. His rebel-without-a cause had a sulfurous tinge of malice. Bacon later found his niche playing villains, but in Footloose he was still vying to be a romantic lead. Yet even as a hot-blooded teenager, he had a gekko-like coldness. In Footloose, he seemed incapable of conveying the impression that he cares about anyone or anything other than himself. He’s just a knot of teen ennui. Bacon’s character came from Chicago. The new kid is from Boston, and so is the actor who plays him, Kenny Wormald, who was born in 1984, the year the original came out. Wormald is less creepy than Bacon. Positively wholesome. His version of the character is more generous  than any of the adults, without being sucky. Though he plays anger to the hilt, his charisma is fired by an emotional warmth. And he’s a far better dancer. He tap-danced for President Clinton at 10. And he’s danced in music videos for Madonna, Justin Timberlake and Prince. 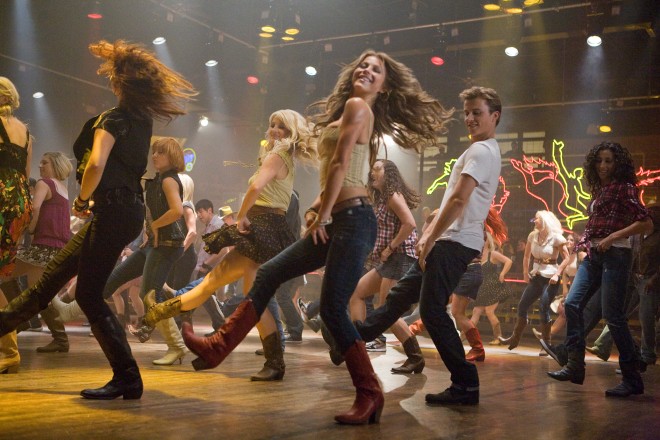 3. The heroine As Ariel, the preacher’s daughter, Julianne Hough is not too shabby either. She’s a country music singer and dancer who first set the floor on fire as as the two-time professional dance champion on Dancing With the Stars. Plus she can act. And she creates some serious chemistry with Wormald.

4. The dancing is hotter And it’s blacker. Infused with acrobatic break dancing, it’s also more virtuosic, which makes this more of a musical and less of a naturalistic drama. The styles run the gamut from western line-dancing to hip hop. In the original you could buy that these were just kids who liked to dance and got pretty good at it. In the sequel, we’re watching pros who could hold their own with Cirque du Soleil.

5. The remake is blacker The cast of the original was all-white. The town in the remake seems to have gravitated from the mountain-rimmed West to the Deep South. And its high school has a robust contingent of African Americans, who all happen to be Broadway-calibre hip hop dancers. In the remake, the socio-political stakes have been raised. The teen hero is not just saving the town from prudish church-made paranoia. He’s a northern liberator fighting the Civil War all over again, the Boston whiz kid superkid out to unleash the black-dancing freedom of the South. Also, the warehouse boss who provides the venue for the triumphant prom that ends the movie is African American. He runs a cotton mill.

6. The action is wilder And bigger. The original had the hero and the redneck villain face off in tractors, driving at each other in a game of chicken that’s like rural homage to Rebel Without a Cause. The remake offers a full-scale demolition derby with old school-buses. And the redneck villain in the remake has a vocation—as a race car driver.

7. The slut factor Ariel follows a parabolic arc from devil to angel. But in the remake, her bad girl phase is more delinquent, her dancing is dirtier. When she tells her dad in the church that she’s not a virgin, it seems even more scandalous. Her ‘conversion’ from vixen to saintly heroine seems even more improbable, but who cares. With the blue-eyed, big-haired Julianne Hough the filmmakers have found an bolder, sexier facsimile of the original’s Lori Singer.

8. The preacher dad In the original, John Lithgow was a fire-and-brimstone evangelist, who eventually finds a heart beneath his starchy exterior. In the remake, Dennis Quaid acts morally conflicted, and latently sympathetic, from the outset.

9. The homely best friend. In the original, Christopher Penn played Willard, the local yokel who graduates from wallflower to dancing fool. Miles Teller, who was brilliant opposite Nicole Kidman in Rabbit Hole, clones the part to perfection, and outstrips Penn.

10.  Thankless roles  Playing Mom was a thankless role in the original and that hasn’t changed. As the preacher’s wife, Andie McDowell gets stuck with the role in the remake, and gets even less mileage out of it than Dianne Wiest did in the previous incarnation. Don’t count on this role to resurrect McDowell’s career from the doldrums. The last thing you want be in Footloose is a mom. Or the heroine’s hectoring best friend. That would be Rusty—played by Sarah Jessica Parker in the original, who showed more spark than the new girl, Puerto Rican actress Ziah Colon.