In a tale of financial contagion that plays like a sci-fi disaster movie, Jeremy Irons devours his role as corporate vampire with droll relish—it's a marvel of bespoke casting 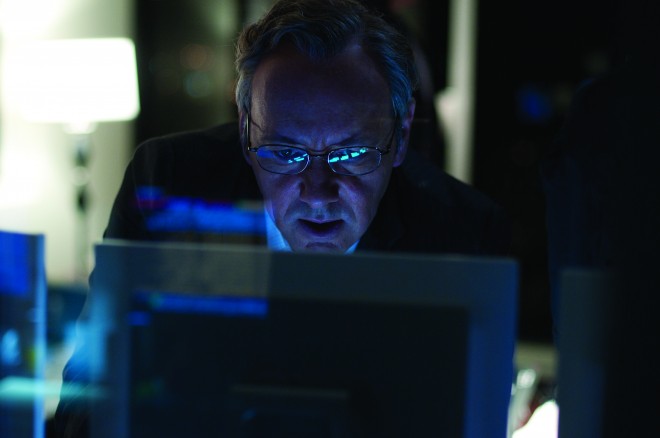 Kevin Spacey has built much of his career on playing Machiavellian monsters. Glengarry Glen Ross, Swimming With Sharks, The Usual Suspects,  Casino Jack, Horrible Bosses . . . his resume is a veritable rogues gallery. So in Margin Call, it’s refreshing to see Spacey play against type as a high-powered Wall Street honco who is not an asshole. As Sam Rogers, the captain of brokerage firm that hits a Titanic iceberg in the 2008 recession, he’s an old-school businessman with a conscience, who’s forced to engineer a fire sale for his sinking firm.

Margin Call is a chilly, potent chamber piece that unfolds like a sci-fi disaster movie. It begins with a brutal downsizing at the firm that throws a 19-year veteran (Stanley Tucci) onto the street. As he’s frog-marched out of the building by security, he slips a pocket computer drive to a bright entry-level analyst (Star Trek‘s Zachary Quinto), telling him there’s some unfinished business on it that might scare him. The whiz kid works late, finding the missing piece of the puzzle, and what he sees is catastrophic—the financial equivalent of discovering an alien life form that’s about to destroy the universe as we know it. It’s the middle of the night. One by one, his superiors come in to gaze in disbelief at the mysterious and catastrophic projections on the computer screen. And up the corporate ladder we go—past Spacey’s troubled character, past the firm’s cynical head trader (Paul Bettany), past its Chief Risk Officer (a brittle Demi Moore), past its ruthless chief executive (Simon Baker)—until finally we meet the Wizard of Oz, the wily CEO played by Jeremy Irons.

As we scale the corporate stratosphere,  each executive gazes at the data and is thunderstruck by the Thing that’s going to make all hell break loose, without us really understanding what the Thing is. Finally Irons’ character, serving as the viewer’s surrogate, asks for an explanation: “Just speak to me in plain English,” he says. “Speak to me as you would a young child. Or a golden retriever.” Irons devours his role as the blithe corporate vampire with droll relish—it’s a marvel of bespoke casting.

Margin Call unfolds as a claustrophobic thriller, set almost entirely within the walls of a Manhattan office tower after hours. It’s not unlike a submarine movie, where time stops after the vessel has hit bottom and the crew is sweats bullets as they try to figure out how to they’re going to get out alive. A first feature sharply written and directed by J.C. Chandor, the movie a  strikes an agile balance between gritty realism and stylish drama. It has the literate, self-contained elegance of a stage play, with the visual panache propulsive energy of a genre film.

Recently we’ve seen a couple of studio pictures, In Time and Tower Heist, that broadly vilify the One Per Cent, and would serve as wrothy crowd-pleasers projected on a canvas sheet in an Occupy Wall Street park. Margin Call is the smart one that may get called to the margins of the Oscar race.