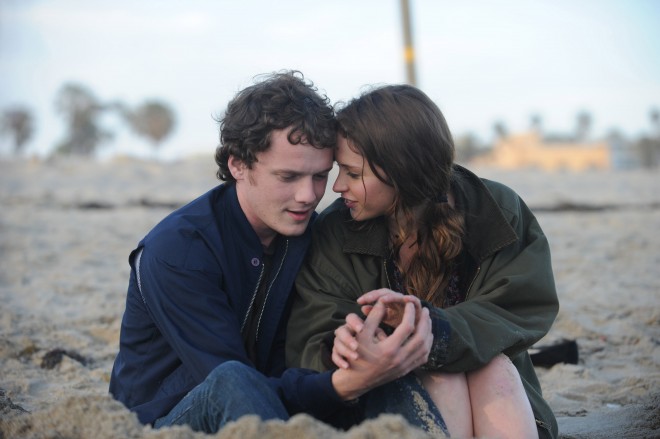 It’s  rare that you see a romance without the obligatory comedy. Unless it’s a flat-out tearjerker. Even edgy indie filmmakers don’t usually let the rom-com ratio drop much lower than 60/40. And the lack of cute comedy is just one of the things that’s so  refreshing about Like Crazy. It’s not a rom-com. It’s a romantic drama that unfolds uncannily like life itself, without the forced punctuation of ironic beats and witty aperçus that even the most authentic indie filmmakers feel obliged to sew into the lining of their scripts. That’s partly because Like Crazy—which won the Grand Jury Prize at Sundance—had no scripted dialogue. The actors improvised. And the result is a pure, unaffected romance, a tale of two lovers who struggle to remain true to each other after they are separated by cruel circumstance.

U.S. actor Anton Yelchin (Star Wars) and Britain’s Felicity Jones (The Tempest, Page 8)  star as Jacob and Anna, who meet as college students in California and become long-distance lovers, living continents apart after Anna violates the term of her U.S. student visa. Homeland security thwarts romantic security. She’s a writer; he designs furniture. Temporarily separated, they pursue their careers in L.A. and London, while trying to remain faithful. What goes on between Yelchin and Jones is so tender, intimate and real that it’s hard to believe we get to watch. And no, I’m not talking about sex—there’s nothing explicit on display—just emotion.

“Every scene in Like Crazy was treated like a sex scene,” says U.S. director Drake Doremus (Douchebag), “even though there are no typical sex scenes. But the feeling was always that we’d closed the door and everything inside was safe and intimate, yet also wide open.”  The director adds that he was trying to make a film in the style of the French New Wave, and drew inspiration from  Alfonso Cuaron’s  Y Tu Mama Tambien and Lars Von Trier’s  Breaking The Waves.  With its thin narrative, Like Crazy doesn’t measure up to those films, but you can see the influence. The actors’ improv performances don’t feel like performances. Yet this is not the wise-assed improv of actors trying to be smart or funny. Yelchin and Jones engage in a sincere, seamless give-and-take that makes you sit up and think (a) that’s exactly how people behave in a relationship and (b) it’s hard to remember seeing an American film with so little business cluttering up the dialogue. 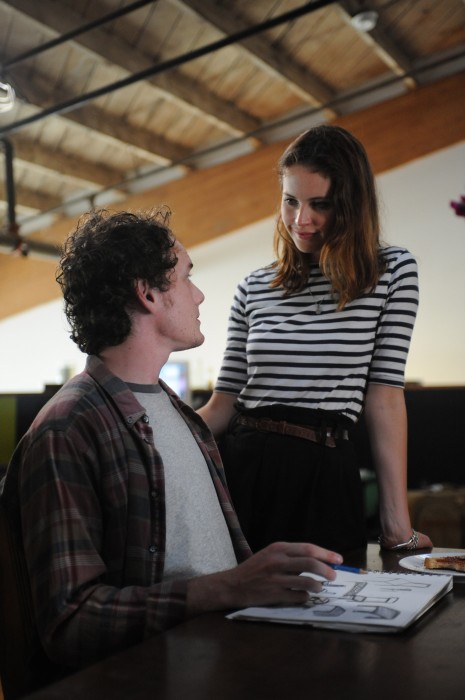 Aside from foreign language films, the comparisons that come to mind are English. There’s a certain similarity to Mike Leigh, especially in the scenes with Anna’s chatty upper-middle class parents, but while Leigh’s dialogue is improvised, his intricate dramas tend to be more torqued that this one. Like Crazy has more in common with the loose, airy tone of Michael Winterbottom’s work, notably Wonderland.

But enough with scrambling for analogies. What’s remarkable about Like Crazy is that it doesn’t remind us of anything else, and we don’t feel for a second that the director, unlike so many of his American indie peers, is diabolically referencing other movies. The film’s magic lies in the body language of the two leads, whether they’re rolling around in bed or circling each other in the kitchen. As Doremus suggests, even when they’re not having sex their physical chemistry is in play. Which brings me to another  first: I can’t remember when I’ve seen a movie with so many lyrical scenes that take place in bed without devolving into sex. Yet their tension is tangible—physical—first in its erotic comfort, then in the strain of heartache. We can feel its tidal force pulling them together and apart.

Doremus shoots in a vérité style, but it’s calm, not jittery. The direction doesn’t call attention to itself, aside from some deft jump cuts and smash cuts. But they seem less like a New Wave affectation than a judicious device for leaving out chunks of narrative, suggesting that, as close as we may feel to this couple, we can’t possibly see their whole story. I’m loathe to dip into the plot except to say that both Anna and Jacob each develop relationships in their home countries during their separation. He hooks up with an assistant in his L.A. design studio played by Jennifer Lawrence (Winter’s Bone); she befriends a neighbour in her London flat played by  Charlie Bewley. Aside from that, let’s just say there’s no predicting how this relationship will end. But I can guarantee it’s neither cute nor tidy.