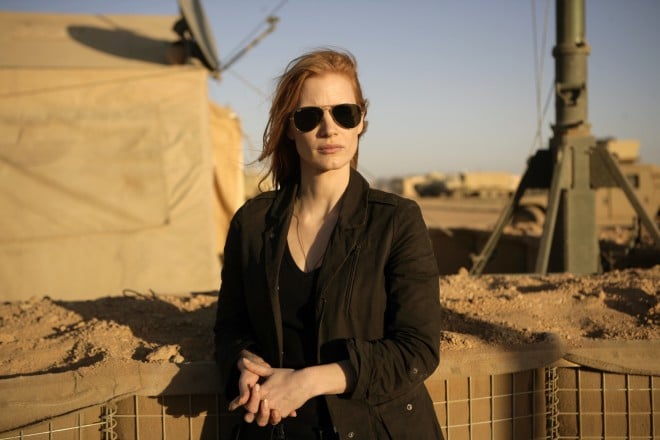 Opening this weekend in Canada are two of the year’s strongest films, Amour and Zero Dark Thirty, which received five Oscar nominations apiece yesterday, and will be competing for Best Picture, Actress and Original Screenplay. In both cases, their treatment by the Academy came as a surprise. For Amour, it was a blessing. It’s hard to find a critic who questions that it’s one of the year’s finest movies, but even the best foreign films rarely escape the ghetto of the foreign-language category. Amour is the first foreign film to win a Best Picture spot since Crouching Tiger Hidden Dragon (2000) and one of just three foreign films in history to score both Best Picture and Director nominations. By contrast, Zero Dark Thirty’s Oscar tally was a disappointment, as Katherine Bigelow was conspicuously snubbed for Best Director. No one could argue with the brilliance of how she directed that film. So you can only conclude that she’s the victim of the backlash generated by Washington’s condemnations of the film’s veracity, and its torture scenes. 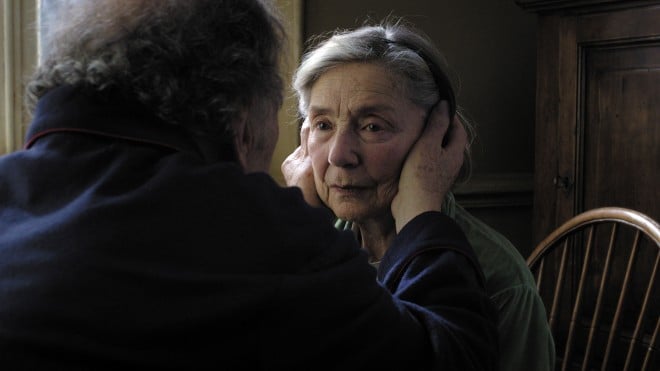 Film critics are required to set their opinions in stone often moments after seeing a movie, but our views inevitably ripen and mutate over time. I saw Michael Haneke’s Amour in Cannes, where it won the Palme D’Or. I found it austere, harrowing, delicate, melancholy, moving—and unsettling enough that watching it was an experience I was in no hurry to repeat. But its spell has not yet lifted, only deepened. Set entirely in a grand Paris apartment, Amour is a palliative love story about an octogenarian couple facing mortality. Jean-Louis Trintignant and Emmanuelle Riva give exquisite performances as retired music teachers Georges and Anne, a sophisticated married couple who are reduced to caregiver and patient after she suffers a stroke. Amour unfolds as a note-perfect chamber piece. When their daughter Eva (Isabelle Huppert) shows up and tries to persuade her father to put her mother into care, it’s like an invasion, and we feel almost as violated as he does. Amour is grounded in touches of real experience that can’t be invented—it’s based on Haneke’s experience with his own parents. And for all its modest grace, this is a ground-breaking drama about a fundamental and inescapable rite of passage that the movies have barely grazed. Forget sex. In Hollywood, old age is the final taboo. And Amour is the ultimate Last Tango in Paris. 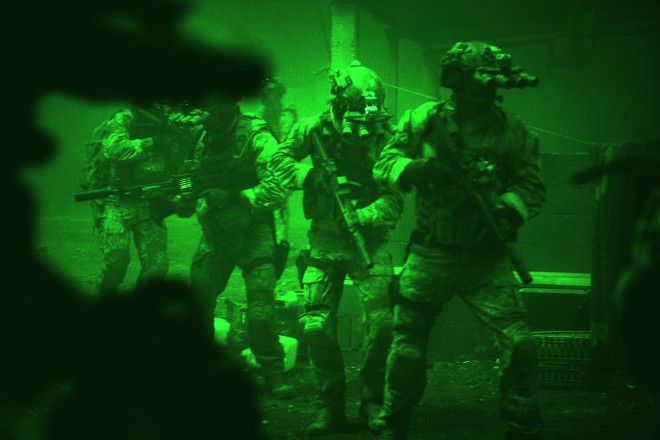 I saw Zero Dark Thirty a few weeks ago, the day before I committed my top 10 list to print. I threw it in the number one spot, more by default than anything else. I wasn’t sure if it was the best film I’d seen all year; the powder burns on my eyes were still fresh. But as a ripped-from-the-headlines thriller, it struck me as the year’s most electrifying drama, and beyond pertinent. Much of the film went by me in a blur. I found Mark Boal’s dense plotting of the procedural investigation even harder to follow than the Byzantine maze of congressional politics in Lincoln. But I didn’t care. I loved the atmospheric rush and got swept up up by the momentum leading to a climax that kept me on the edge of my seat even though I knew what would happen.

The water-boarding scenes, which dominate the film’s first act, were so disturbing—especially seen through the skittish gaze of Maya, the CIA agent played by Chastain—that Bigelow didn’t seem to be condoning torture, just presenting it with alarming realism. Chastain’s performance—as an anxious but resolute loner who is slowly hardened by years of pursuing an elusive target while the terrorist death toll mounts—is mesmerizing. And the final real-time portrayal of the assault on bin Laden’s compound is one of the most gripping take-down scenes ever shot.

That said, I came out of the cinema roiling with mixed emotions. The movie’s visceral pleasures struck me as morally, and politically, questionable. That’s partly why I placed Zero Dark Thirty at the top of my list. No film in the past year had provoked such a strong response; I hold a special place for movies that derail my critical perspective. As the days passed, the backlash against the film began to build. One of my more astute colleagues delivered a diatribe condemning it as the most vile C.I.A. propaganda imaginable. He was pretty convincing. The movie has since been condemned by U.S. Senators, Democrats and Republicans. But again the messages are mixed: Is Zero Dark Thirty inauthentic or too authentic? Is it exaggerating the role of torture or messing with the official message? Is it pro-Obama or anti-Obama? (He never appears in it.) It’s been fairly well established that the movie is incorrect in suggesting that torture played a vital role in finding the courier who led the C.I.A. to bin Laden. But torture certainly figured strongly in the early stages of a  complex investigation, and one could argue that its presence in the film is dramatically justified.

Now there’s a backlash against the backlash against Zero Dark Thirty. Filmmakers like Michael Moore, hardly a champion of torture or the C.I.A., are rushing to the film’s defense, and arguing that it’s a work of art that takes reasonable dramatic license, and that Bigelow has been unfairly targeted for making a disturbing movie. Of course Moore has never let the facts get in the way of a good story. But Zero Dark is drama, not documentary.

Unlike Moore, from what I know of Bigelow, she’s not motivated by politics. She’s a genre geek driven by the desire to make gut-wrenching, hair-raising drama, something she does incredibly well. She may be so close to the event she’s dramatizing, and to her sources, that she has transmitted a toxic payload of anti-jihad hysteria and jingoistic bombast without even trying. But that’s intrinsic to the mission she’s depicting. The result remains the most talked about movie of the year—and one you should see see for yourself, rather than take someone else’s word that it might be bad for you. Is it the year’s best movie? Maybe not. Now I’m leaning toward The Life of Pi, The Master—or Amour. Talk to me tomorrow.

(Footnote: in a year when most movies were driven by heroes, not heroines, you gotta love the fact that the Oscar competition for Best Actress is shaping to be the Academy’s tightest race, featuring a kick-ass heroine (Jessica Chastain);  a ferocious mother (The Impossible‘s Naomi Watts) Hollywood’s hottest young actress (Jennifer Lawrence of Silver Linings Playbook), and both the oldest and youngest nominees in Oscar history, Riva Emmanuelle and Quvenzhané Wallis (Beasts of the Southern Wild . . . Stay tuned.)