The Academy Awards are around the corner. See if your picks align with ours. 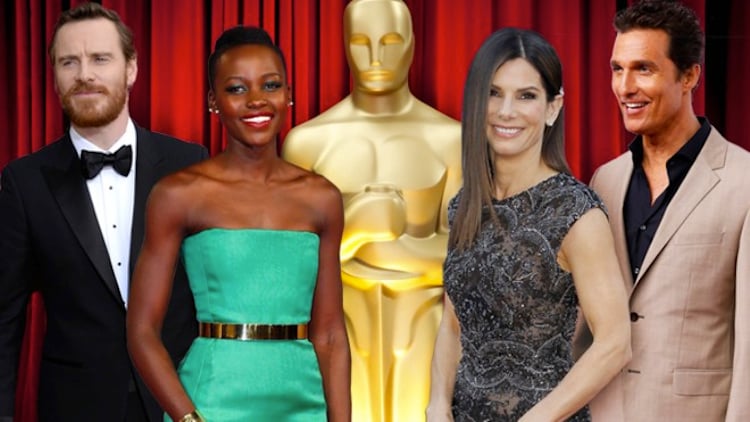 With the Academy Awards coming this Sunday, Maclean’s cabal of critics have assembled to provide you with their picks to win statuettes on film’s biggest night. Our resident film critic Brian D. Johnson will put out his own in-depth list in the coming days, but in the meantime, here are our takes on who will win (and who should win) eight of the most important award categories:

BARRY HERTZ is, by day (and sometimes night), Maclean’s manager of editorial production. By night (or early morning), he writes about culture both high and low. His favourite movie of 2013 was The Counselor. (Don’t laugh.)

JAIME WEINMAN has been accused of not taking the Oscars seriously and just predicting stuff based on his cynical beliefs about Academy voters. For shame! Nothing is more precious to Jaime than the collective opinions of a bunch of Hollywood insiders who belong to a private he-man club. Also, the best movie of the year never wins Best Picture unless it’s Casablanca.

ADRIAN LEE is certainly the person least qualified to be here, but he has placed in the top three in the last three years of his good friend’s very competitive Oscar pool, so there’s that. His least favourite movie of 2013, by a wide margin, was The Bling Ring. He would very much like his money back on that one.

Hertz:
Who Will Win: American Hustle is the feel-good con-man story of the year, a lesson in camp that is more a series of finely tuned music videos than a “film for our times.” It’s Goodfellas Lite, but with such a stellar cast and bouncy tone, it will surely sweep Academy voters off their feet. We’ll all be embarrassed in a couple of years by its victory.
Who Should Win: Inside Llewyn Davis. Oh, wait, that wasn’t nominated. Let’s give it to Gravity, then, a technical marvel that—in an era where VOD and sky-high ticket prices conspire to keep movie fans at home—redefined the cinema-going experience.

Weinman:
Who Will Win: American Hustle. The Wolf of Wall Street has become slightly controversial due to its moral ambiguity, and if there are two things Oscar voters are scared of, it’s controversy and ambiguity. American Hustle is more in the vein of previous Oscar winners like The Artist: a movie that few consider great but that has the signposts of a quality film.
Who Should Win: Gravity. It’s time for a big-budget special-effects crowd-pleaser to get a shot at the Oscar brass ring; not that smaller pictures should never win, but I think Hollywood should occasionally honour what it does best.

Lee:
Who Will Win: 12 Years A Slave. Never mind the noble announcement that U.S. schools will start teaching this unflinching film as part of the curriculum, this hits all the notes that historically make Academy voters salivate: excellent cinematography, a vital social aspect, slow (“meticulous”?) pacing, critical acclaim, a director with artistic credibility, and the kind of elite individual performances that provide valuable momentum. This was no one’s favourite film–how could an uncompromising portrait of slavery be anyone’s favourite?–but it is elegiac and important, things that matter to the Oscars.
Who Should Win: Gravity. Watching this in 3D was somehow both expansive and claustrophobic, combining all the magnetism of a elegantly delivered Shakespearean monologue with a cinema-qua-cinema experience that you simply could not have watching it on Netflix. Narratively, it was profoundly thin, but its greatest trick is the way it doesn’t let you consider just how flimsy it is until long after you start breathing again. Remember Avatar, and the Academy’s craven love for it in 2010? This is what Avatar–which just lost the crown to the critically acclaimed, under-watched Hurt Locker–dreamed of being.

Hertz:
Who Will Win: Amy Adams, because the Woody Allen scandal was expertly timed to kneecap Cate Blanchett’s chances.
Who Should Win: Amy Adams, not necessarily because she deserves it for American Hustle, but rather for a body of work that’s been consistently stunning (in particular, her performance in 2012’s The Master, which was unjustly ignored by the Academy).

Lee:
Who Will Win: Here’s a fun fact about me: I’ve seen every Woody Allen film (and make a point of rewatching five of them once a year), and so that’s where I’m coming from when I say that it’s encouraging that his craft has been back in the eyes of the Academy, largely missing between 1994’s Best Director nom for Bullets Over Broadway and 2011’s Best Picture-nominated Midnight in Paris. But there’s no denying that Allen got the most out of Cate Blanchett as a brilliant, ennervating Madoff-era Blanche Dubois in Blue Jasmine/the modernized Streetcar Named Desire.
Who Should Win: Cate Blanchett, on the strength of her acting, was an Oscar shoo-in two months ago. Nothing about that specific sentence has changed in the last two months. Workaholic Amy Adams is a great story I’m rooting for, but she was only good in American Hustle.

Weinman:
Who Will Win: Matthew McConaughey for Dallas Buyers Club. Oscar voters are mostly middle-aged white people who watch HBO a lot. They’ve been watching True Detective and are impressed with McConaughey’s acting; now that they know he’s a good actor, they’ll vote for his movie performance just on the basis of True Detective. The power of TV.
Who Should Win: Bruce Dern for Nebraska. You always want to have at least one old and ornery winner.

Lee:
Who Will Win: That’s what I like about these McConaughey roles; I get older, they stay the same age. Oh, wait a second: that’s no longer true. He’s gone from a set of abs with an actor attached to them to a legitimate and well-regarded A-list talent, and between Wolf of Wall Street and his stunning turn in Dallas Buyers Club, it’s hard to name another actor who has made a bigger leap in a single year in recent memory.
Who Should Win: Sweep it.

Hertz:
Who Will Win: Jennifer Lawrence, because Oscar voters just love that American Hustle. Oh, and funny accent. Oh, and a pretty, always-gracious performer.
Who Should Win: Lupita Nyong’o, because few actresses can ever hope to capture such burning pain and intensity as the young Nyong’o.

Weinman:
Who Will Win: Julia Roberts for August: Osage County. Voters love giving prizes to lead actors who are slumming it by taking a supporting part. Full-time supporting actors rarely love this quite as much.
Who Should Win: Lupita Nyong’o for 12 Years a Slave. One of the most harrowing roles in a harrowing movie.

Lee:
Who Will Win: Lupita Nyong’o, because her performance will haunt you in the days after you watch 12 Years A Slave, and in a way that somehow outshines others in a film bursting with brilliant performances.
Who Should Win: Nyong’o, because frontrunners aren’t always wrong choices. But I wouldn’t be surprised if 84-year-old June Squibb takes it for her brassy matriarch in Nebraska, in what will be described as a surprise, but would be a coronation of a career as a top-notch female character actor, a job that rarely earns plaudits.

Hertz:
Who Will Win: Jared Leto, because Oscar voters love the whole weight-loss, play-dress-up game (see the Best Actor category for more).
Who Should Win: Jonah Hill, because he is this generation’s Joe Pesci. And because The Wolf of Wall Street wouldn’t be half as riotous without him.

Weinman:
Who will win: Michael Fassbender for 12 Years a Slave. The Academy will want to show its sensitivity to the historical issue of race, and what better way than by honouring the guy who played the slaveowner?
Who should win: Michael Fassbender for 12 Years a Slave. More supporting actors need to be recognized for playing bad guys. That’s what being a supporting player is all about.

Lee:
Who Will Win: Jared Leto. We wouldn’t be talking nearly as much about McConaughey if it wasn’t for his foil, and the scenes with both of them in it are hard to take your eyes off of.
Who Should Win: Leto has won every major award for his supporting role in Dallas Buyers Club except the vaunted BAFTA–and that went to Barkhad Abdi, the complicated young pirate leader in Captain Phillips. It feels like a 65-35 split between them for Academy voters, and the Mogadishu-born Abdi’s personal narrative of being a former chauffeur before getting nominated for his first-ever acting role may be enough to narrow those odds to 50-50 toss-up.

Hertz:
Who Will Win: Steve McQueen, because Oscar voters can’t possibly bestow American Hustle with every single award. Or can they…?
Who Should Win: Alfonso Cuaron, because there has never been a movie like Gravity before, and there likely won’t be for a decade to come.

Weinman:
Who Will Win: David O. Russell for American Hustle. Because no one is going to be able to resist the lure of an announcement where the director’s name rhymes with the movie he directed.
Who Should Win: Alfonso Cuaron for Gravity. Despite Scorsese’s adept handling of lots of naked people, Cuaron’s handling of lots of space effects seems to be more in the Hollywood mainstream… onscreen, I mean, not offscreen.

Lee:
Who Will Win: Alfonso Cuaron. Not only did he coax a magnetic performance from Sandra Bullock–the engine upon which the whole thing operates–but then he also oversaw and imagined the engrossing effects, literally breath-taking space-scape and the reaffirmation of everything the movies do best. The totality of it, and the execution of his ambition: I mean, wow.
Who Should Win: Alfonso Cuaron. If he doesn’t, I will eat my shoe.

Weinman:
Who Will Win: Emmanuel Lubezki for Gravity, because voters are very impressed at the achievement of shooting locations that don’t actually exist.
Who Should Win: Roger Deakins for Prisoners. Because it’s Roger Deakins, and he’s never won despite 11 nominations. This is getting ridiculous.

Lee:
Who Will Win: Emmanuel Lubezki is a decorated vet and Oscar-anointed genius; he was the cinematographer for Alfonso Cuaron’s Y Tu Mama Tambien and dark Children of Men, on Terrence Malick’s The New World and the gorgeous The Tree of Life, and even the Coen Brothers’ overcaffeinated pet project Burn After Reading, and has arguably trumped his past works with Gravity. And if that film wasn’t enough proof of this man’s remarkable for eye for beauty and technical detail, look no further than his arresting Instagram feed.
Who Should Win: Gravity. But in another year? The core of any filmic love letter to a region is its cinematography, and to that end, the adoring, black-and-white portraits of middle America expanse that is Nebraska would be the leading contender to take it.

Lee:
Who Will Win: American Hustle, because there’s an order to these things, and David O. Russell hasn’t won an individual Oscar, and American Hustle‘s ten nominations needs to be recognized somehow, right? It is precisely the kind of move that feels inevitable, and feels wholly diminishing of the affair.
Who Should Win: When do we stop talking about Her as “hipster?” Oh, you mean Spike Jonze has managed to write something that elicited profound emotions out of an age group and demographic that others cannot? Well, we better parcel it away and dismiss it as niche and other! Frustrating, especially for a movie that is equal parts innovative and rich with resonant feeling, a screenplay that’s all the more exciting because it’s Jonze’s first, somehow.