Madea gets a makeover

Beloved and loathed, hope and scourge of black critics, Tyler Perry tries his hand at subtlety 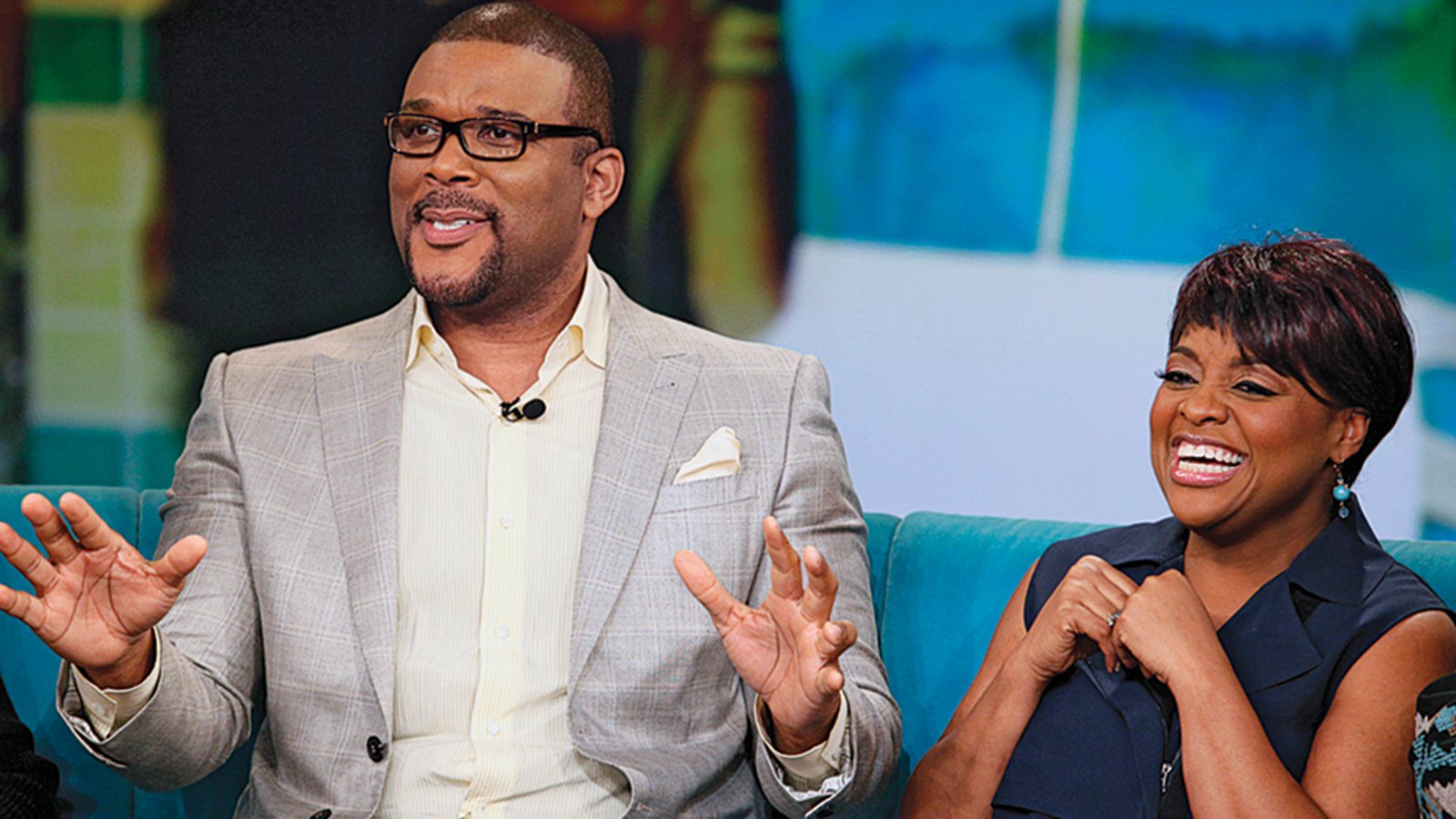 Every once in a while, the gods of popular culture smite the snobs and haters of the world in truly spectacular form. In 2009, Billboard magazine named Nickelback the “band of the decade”—a crude wake-up call for rock ’n’ roll fans too wrapped up in their own pretensions to realize that Nickelback was—and is—exceedingly popular. The Canadian group remains one of the highest-grossing tour acts on the planet. Still, says lead singer Chad Kroeger, “We’ve never really been a critic’s darling.” Neither has African-American filmmaker and actor Tyler Perry, the populist outcast of the south; a man who draws a mighty crowd but rarely any applause from critics. His stage plays, films and TV shows, rife with folksy Old Testament undertones and Eddie Murphy-inspired drag, are beloved by much of the southern African-American churchgoing population, but mostly panned or ignored by mainstream media. When a photo surfaced of Perry shaking actress Lupita Nyong’o’s hand at the Oscars, Twitter went into a near panic.

Like Kroeger, though, Perry is usually too busy cleaning up to give his critics much thought. In 2011, Forbes magazine named him the highest-earning man in entertainment, followed by producer Jerry Bruckheimer and director Steven Spielberg. His net worth is an estimated $400 million. Oprah Winfrey is one of his closest friends and business allies; his sitcoms air on her network, OWN. (In 2012, Perry even beat Oprah at her own extravagant game: He surprised her and best friend, Gayle King, with matching Bentleys).

The 44-year-old New Orleans native is best known for his serial performances as Mabel “Madea” Simmons, a hulking, crass, officious and, to many, hilarious grandmother who carries a pistol in her purse and regularly sweet-talks her way out of a prison sentence—though she does wind up behind bars in Madea Goes to Jail (2009), after forklifting a stranger’s Pontiac Solstice with disastrous results. Legal foibles and violent outbursts aside, however, Madea is the moral backbone of the Perry franchise: She beats the bad out of loose women and abusive men, and beats the good into wayward, unruly youth. In Diary of a Mad Black Woman, the film that launched Perry’s empire, when Madea’s newly destitute granddaughter Helen is abandoned by her rich, abusive husband, Madea holds up his mansion and takes a chainsaw to his expensive sofa. Meanwhile, Helen takes comfort in the arms of a wholly virtuous U-Haul truck driver. (In most of Perry’s films, as in the Bible, working-class grit is rewarded. Upward mobility is not.)

These are the fun, campy elements that give Tyler Perry films their trademark feel, but they are also the elements that critics—black critics, especially—find distasteful. Director Spike Lee has called Perry’s work “troubling.” Tricia Rose, a professor of Africana studies at Brown University, thinks Perry “is in peril of going down in history as a minstrel media mogul.” As his buffoonish characterizations of black Americans reach a progressively wider audience, Rose argues, they become “cartoonish and grotesque.” In other words, laughing at your grandmother’s Ebonics if you’re black, or her frugality if you’re a Jew, may be funny among members of your creed—but when that humour leaves the living room and enters the cultural commons, it’s no longer cute. It’s just racist. Perry’s response to this type of criticism is generally dismissive. He claims his detractors have lost touch with working-class black America; in 2011, he told Spike Lee to “go to hell.” Lately, though, he appears to have taken a very different approach.

Last year, feminist writer Brittney Cooper wrote a scathing critique of Perry’s work for the Crunk Feminist Collective online. She took issue with his obvious sexism, particularly, his unfair treatment of professional women—who are mostly portrayed in his work as cold-hearted ball-busters, often suffering unduly harsh punishments. When the career-driven heroine in his Temptation: Confessions of a Marriage Counselor (2013), cheats on her kind but absent husband, she gets AIDS and develops a mysterious, inexplicable limp. The trend is especially bizarre, Cooper argues, considering Perry’s friendship with the most successful black woman on Earth: “Oprah doesn’t seem to understand,” Cooper writes, “that a rich, independent, college-educated chick like her, who shuns traditional marriage, is in Tyler Perry’s world the devil, a veritable, conniving bitch, who hates babies, men, Jesus, and needs a good slap from a sexy black man.”

Much to Cooper’s surprise, shortly after she wrote the post last summer, Perry tracked her down by phone, and asked politely for an explanation. She gave it to him. The details of the conversation are laid out in a recent piece she wrote for Salon. Whether it was Cooper’s influence, or the fact that his audience is slowly expanding, Perry’s latest film, The Single Moms Club, while infinitely corny and full of clichés, is possibly his most nuanced yet. The cast, five single mothers who band together to form a support group, is multi-racial, and its professional women do not suffer for their work. In fact (spoiler alert), they come out on top at the end of the film—happy and gainfully employed. The movie even has its own unofficial “it gets better” PSA—a strange but welcome scene in which the Single Moms Club nods affirmatively at the assertion that “there’s nothing wrong with being gay.” (Perry is often accused of pandering to a homophobic, Christian audience; this scene is a wild departure from his traditionally crude slapstick approach to homosexuality.) Perry’s rising popularity, says Jamel Santa Cruz Bell, co-editor of a textbook about the director, means “people now expect him to depict a wide range of multi-dimensional characters.”

The question is, will he continue to take such an egalitarian approach if it means losing money? The Single Moms Club may be less “problematic” than Diary of a Mad Black Woman, but it made less than a third of the profit. The film, which premiered last month, raked in a measly $8.3 million on opening weekend. (Last year’s Tyler Perry’s A Madea Christmas made more than twice that, and $52 million overall).

However, box office numbers don’t always paint an accurate picture. In 2008, Kennaria Brown, a communications professor at Berea College in Kentucky, conducted research on African-American women’s perceptions of Perry films. The verdict was a “mixed bag.” Older women, says Brown, had fewer issues with Perry’s portrayals of women, while many younger women took umbrage with his unfair treatment of female success. Brown says it’s possible Perry is unkind to his well-heeled women characters because young African-American women are statistically better off than African-American men, both financially and otherwise. Perry may have picked up on that insecurity and exploited it.

Despite this, his female fans are fiercely loyal and more than willing to cut him some slack. After all, Perry is one of popular culture’s only prominent African-American filmmakers to write a multitude of roles for black actors, who are often targets of racial tokenism in white mainstream movies. I’m not black, but I do know what it’s like to endure inferior art in order to see a semblance of oneself on a screen. (My girlfriend and I recently started watching The L Word, a TV drama from the mid-2000s about a group of lesbian professionals living in L.A. It’s profoundly bad. Yet we keep watching it—and not for the dialogue.) I can also imagine it’s refreshing for straight black women—or anyone who is sexually attracted to men, frankly—to see a romantic comedy in which the male lead is not some Owen Wilson milquetoast who can barely string a sentence together without stammering. Perry’s movies may be the last place in romantic cinema where men can have swagger and good intentions simultaneously.

Still, he will never transcend the genre that made him who he is. The Single Moms Club, despite its valiant attempt at nuance, is a tepid, uneven bore. Perry isn’t, and will never be, a very good filmmaker. He produced Precious, but he’ll never make Precious. And he shouldn’t have to. Critics, argues Tracey Ray, a professor at North Carolina State University, “feel he’s in a position to really affect how African Americans are portrayed. But I think, at some point, a person has to transcend race and gain a reputation simply as a director.” Or, in Perry’s case, a screwball comedian and camp writer, who currently carries the burden of an entire minority’s cinematic identity on his shoulders. “Until we have a critical mass of African-American filmmakers in Hollywood,” says Ray, “that will persist.”