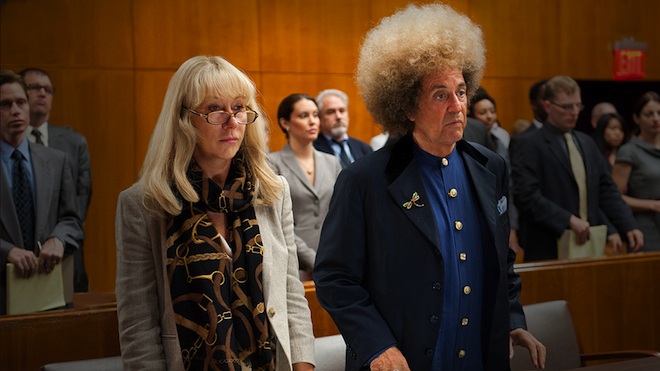 In some ways, Matt Seitz’s review of David Mamet’s Phil Spector (premiering Sunday on HBO) says a lot of what I was going to say. And this article from the L.A. Times has given us a look at Mamet’s distortions of fact, not to mention his reduction of Lana Clarkson to nearly a non-person, in his attempt to argue that Spector was railroaded. I’m still going to try and find some words for it. Lurking somewhere in this basically unsatisfying movie, there’s a potentially interesting two-character play; nearly all the best scenes are set in Phil Spector’s house, and feature Al Pacino ranting and raving while Helen Mirren, as Linda Kenney Baden, tries to bring him down to earth. It’s not the freshest Mamet dialogue, and the tension that should develop between the actors isn’t really there. But it works all right as a series of sketches with Pacino as the comic and Mirren as the straight woman, though even in these scenes you feel like the deck is being stacked in favour of Spector: he may be crazy, but he’s the only person in the movie who’s having any fun, so how can we not root for him?

But this is not a play, it’s a 90-minute TV movie, and so we get a law procedural on top of the two-character play. Lots of discussion about guns and bullets and plastic dummies and putting people on the stand. These scenes are repetitive; Spector doesn’t figure much in them (though they sometimes re-create Spector interviews with Pacino to keep him on screen), and they really don’t add up to a whole lot other than Mamet’s personal spin on the Twelve Angry Men theme: instead of lecturing us on how the principle of reasonable doubt should apply even to the poorest among us, he argues that a crazy rich old guy deserves a fair shake too, and that we shouldn’t rush to assume he’s guilty just because he’s rich and crazy. That may be true, but it probably doesn’t bear repeating as often as it’s repeated in this film.

Besides, as Harriet Ryan notes in her L.A. Times piece, Mamet can’t even seem to make up his mind about what Spector is being railroaded for. Sometimes it seems like we’re supposed to agree with Spector’s belief that he’s being punished for his fame, except that (as Mirren notes early on in the picture) Spector wasn’t really famous any more by the time he was on trial. Since the outside world is rarely glimpsed outside of the occasional protester or reporter – plus one scene with a woman who tries to lecture Linda about defending Spector, and is given a lecture on reasonably doubt in return – it’s hard to know exactly what Mamet thinks is fueling the bias against Spector.

He seems unable to accept the possibility that people are biased against Spector because it looks like he did it, and that’s the thing that’s made this movie more than just an unsatisfying work of fiction. Whatever the disclaimer may say about this being a work of fiction, it does come off as a film made in defense of a particular theory – that Spector is innocent – where the writer-director tried to sidestep or ignore whatever doesn’t fit in with that theory. Even Mamet can’t really sustain the theory for long stretches, and at certain stages it seems like both he and Linda are reaching for some reason, any reason, why he might not be guilty. And HBO’s statement is pretty disingenuous: “Mamet approaches the story of Phil Spector as a mythological one, not as a news story, and the film is not an attempt to comment upon the trial or its outcome. HBO’s goal is to provide a creative platform for three great artists.” As if they’re not counting on the “news story” aspect of this driving people to see it; if Mamet wanted to approach it purely as a mythological story, he could have created a mythological character based on the real thing, as so many people have done in the past. Obviously he has something to say about this particular news story, and wants to convince us to think a certain way about it.

But apart from the irresponsibility of it, it comes off as dramatically limp. There are ways to make an interesting drama about defending an unlikable person who would normally be presumed guilty. Reversal of Fortune, a movie that this one resembles in a lot of ways (including the fact that it’s from the point of view of the defense lawyer, and the theme that rich and horrible people just can’t get a break), tried to deal with the idea that you can never know what happened for certain, and putting the story in the context of larger issues about wealth, class and the law. That movie had its flaws too, but at least it moved, and it had several different ideas you could be interested in. I’m not sure how much substance there is in Phil Spector. If you don’t buy Mamet’s basic argument, then the film doesn’t have much to it except Pacino being a ham, and Mirren devolving into Pacino’s stooge.

It’s hard to discuss this film separately from Mamet’s recent political awakening. I’ve tried not to, because I don’t think there’s a one-on-one relationship between his politics and his art. But the same stridency that has come through in his political writing – the presumption that he is brave for saying what he says and that people are out to get him when they criticize him – comes through in this movie too, in a different way. You sometimes get the impression that Mamet at least likes the fact that Spector is disliked by gun-control protesters and the media. But mostly it just seems like Mamet now takes delight in being contrarian for its own sake. If the movie has a point it’s that people should not let conventional wisdom tell them what to think about a weird old rich guy; people who say the conventional things – or interpret the evidence in a conventional way – are the bad guys. Phil Spector isn’t the hero, but the movie invites you to congratulate yourself if you can buck conventional wisdom and see him as something other than a villain. But sometimes conventional wisdom is right, isn’t it?