Men and beasts in 'The Grey' and 'Tyrranosaur'

A herculean Liam Neeson takes on the wolves, the cold—and some monstrous flaws in the script 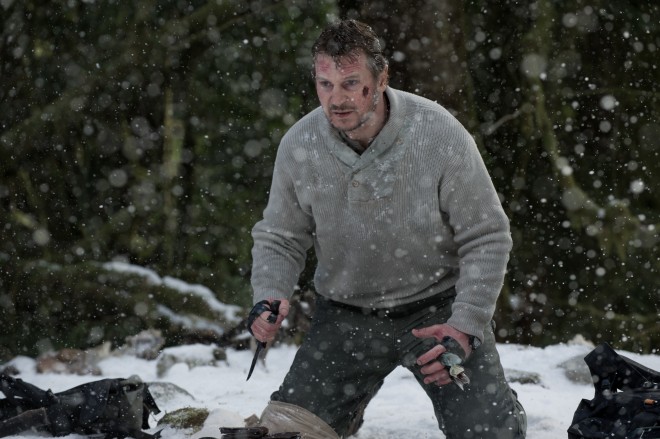 Liam Neeson in 'The Grey'

There’s a fine line between man and beast. That’s the gist of two very different survival dramas about savagery and the human condition, both opening this weekend. In The Grey, a harrowing but preposterous thriller, Liam Neeson stars as the alpha male among a group of plane crash survivors who are stalked by ferocious man-eating wolves. In Tyrranosaur, an exceptionally grim kitchen-sink drama from Britain, Peter Mullan stars as a mean drunk who beats his dog to death in the opening minutes; things go downhill from there.

These movies belong to different genres, but both are what you could call ordeal dramas. Although I would hesitate to recommend either, each has its merits.

The Grey was shot in the snowy wilds of Smithers, B.C., so as a landscape survival saga it offers some rugged wintry vistas (just what we need in January). And as a visceral Survivorman who is doing a lot of his stunts and stuck in the cold without a decent pair of gloves, Neeson is a compelling physical presence, surviving both the elements and a relentlessly dumb script. 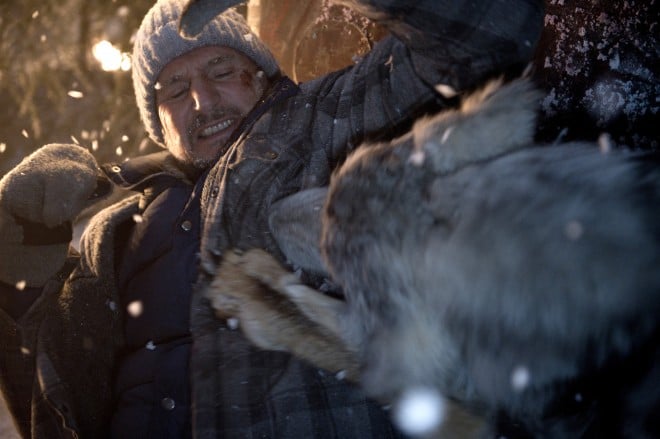 John (Neeson) is employed as a sniper to kill marauding wolves that threaten oil rig workers in a northern outpost. In the opening scenes, after a dreamy flashback that suggest he’s lost his lovely wife, we see John put the gun barrel into his mouth, ready to pull the trigger, only to lose his nerve when he hears the ghostly howl of the wolves. Why that would deter a man from committing suicide is not clear. Next thing you know, John is on a plane loaded with a gang of roughnecks, flying through some violent  turbulence. The Grey will never become an in-flight movie—the plane goes down in the most gruelling plane-crash scene since Fearless.

John is one of seven survivors who struggle to stay alive in the bitter cold, which is the least their problems. They are surrounded by a rogue pack of man-eating wolves that start to pick them off one by one. Environmentalists in general, and Farley Mowatt in particular, would not approve. The wolves are not supposed to be supernatural, but with glowing eyes and satanic dispositions they would be right at home in Twilight or Attack the Block.

As Neeson’s hero battles these critters for supremacy, he also has to contend with a macho hothead vying to be alpha dog in the pack of survivors. Directed as a horror movie by Joe Carnahan (Smokin’ Aces), story certainly has its scary moments. But for me, it lost credibility long before the men make a desperate attempt to escape by slinging a makeshift bungee cord over a cliff. For a guy who seems so at home in the wild, Joseph seems to make a lot of stupid decisions. You have to hand it to Neeson, however. This is one stubbornly committed performance, as he faces the herculean task of defeating the wolves, the cold—and some monstrous flaws in the script. 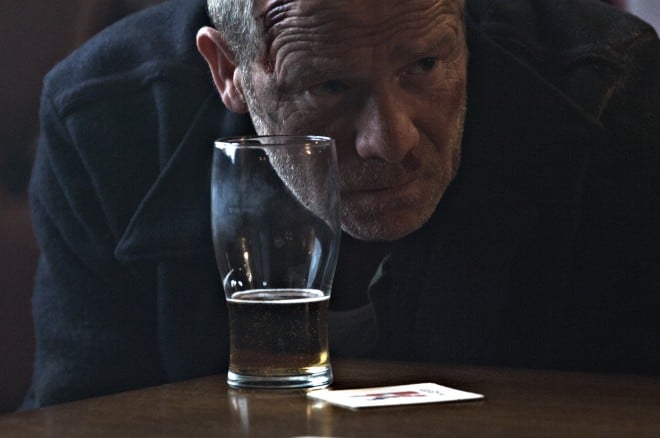 Tyrranosaur, a hit on the festival circuit, is a much smarter, more convincing drama, with superb performances from  Mullen and Olivia Colman—cast as a worker in a Christian charity shop who attempts to rescue him. Mullan tends to specialize in character roles as alcoholic working-class brutes, most recently as the drunken farmer in  War Horse who buys its equine hero at a village auction. Here, as Joseph, an embittered loser, he’s as typecast as ever, but for once he gets to unload his titanic rage into a lead role. It’s Colman, however, who turns out to be the film’s revelation as Hannah, his would-be savior. When Joseph turns up at her store, she takes pity on him only to be met by a torrent of abuse, which she endures with Christian stoicism. It turns out that she is used to turning the other cheek. Hannah is tormented by her own middle-class demons, lubricated by wine rather than beer, as she suffers grotesque abuse at home at the hands of her bipolar creep of a husband.

Actor Paddy Considine makes an impressive feature directing debut with Tyrranosaur. And to be sure, this is an actors’ film, with utterly credible, compelling performances. Yet no matter how much one might admire the craft, being dragged through the hell of these sordid lives is no small ordeal. Tyrranosaur is one of those movies that makes you wonder how, and why, it ever got made, and who on earth will see it.