Men overboard: 'All is Lost' vs. 'The Counselor' - Macleans.ca

No one’s even trying to save the world these days. In one movie after another, desperate people are just trying to save themselves—Sandra Bullock in Gravity, Chewetel Ejiofor in 12 Years a Slave, Tom Hanks in Captain Phillips. And this week two new movies offer nameless protagonists fighting to survive a dire fate. They are a study in contrasts.

All is Lost is an almost wordless drama with a cast of one. Long after we’ve assumed that Robert Redford is just coasting on his reputation, this 77-year-old icon unleashes the most powerful, and physical, performance of his career. Directed by J.C. Chandor (Margin Call), he plays a lone sailor fighting to save his wrecked yacht, and himself, from a calamity at sea. It’s hard to say which is the more impressive stunt: acting solo with no dialogue for an entire movie, or doing much of it immersed in water.

The Counselor has too much  dialogue and too many stars all dressed up with nowhere to go. This high-minded piece of pulp fiction marks the screenwriting debut of another legendary lion in winter, 80-year-old American novelist Cormac McCarthy. Director Ridley Scott has assembled an A-list dream team: Michael Fassbender, Penelope Cruz, Javier Bardem and Brad Pitt. Not to mention a luridly tricked-out Cameron Diaz, who steals the movie in the role of a sociopathic femme fatale. Sadly, the movie is not worth stealing. The biggest disappointment is McCarthy’s original screenplay, especially when you consider the films that have been made from his books—No Country for Old Men, The Road and All the Pretty Horses.

I know, I know. Given the choice of watching a briny old man struggling to stay afloat, or gorging on a glam buffet of eye-candy styled by Ridley Scott, the latter sounds infinitely more inviting. But All is Lost is a far more enjoyable film. Against all odds, it succeeds as a highly original feat of gripping drama. The Counselor is just a bunch of stuff. Sexy, well-dressed stuff that refuses to cohere to McCarthy’s overwritten script. A movie that fails against all odds, it’s an embarrassment of talent in search of a story.

Although Redford is known for his verbal roles and liberal postures—from the rogueish repartee in Butch Cassidy and the Sundance Kid to the Watergate sleuthing of All the President’s Men—he’s jock at heart. From his youthful days as a California surf bum, Hollywood’s eternal golden boy has remained a nature-loving athlete, a side of him that we’ve seen in films like Jeremiah Johnson and Downhill Racer. He’s always been a solidly physical presence on screen. 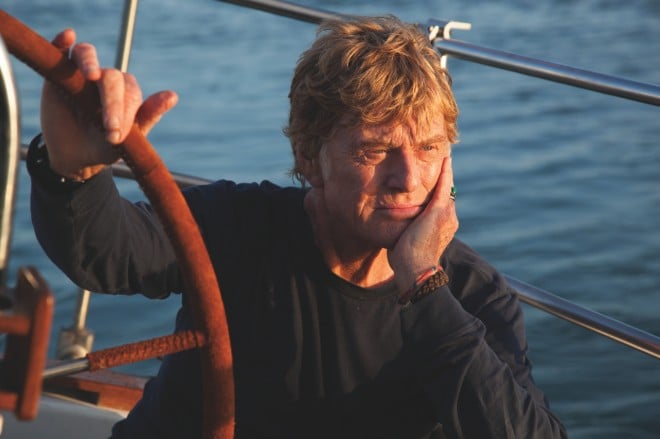 Redford doesn’t have much experience as a sailor, but you’d never know it from watching All is Lost. Just as Tom Hanks convinces us that he has intimate knowledge of commanding a container ship in Captain Phillips, Redford seems utterly in his element as the lone skipper of a 39-foot yacht—which, coincidentally, gets severely damaged by a collision with a stray shipping container in the Indian Ocean.

The collision, which jolts Redford’s character from his sleep, knocks out the boat’s radio and navigation equipment. The sailor addresses the crisis with a mix of irritation and methodical calm as he patches the breach in the hull. He then sails into the path of major storm that, without his radio gear, he cannot see coming. The narrative unfolds as one urgent task after another, and it unfolds as a fine-detailed portrait of ingenuity and skill under pressure. Apparently Chandor knows a thing or two about boats—whatever’s going on certainly looks authentic.

Redford does a lot of his own stunts. That, along with Chandor’s inclination to let a scene run without a cut, makes the performance feel seamless. We sense we’re watching a veteran actor being pushed to the limit, which neatly coincides with the character’s dilemma. Every line in Redford’s weather-beaten face seems invested in the struggle.

After making his feature debut as a writer-director with the Wall Street intrigue of Margin Call—an ensemble drama set almost entirely indoors—Chandor has pulled off a very different kind of feat. Yet the movies are not entirely dissimilar. Margin Call is like a submarine movie: a chamber piece that sends us on a claustrophobic descent into the depths of the financial crisis. All is Lost is about one man alone on the open ocean, but we feel equally trapped.

First the good news. In the opening scene, which pans from billowy white curtains to a white sheet shrouding a naked couple, then ducks under it, we get the impression that we’re about to watch one of the sexiest movies Ridley Scott has attempted. The playful pillow talk between Fassbender, as the title character, and Cruz, as a new girlfriend warming to his charms, crackles with erotic tension. As if conducting phone sex between the sheets, they talk about what they want to do to each other. As Cruz’s character shyly reveals her desires to her more experienced lover (hey, he was in Shame), Scott’s camera dotes on her innocent, freckled face in full close-up as if we might never see her again. It is, in fact, her only good scene.

The shadowy plot, which McCarthy’s script works hard to keep obscure, revolves around the Counselor’s dubious decision to join a business venture with a drug cartel. It brings him into contact with a freaky nightclub owner—a clown-like Bardem, sporting an even stranger hairdo than the one he wore in No Country for Old Men. He lives in mortal fear of his ruthless paramour (Diaz), an oversexed predator who has a pair of pet leopards and a leopard-skin tattoo down her back. Then there’s Brad Pitt who breezes through the movie in a white stetson, as a mysterious middleman warning the Counselor not to get involved. Getting involved with men like this inevitably means getting too involved. He says that many different ways. (The word “cautionary” is used more than once in a script that advertises itself as a cautionary tale.)

Despite a lot of silky visuals and sexy trappings, The Counselor is oddly static. Scott directs the hell out of it, but he’s continually stalled by McCarthy’s obtuse script, which tries to make a virtue of circling the plot and never penetrating its skin: narrative interruptus. When Dean Norris, who played the DEA agent Hank in Breaking Bad, creates a virtual spin-off character in a cameo, it only reminds us how slow, fake and stilted this Tex-Mex drug drama seems after Breaking Bad.

Amid the existential torpor, however, there are some electrifying moments, the kind of outrageous bits that tend to show up only in failed movies. (If you’re queasy about spoilers, you might want to skip to the next paragraph.) Diaz does the splits and has sex with a car windshield. A motorized garotte called a bolo—which slowly cuts the victim’s head off as he is strangled—is described early on. So we know someone is going to use it. Scott has the gall to cut from the suction sound of a severed head being dumped from a motorcycle helmet to a popping wine cork in fancy restaurant.

McCarthy’s aphoristic dialogue, meanwhile, lends the actors some bravura moments, but it above all, is the film’s downfall. The script is overstocked with lines so cool and original that no one would actually say them—certainly not the high-gloss losers who populate this movie. Lines like:

“Truth has no temperature.” – Diaz.

“You don’t know someone until you know what they want.” – Pitt

“Life is being in bed with you. Everything else is just waiting.” – Fassbender

“Greed really takes you to the edge.” – Diaz.

“To see a quarry killed with elegance is always moving to me.” – Diaz

Maybe the script looked good on the page.

But it brings to mind what the late Elmore Leonard said was the most important rule for writing:  “If it sounds like writing, I rewrite it.”