Sarah, Ben and the seven psychos 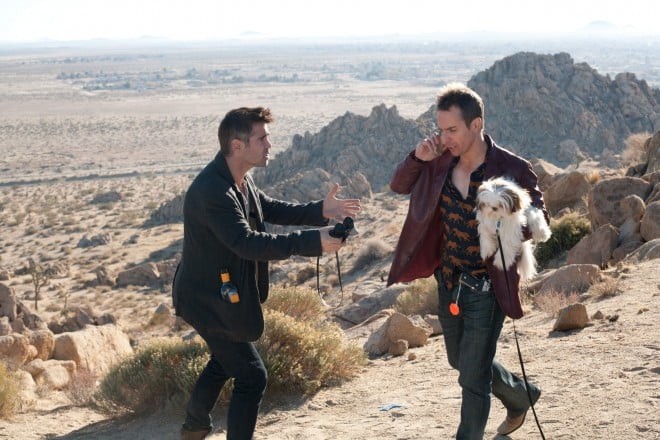 Deconstruction is the style du jour this weekend, with the release of five wildly diverse movies that all just happen to be about the artifice of filmmaking or the mirage of celebrity. Three are of special interest to Canadians: Ben Affleck’s Argo, a Hollywood satire/suspense thriller about a fake movie that served as a CIA cover for Canada’s 1980 rescue of Americans in Iran; Stories We Tell, Sarah Polley’s stunning home movie memoir about the mystery of her parentage; and Antiviral, Canadian director Brandon Cronenberg’s morbid sci-fi vision of a world where fans pay to be injected with patented viruses that have infected celebrities. The other two are Seven Psychopaths, a pulp comedy about a screenwriter making a movie called, uh, Seven Psychopaths; and Nobody Walks, an erotically charged diversion co-written by Lena Dunham (Girls), about a promiscuous young artiste who cuts a carnal swath through a family while finessing her experimental film with the man of the house. I’ve already written extensively about Polley’s gripping documentary, and interviewed the director. Somewhere in our trail of  coverage, I even called it a masterpiece, not a word I’m inclined to sling around.

As for Argo, I have mixed emotions. When I saw the film at TIFF, I enjoyed it. Echoing recent events with timely prescience, Affleck has taken a vintage tale of historic intrigue and spun it into a deft mix of Hollywood satire and political thriller. Argo was the runner-up for the People’s Choice Award at TIFF, and no doubt one reason it was such a crowd-pleaser in Toronto is that it’s riddled with more Canuck references than most of the Canadian movies premiering at the festival. But while Affleck gives Canada a hearty slap on the back for housing the six American fugitives in its embassy during the 1979 Iran hostage, as it turns out, the movie steals the credit from our then-ambassador Ken Taylor, who orchestrated their escape. The movie’s hero is CIA man Tony Mendez (Affleck), who concocted the bizarre cover story that cast Taylor’s house guests as a Canadian film crew. During TIFF, I contacted Taylor, who voiced his displeasure and corrected the record in an exclusive Maclean’s interview, and that prompted a Hollywood version of a diplomatic incident. As a result of that, Warner Bros rushed to make amends in a fashion that must be unprecedented in the annals of studio diplomacy: Affleck flew Taylor to L.A., allowed him to rewrite the movie’s insulting postscript to give Canada its due, had him record a DVD commentary, and made him the guest of honour at a Washington premiere Wednesday. When I talked to Taylor again recently, he admitted that Affleck, who didn’t write the script, was a decent fellow, and was sanguine about the mess Argo makes of history. “There’s nothing we can do about it,” he said, yet he felt it was vital to point up the script’s outlandish fictions, and restore Canada’s place in the historic narrative. Of course no one cares about any of this except Canadians, which makes it remarkable that Hollywood went as far as it did to exert damage control. (Then again, there are many Canadians among the Academy voters in Los Angeles.)

Seven Psychopaths That’s a lot of psychopaths for your money. And while we wait for Christmas, which brings us Quentin Tarantino‘s Django Unchained, this zany pulp comedy serves as a good methadone surrogate for a Tarantino fix, with the kind of bent plot, baroque dialogue and meta-movie hijinks that Quentin pioneered.  Writer-director Martin McDonagh (In Bruges) directs a cracker-jack ensemble cast featuring a wonderfully earnest Colin Farrell as a bone-headed screenwriter and Sam Rockwell as his best friend, an unemployed actor who tries to help him write the script, while making his living as a dog-napper with Christopher Walken. Woody Harrelson and Tom Waits pop up among the various real-life psychopaths who make the script-within-a-script into reality. McDonagh’s own script is too clever by half, and so over-torqued in the final act that it loses traction. But getting there is more than half the fun, as we sit back and watch the acting—most notably the blithe tap-dance of Walken’s splendidly off-kilter performance. 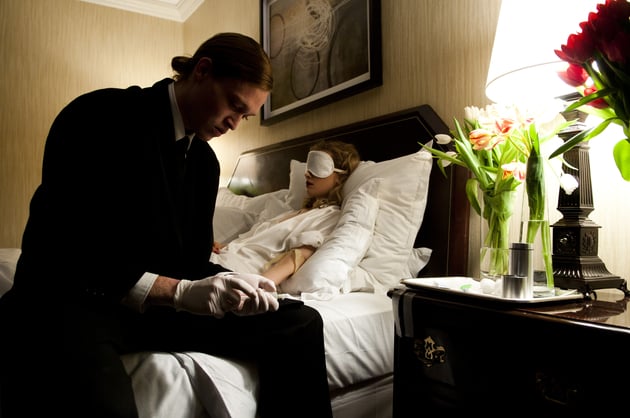 Antiviral Whatever I think of Brandon Cronenberg’s first feature, no one can say I haven’t given it a chance. I first screened Antiviral in Cannes, where it premiered in the sidebar program Un Certain Regard, while his father’s Cosmopolis premiered in the main competition. Since then the director recut it, so I was asked to see it again. I couldn’t detect the changes, but my first impressions of the film, which I’ll reiterate here, were confirmed. Antiviral is a sci-fi drama set in a fame-obsessed dystopia where pathogens that have infected celebrities are purchased for injection by their fans. It gives a whole new meaning to that red-carpet phrase “Who are you wearing?”

In the opening minutes of Antiviral, the first moment of “violence” is a close up of a syringe penetrating the lip of a fan, who has purchased a strain of Herpes virus harvested from a star.  It’s the first of many, many needle scenes, both injections and blood drawings. Jean-Luc Godard famously said, “All you need for a movie is a girl and a gun.” After seeing this new variation on biological horror, we can amend that to: “All you need is a girl and a needle.” The girl in this case is a generic celebrity named Hannah Geist, played by Sarah Gadon (who also stars in dad’s A Dangerous Method and Cosmopolis). She is absent or silent and semi-conscious for most of the movie, although her shining face is ubiquitous on posters of her that adorn the virus-dispensing clinic.

Antiviral‘s austere intrigue moves at a narcotic pace and is set in a world of monochromatic gloom. Implicitly satirical, but not funny, the movie imagines a perverse version of our own commodified celebrity culture. The narrative is almost entirely driven by one literally feverish performance, from Caleb Landry Jones, cast as Syd, a clinic employee who pirates celeb viruses but, in sampling the merchandise, ends up contracting a potentially fatal disease. As his character becomes progressively sicker, he has to crack a byzantine mystery to save himself.

There’s much to admire in Antiviral. It’s conceptual design is both ingenious and sophisticated. This is a film with something to say, and its potent message is grafted to a highly original metaphor. But the drama is bloodless. It’s hard to care about the characters, who seem immune to any emotional or moral imperative. The narrative is locked in the oblique psyche of the protagonist, a cipher who seems to have nothing at stake but his own survival. Other characters bop in and out of his alienated world, notably a surly black-market butcher (beautifully played by Joe Pingue) who sells fillets of synthetically cloned celebrity meat. But Syd is an anti-hero in dire need of a relationship, any relationship. And the closest he gets is a comatose celebrity played by Sarah Gadon in a sleep mask. Canadian cinema has toyed with necrophilia over the years (Kissed), and while Antiviral doesn’t go there, its obsession issue is from the same strain of necrotic angst.

The 32-year-old Brandon Cronenberg swears his movie bears no conscious influence from his father, but he’d be naive not to realize that by plunging into a genre his dad pioneered—biological horror—he’s bound to invite comparisons. In some ways, the son out-Cronenbergs the father in his pathological rigour. But Antiviral‘s narrative, which is more essay than drama, lacks the subversive glimmers of warmth and wit that make David’s films so deliciously palatable, no matter how dire they get. The film’s flaws, however, are rooted in intellectual ambition. But its director has obvious talent and I’ll be curious to see where he takes it and what he can learn from his mistakes. 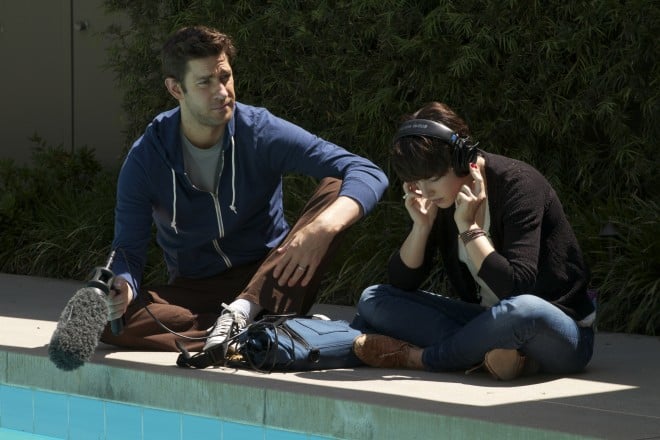 Nobody Walks With co-writer Lena Dunham, 30-year-old American director Ry Russo-Young has made a taut, sexy tale about art and infidelity disrupting a nuclear family with a chain reaction of transgressions. Martine (Olivia Thrilby), a young art photographer, moves in with a family in the trendy L.A. suburb of Silverlake while Peter (John Krasinski), a Hollywood sound editor, helps her finish her experimental film. Martine, an insouciant beauty with a dark bob, looks like she could have stepped out of a Godard film and seems compelled to seduce whomever she’s with, including both Peter and his pool-boyish assistant. Meanwhile Peter’s sympathetic wife (Rosemarie De Witt), who invited Martine to work with her husband, watches her family begin to unravel as it becomes obvious that he’s editing more than her sound.

The story’s triangular maze of sexual rivalries has the schematic symmetry of TV drama.  But there’s a pleasing post-feminist balance among its ensemble of characters. No one is judged or stereotyped. The beautiful interloper is not demonized as a home-wrecking Other Woman. She’s a coy catalyst who brings the family’s inner tensions bubbling to the surface. Reminiscent of  Laurel Canyon, another off-Hollywood tale of sex’n’art with a swimming pool, Nobody Walks may be a guilty pleasure. But the pleasure of its empty calories is tangible in the heat of the performances, the lush visuals, and a sound design that riffs on the story’s central conceit—this may be the first movie where foley recording is used as foreplay. Also, the film comes with a built-in bonus track: eventually we get to see Martine’s experimental short, a black-and-white study of magnified insects.

For now this delictable slice of art-house cheese is being released only in Toronto. But on video it will serve as an ideal fodder for a stay-at-home date night.