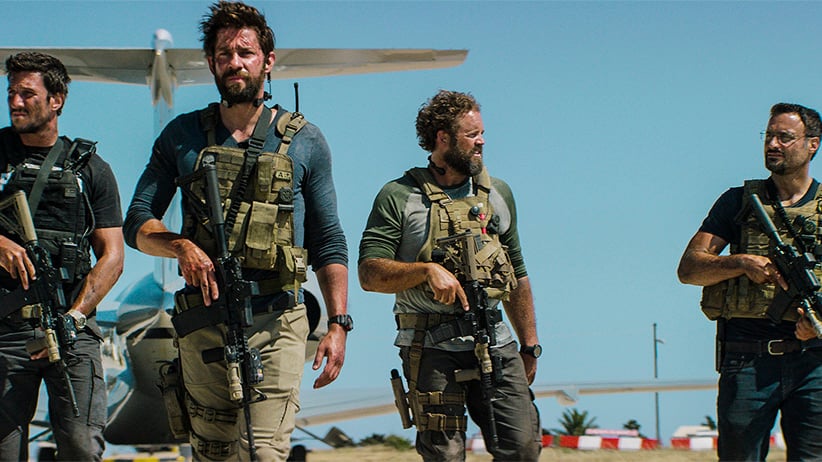 In director Michael Bay’s 1998 mega-blockbuster Armageddon, a team of working-class deep-core drillers is recruited by NASA to help blow up an enormous asteroid. Far from seeing the outer space suicide mission as some noble, patriotic (or terrestrial) duty, the blue-collar crew has some demands, which their de facto leader (played by Bruce Willis) cannily negotiates. Among the disparate pipe dreams is one stipulation that’s non-negotiable: they never want to pay taxes again.

It may seem like a tossed-off joke—“Ha-ha! Taxes are stupid! Who wouldn’t want to never pay taxes again?!”—but this snatch of small-government, pseudo-libertarian thinking is consistent with a deeply political current that courses through much of Bay’s work, and surges with tsunami force in his latest film, 13 Hours: The Secret Soldiers of Benghazi.

By now, it’s become de rigueur to accept that Michael Bay is something of an auteur: expressing inimitable stylistic flourishes that distinguish his films in the assembly-line of Hollywood studio filmmaking. A blogger known as “the Bitter Script Reader” (he reads Hollywood screenplays for a living, hence the anonymity) has even published a tongue-in-cheek e-book, called Michael F-ing Bay: The Unheralded Genius in Michael Bay’s Films. “Bay was trying to escape that particular genre of film by destroying the audience’s appetite for it once and for all,” he says via email. “When that scorched-earth approach failed to have the desired effect, Bay started sneaking more political subtext into his films, and there was something incredibly satisfying at decoding what Bay was ‘really’ saying.”

Beyond style and sheer testosterone, Bay’s auteur sensibility also reflects his politics. Bay was an early pupil of prominent Hollywood conservative Jerry Bruckheimer, who produced Bay’s early blockbusters. In 2001, Film Comment’s Kent Jones prophesied that “history will undoubtedly prove Bay to be the prize racehorse on Bruckheimer’s stud farm.” He was right. Bay is the fourth-highest-grossing filmmaker in history, behind Steven Spielberg, Peter Jackson and James Cameron. Yet unlike Bruckheimer—or celebrity Republicans Kelsey Grammar or Clint Eastwood—Bay’s been more bashful about his politics, preferring to weave his ideology into the CGI-augmented textures of his movies.

Bad Boys II doubles as a Bay of Pigs rethink, with the titular cops invading Cuba to take down a maniacal drug lord. In 2013’s crime caper Pain & Gain, Mark Wahlberg’s scheming bodybuilder believes it’s “unpatriotic” to be scrawny and lazy, a disgrace to America’s hulking stature as “the most buff, pumped-up country on the planet.” Even 1996’s The Rock, about renegade U.S. Marines who occupy Alcatraz and point deadly gas-rockets at San Francisco, affords a measure of sympathy for its hard-done-by military bad guys. And what are the Transformers films if not warnings against foreign (read: “alien”) automobiles?

Now comes 13 Hours. Dramatizing the 2012 Benghazi attack, in which Islamist militants laid siege to a U.S. diplomatic compound in Libya and battled a handful of CIA security contractors, it’s Bay’s first explicitly political movie. In American conservative circles, the attacks were blamed on the Obama administration’s failure to secure the Benghazi compound. So-called “truthers” even believed President Obama and Secretary of State Hillary Clinton were colluding with terrorists.

That 13 Hours, a celebration of the security team’s lone-wolf heroism, is being released in an election year that sees Clinton as the Democratic party’s candidate of choice is surely no coincidence. “Will a film about Benghazi itself prove to be too on the nose?” asks the Bitter Script Reader. “I don’t know, but I’m very much looking forward to finding out.”

For his part, Bay claims there’s no agenda, telling the Wall Street Journal his film “doesn’t get political at all.” The movie doesn’t even mention Clinton by name. But that seems disingenuous coming from a director responsible for some of the most patriotic American movies in recent history. It’s like claiming Armageddon isn’t about a giant space-rock hurtling toward Earth. Then again, maybe it isn’t. Maybe Armageddon is really a plea for lower taxes and smaller government.