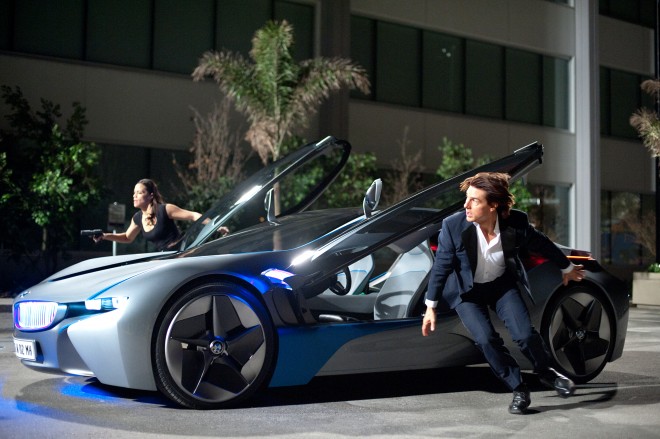 I came to Mission: Impossible—Ghost Protocol expecting the worst. Five years have passed since the previous installment, which was so lame it looked like Tom Cruise’s days as super spy Ethan Hunt were numbered. But what a surprise!  Ghost Protocol, the fourth movie in the series, kicks the franchise back to life with a defibrillator thump of adrenaline and a sharp sense of style. There’s a great line in the movie—”Failure for a terrorist is just a rehearsal for success”—which may also apply to producers of  blockbusters. Here they took a gamble that paid off, by handing the reins to Brad Bird, who has made animated hits like Ratatouille and The Incredibles but has not made a live action feature until now. You’d never know it. The action scenes pop and sizzle, with a vertiginous sense of perspective that seems inherited from his animated work. Architecture plays a leading role—from Cruise rappelling off a 123-storey skyscraper in Dubai to dropping through the spiral core of automated parking garage that looks like a car-and-concrete version of the Guggenheim. High tech shades of Vertigo.

Cruise, who handles a lot of his own stunt-work, looks ageless, toned and torqued. He has a strange body, especially when he sprints, his arms jack-knifing to cartoon-like heights. Tom is always the Man Who Tries Too Hard. In this well-oiled machine of a movie he’s one well-oiled machine of a man. He’s so immaculate you can’t help but wonder if Tom Cruise is, in fact, an alien. Or simply a Scientologist. Fortunately, he is surrounded by actual human beings, including two terrific character actors.  His fellow operatives are a haunted analyst (The Hurt Locker‘s Jeremy Renner), a very funny rookie communications whiz (Shaun of the Dead‘s Simon Pegg), and a no-nonsense babe (Paula Patton).

The wildly implausible plot (it’s not called Mission Impossible for nothing) reboots the Cold War, sending Ethan Hunt on a scenic, Bond-like quest to save the world from total nuclear annihilation. His mission is to stop a lunatic terrorist (Michael Nyqvist) from using Russian launch codes to trigger a missile attack on the U.S.  (He has some crackpot theory about erasing civilization starting from scratch). The IMF (that’s International Mission Force, not International Monetary Fund) is falsely implicated in a massive explosion at the Kremlin, forcing the U.S. president to to disavow the agency and initiate “Ghost Protocol” and send it underground.

The mission takes Cruise and his crew from Moscow to Dubai and Mumbai. Buildings are a big attraction, the biggest being the world’s tallest skyscraper in Dubai, an icicle-like tower in the desert that serves a jungle gym for Cruise as he scales it with digital gloves. Window washers gone wild! The buildings are like giant gadgets, and the Mission franchise, like its Bond cousin, has always been about gadgets. The previous MI movie series now seems ancient; it predated the invention of touch-screen smart phones. In this picture, hand-held devices, from phones to tablets, seem more prevalent than guns. The narrative technology has also been tweaked. Though the action is stocked with cliches,  they take on some novel twists. Instead of having Tom Cruise trying to outrun a fireball, he tries to outrun a dust storm in Dubai.   There’s also a savage evening-gown catfight between Patton and an assassin played by Léa Seydoux; a corkscrew serves as a weapon.

After we’ve toured Moscow, Dubai and Mumbai—and seen Cruz get tuxed-out like 007 in a Bollywood party scene featuring Anil Kappoor—the action gets jammed in overdrive during the final act. Then things really slow down in a turgid denouement about the fate of Ethan Hunt’s wife. At that point, Cruise has finally stopped moving, and as he puts the plot to bed, amid all the clunky explanation, we realize we don’t give a tinker’s damn about his character or his wife. Just the action, served straight up.

Speaking of tinkers, Tinker Tailor Soldier Spy opens in select Canadian cities this weekend. Based on the 1974 spy novel by John Le Carré, it’s a Cold War espionage thriller that’s actually set during the Cold War. Unlike Mission: Impossible, this is no action blockbuster. It’s an Oscar-pedigree ensemble piece directed with exquisite grace by Sweden’s Thomas Alfredson (Let the Right One In). Gary Oldman gives a sly, bone-dry performance as spy George Smiley, who is dragged out of retirement to ferret out a mole, if you’ll excuse the mixed mammal metaphor. He’s flanked by a superb men’s club of a cast—Colin Firth, Tom Hardy, Toby Jones, Mark Strong—each acting with his own urbane style of understated force. But don’t ask me to even begin to describe the byzantine story. It passed before my eyes like as an utterly incomprehensible puzzle. The plot seems to have been compressed into a mysterious shorthand.  I read the book when it came out, more than three decades ago, and don’t remember much. Those who have read the book more recently, or seen the mini-series, may not find the film so challenging. But no matter how hard I focussed, and tried to keep track, the movie made me feel stupid. It was a bit like watching a film in another language without subtitles. Its cinematic virtues, from the wonderful dour art direction to the silky camera work, became that much more apparent. But sometimes it’s also nice to know what the hell is going on.