Akin to 'Incendies,' but on a smaller canvas, it's an immigrant tale with irresistible charm 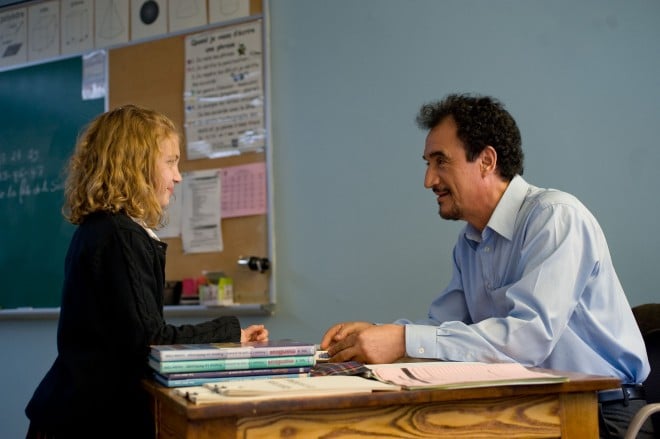 With impeccable timing Philippe Falardeau‘s Monsieur Lazhar is being released just three days after its Oscar nomination for Best Foreign Language film was announced. It’s not favoured to win. Even Falardeau would be surprised to beat Iran’s hugely acclaimed A Separation, which is also nominated for Best Original Screenplay.  But Monsieur Lazhar, which racked up a string of honours (including the Rogers Best Canadian Film Award from the Toronto Film Critics Association) is eminently Oscar-worthy. This is a small but perfect gem of filmmaking.

It bears a certain resemblance to last year’s Canadian Oscar nominee, Denis Villeneuve’s Incendies: it hails from the same producers, it’s based on a Quebec stage play, and has an immigrant theme. But as Falardeau himself has pointed out, it’s a less ambitious picture on a smaller canvas. While Villeneuve’s locations ranged from the Montreal to the Middle East, most of the action in Monsieur Lazhar is confined to a classroom. It’s reminiscent in some ways of Laurent Cantet’s Entre les murs (The Class), which won the Palme d’Or  in Cannes in 2008. But Cantet’s film was about the culture shock in a French classroom between immigrant teenagers and the formal Frenchman teaching them. Falardeau’s movie offers a different spin: an Algerian refugee wrapping his head around a classroom of Quebec kids.

Played with subtle yet irresistible charm by the French-Algerian comedian Mohamed Fellag, Bachir Lazhar gets himself hired to replace a teacher who has hanged herself in the school. He is a mysterious, stoical figure whose gentle smile masks a tragic past. And as he tries to heal a traumatized class, this soulful father figure turns out to be as much a student as the kids in his class. Beyond that, it feels wrong to dish up any plot summary. Bachir wins over the audience just as he wins over his pupils, and the enigma of his soulful character is a large part of the film’s magic. The film’s slender narrative is best experienced fresh.

What’s remarkable about Monsieur Lazhar is that the original play was a one-man show. With immaculate realism, Falardeau has fleshed out a entire world  from what began as a theatrical monologue. The director has shown a knack for working with children before, in  C’est pas moi, je le jure! (2008). And the kids in his cast are richly drawn, fully-formed characters, uncontrived even when precocious.

This is the kind of movie that takes you blissfully unawares. The emotion that sneaks up on you over the course of the story is so unlike the programmed sentiment of Hollywood movies. By the time the final credits roll, you feel you’ve been party to a small miracle.

It’s also worth noting that Quebec’s most exciting directors are being drawn to multicultural stories while remaining firmly rooted in their own culture.  While various English Canadian directors make co-productions with utterly non-Canadian stories and settings  (A Dangerous Method, The Whistleblower, The Bang Bang Club, Water,  Cairo Time)—not that there’s anything wrong with that—some of Quebec’s most acclaimed filmmakers are telling Quebec stories that are mined with multicultural themes. That’s quite an evolution from the wave of auteurs who defined Quebec cinema in the 1970s and 80s—men like Gilles Carle, Claude Jutra and Denys Arcand. Their characters and settings were pure laine Quebecois, and the cultural divide involved Anglos, not immigrants.