Portrait of Sherlock as an old man

'Mr. Holmes' is not just another Sherlock Holmes adaptation in a saturated field. It's a remarkable elegy to aging. 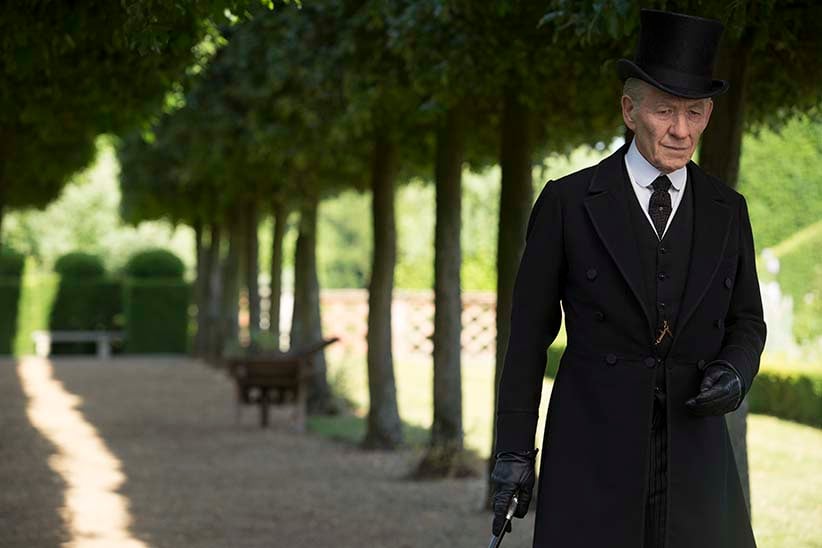 Sherlock Holmes holds the record for being the most frequently portrayed character in fiction, with more than 250 TV and movie credits to his name. A who’s who of actors has taken on the challenge of playing the aloof, cerebral English detective. He’s been portrayed as a callow youth, a middle-aged man, and every demographic in between. But a liver-spotted, grumpy retiree? Reboots of iconic characters as senior citizens are generally unheard of, but that’s the version of the detective that hits screens in Mr. Holmes, and it breathes new life into a much-seen character.

In this film, Holmes isn’t just retired, he’s a crumbling 93. The Second World War is over and he’s living in a rambling stone house in the beautiful South Downs of Sussex. His only companions are his bees. The detective hasn’t taken a case in years, but he’s still recognized. “Is that him?” whispers a woman as Holmes passes at a train station.

All is not well. Holmes is not enjoying his old age. A man famous for his razor-sharp mind, which could see patterns in crimes that elude ordinary experts, is being betrayed by his own brain. Senility is inexorably advancing. He tries to cope by writing names in pencil on his cuffs, but the knowledge that he is losing the most important part of himself—his vaunted intellect—is purgatory. In Mr. Holmes, he desperately tries to recall details of a 30-year-old case that forced him to abandon his profession, his home on Baker Street, and his friends. “I chose exile; I must have done something wrong,” he complains.

Holmes is magnificently portrayed by Ian McKellen (Gods and Monsters, Lord of the Rings) as a stooped, rheumy-eyed man, distressingly unsure of his acumen and his future. His posture and expressions are as dishevelled as his clothes, a stark contrast to McKellen’s immaculately controlled, straight-backed dandy seen during flashbacks to that case in 1919.

More than anything, Mr. Holmes is a study in the “incomprehensible loneliness” felt by a man after a lifetime of isolating himself from time-consuming emotional attachments. There is no Dr. John Watson, housekeeper Mrs. Hudson, nor police inspector Lestrade. Instead, Holmes’s house is occupied by a widowed housekeeper (Laura Linney) and her young son, Roger (Milo Parker), who befriends Holmes and, by pushing him to remember the case, becomes a new Watson.

For all the incarnations of Holmes, Chris Redmond, creator of the Sherlockian.net website, knows of only one other retired Holmes. It was in a one-hour TV drama from 1955 called Sting of Death, featuring Boris Karloff, about a retired beekeeper called Mr. Mycroft (the first name of Sherlock Holmes’s brother). The distinct lack of grey-haired versions is partly explained by the fact that there are only three brief mentions of the detective’s retirement. Meanwhile, creators have dozens upon dozens of stories to mine for plots of more conventional remakes.

Mr. Holmes may not feature virtuoso displays of deductive prowess. Its elegiac ode to aging, however, is no less compelling than the more youthful reimaginings of Holmes, of which there have been so many of late.

“Uh oh, another Sherlock Holmes film,” was Redmond’s reaction upon hearing of the new movie. It follows on the heels of films starring Robert Downey Jr., a U.K. series featuring Benedict Cumberbatch, and a New York version, Elementary, with Jonny Lee Miller. Redmond notes that most incarnations set Holmes in contemporaneous times. Raymond Massey portrayed him in the 1920s in offices full of stenographers and adding machines; Basil Rathbone’s movies from the 1940s had Holmes fighting the Nazis in the Second World War; and today’s Cumberbatch is pitted against power-hungry media barons. (In a twist, Cumberbatch will portray a Victorian-era Holmes in a one-off episode later this year.)

There are loads of stories about intelligent men who solve crimes. But something in the dichotomy of Holmes’s outward success and inner failings keeps attracting writers, directors and actors. As the detective himself says in Mr. Holmes, “Human nature is a mystery that logic could not illuminate.”