Find all the stories up for prizes right here 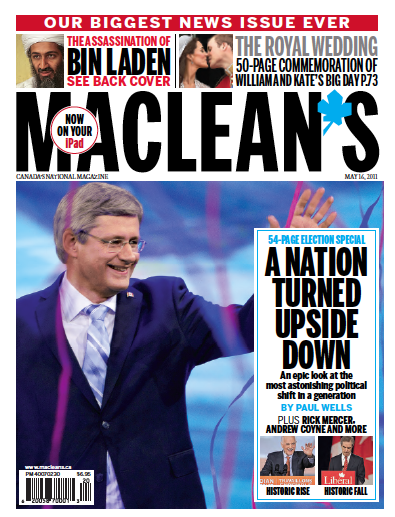 Maclean’s is thrilled to be nominated for 18 National Magazine Awards for our work in 2011. Two special tributes–the first in September to Jack Layton and the second in October to Steve Jobs–are up for Best Editorial Package. Our  2011 Election Central hub, our Canada’s Most Dangerous Cities package and  Jessica Allen’s coverage at TIFF are all up for Best Multimedia Feature. Meanwhile, our 32-page special report on Japan after an earthquake, a tsunami and nuclear disaster struck the country, is nominated in the category of Words & Pictures. And Emma Teitel, who after completing a three-month internship with the magazine in the summer, came on as a columnist–perhaps the youngest ever at the magazine–is up for Best New Magazine Writer for her piece on the perils of Facebook when it comes to privacy for teens.

Perhaps most satisfying is that the biggest issue ever in the 106-year-history of the magazine is up for Best Single Issue. Who could have predicted a Canadian federal election delivering a majority government, a royal wedding and the assassination of the world’s most loathed terrorist, Osama Bin Laden, would all take place within a single week in May? Not Maclean’s. But we turned around 179 pages in less than a week.

The other 10 nominations, listed below with links to the stories, are in written categories:

The National Magazine Awards are Thursday night in Toronto.