Needles and damage done: 'Antiviral,' 'Lawless,' and 'The Hunt' at Cannes 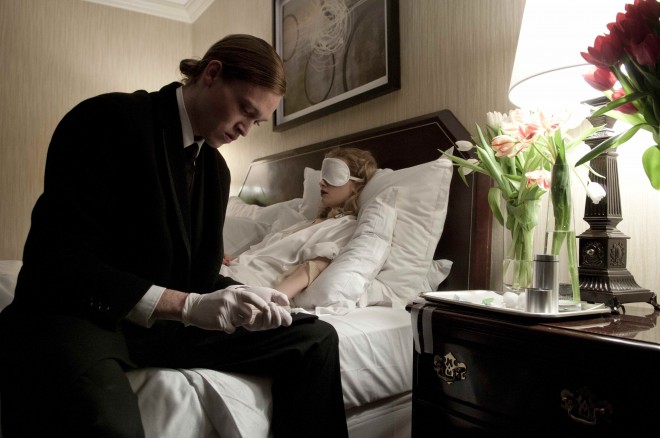 I once asked David Cronenberg what, if anything, makes him squeamish as a movie-goer. Without hesitation, he replied: “Needles.” That’s right. The man who has made heads explode and parasites erupt from the body, is scared of needles. And I couldn’t stop thinking about that as I watched this afternoon’s Cannes press screening of Antiviral, the feature debut by David’s 32-year-old son, Brandon Cronenberg. Antiviral is a sci-fi drama set in a fame-obsessed dystopia where pathogens that have infected celebrities  are purchased and injected by their fans. It gives a whole new meaning to that red-carpet phrase “Who are you wearing?” The film never asks that question, but if it did, its answer would be something like: [celebrity name here] Herpes Simpex 2.

In the opening minutes of Antiviral, the first moment of “violence” is a close up of a syringe penetrating the lip of a fan, who has purchased a strain of Herpes virus harvested from a star.  It’s the first of many, many needle scenes, both injections and blow drawings. Jean-Luc Godard famously said, “All you need for a movie is a girl and a gun.” After seeing this new variation on biological horror, we can amend that to: “All you need is a girl and a needle.” The girl in this case is a generic celebrity named Hannah Geist, played by Sarah Gadon (who also stars in dad’s A Dangerous Method and Cosmopolis). She is absent or silent and semi-conscious for most of the movie, although her shining face is ubiquitous on vast posters  of her that adorn the virus-dispensing clinic.

So given David’s aversion to needles and Brandon’s prolific use of them—even drug movies don’t have as much shooting up—you have to wonder if, at least unconsciously, Brandon is trying to gross-out his father. That said, Antiviral is an austere intrigue that moves at a narcotic pace and is set in a clinical world that’s almost entirely black and white. It’s implicitly satirical, taking place within a perverse version of our own commodified celebrity culture. The narrative is almost entirely driven by one performance, by Caleb Landry Jones, as his character becomes progressively sicker with a viral disease. Biological horror is something David Cronenberg pioneered early in his career. In that sense, the Son of Cronenberg has found his vocation in a wormy apple that hasn’t fallen far from the tree. 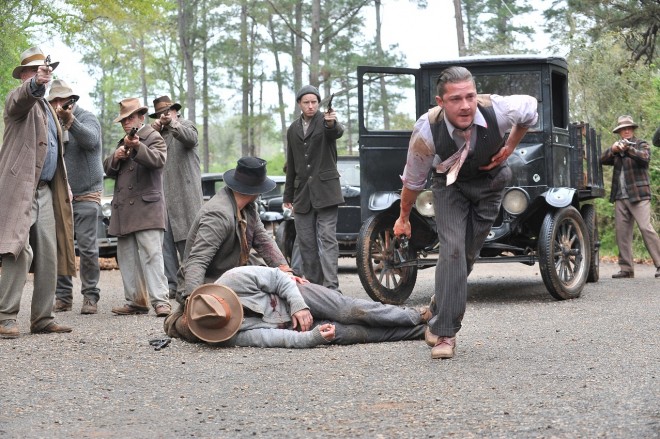 Blood flowed more liberally, a lot more liberally, in John Hillcoat’s Lawless, the movie we woke up to at 8:30 a.m. It’s a Depression-era crime drama loosely based on the true story of a legendary trio of Appalachian bootlegger brothers, led by Forrrest Bondurant (Tom Hardy). The story is about the war that erupts when they refuse to give the authorities a cut of the profits. It’s extremely violent, yet thanks to some strong character drama, it would be misleading to call it an action movie. Hillocoat (The Road) shoots in a style that recalls both Sergio Leone westerns and Bonnie and Clyde—influences that he cited in a press conference after the screening.

Discussions of gore dominated the press conference. Shia LaBeouf, who plays the most vulnerable of the three Bondurant brothers, defended the violence, saying “it’s messy, it’s dirty and it’s realistic. It’s not rehearsed like a ballet. It’s rough around the edges.” And Australian musician Nick Cave, who wrote the script and the score, co-opted any charges of gratuitous violence by embracing it with an impish honesty: expressing an affection for “classic love stories and excessive violence,” he said, “that’s what titillates me: sentimentality and brute violence. It’s over very fast but leaves a huge mess behind it.” How refreshing to hear someone unashamed to talk about titillation as a genuine pleasure.

Hardy, who powers the narrative from a Zen reserve of droll, taciturn menace, was asked about the value of Prohibition, then and now. Masked by a thicket of beard that made him look more Appalachian than his character in the film, the actor said he didn’t really want to get into a discussion of drugs. He’s already been forthcoming about his dark past as a drug addict and alcoholic.  “Whatever floats your boat,” he shrugged. “Just don’t get caught.”

It’s unusual to see an actor as candid as Hardy under the spotlight. When asked about comparisons between him and Brando, he confessed that he has never seen The Godfather, On the Waterfront, or A Streetcar Named Desire.

Far more disturbing than Antiviral or Lawless was the third film I saw today: Thomas Vinterberg’s The Hunt, starring Mads Mikkelsen as a divorced school teacher who is falsely accused by a young girl of sexually abusing her—a charge that goes viral in his close-knit community, generating what amounts to a witch hunt. Vinterberg is the Danish director who gave us the 1998 Dogme masterpiece Festen (The Celebration). This is not a work of Dogme vérité; it’s a more polished piece. But as a decent man’s life is ruined, it has the same kind of agonizing train-wreck momentum. And there’s a similar sense that, beneath Scandanavia’s progressive veneer, there’s an almost Gothic conspiracy of entrenched patriarchy that’s ready to close ranks at the slightest provocation—the same thing that we’ve seen in Steig Larsson’s Millenium triology.

There’s some blood in The Hunt, but not much. Yet the emotional violence is more devastating than anything I’ve seen so far in Cannes. This is one of the strongest films in the competition so far, along with Jacques Odiard’s Rust and Bone and Cristian Mungiu’s Beyond the Hills, And Mikkelson looks like an early front runner for Best Actor. 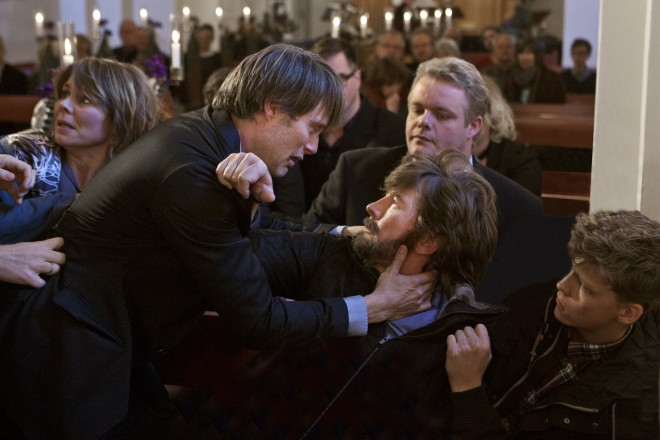 Mads Mikkelsen (left) in 'The Hunt'