With her Hot Docs award-winner, Konelīne,' Vancouver filmmaker Nettie Wild taps her family heritage as a wilderness lover who inherited a mine 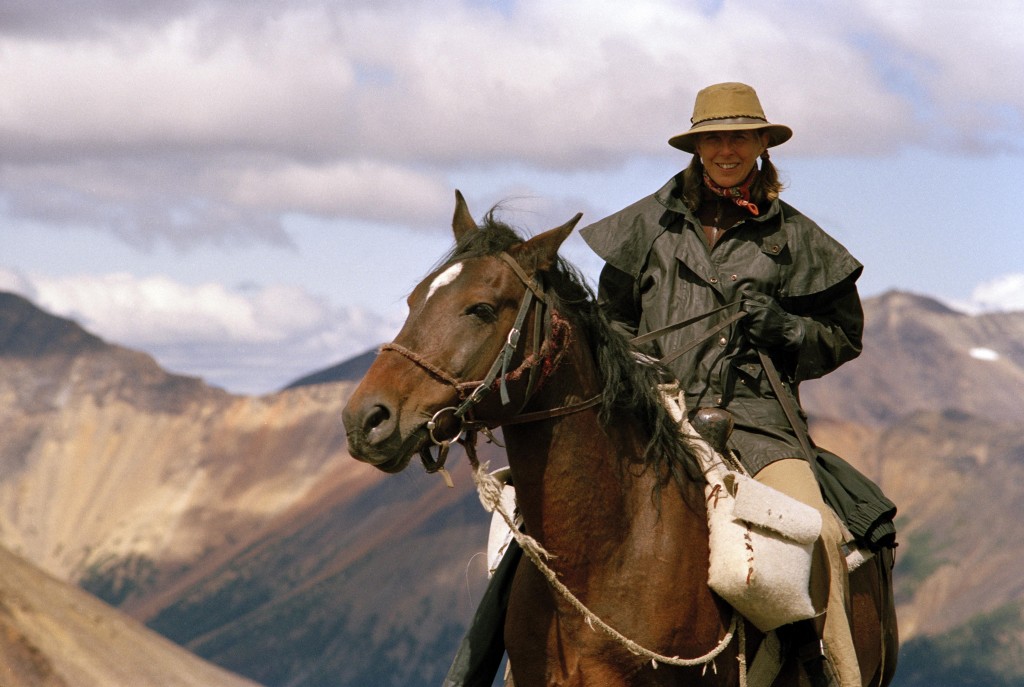 Director Nettie Wild in the mountains of B.C. / photo by Robin Lupita Bain

It’s an all-too-familiar scenario. A mining company starts tearing up pristine northern wilderness, scattering the wildlife and polluting the water, while the local Indigenous community throws up a blockade to protect its ancestral land. That, ostensibly, is the story at the core of Konelīne: our land beautiful, a documentary shot in the mountains of northwestern B.C. by Vancouver director Nettie Wild. But this exquisite film doesn’t follow the familiar template of your typical environmental doc, with a morality tale pitting noble First Nations against rapacious industrialists. Instead it rolls out an epic canvas populated with miners, hunters, diamond drillers, Indigenous elders, salmon fishermen, transmission-tower linemen, outfitter guides on horseback—each of them staking a personal claim to the land. Whether drilling holes in the rock or sewing beads on baby moccasins, they all come across as sympathetic characters with a profound affection for the wilderness. The usual white/Indigenous stereotypes simply don’t hold: a pair of white trophy hunters armed with bows and arrows camp in a teepee and stalk mountain sheep to no avail, while two Indigenous hunters in a pick-up truck casually bring down a moose with a high-powered rifle and butcher it for meat.

Konelīne, which won Best Canadian Documentary at Toronto’s Hot Docs festival, is a landmark film. It’s hard to think of another environmental documentary that has portrayed the sanctity of the wilderness and those who prey on it with such a magnanimous spirit, without muddying the issues. But then director Nettie Wild came to the film with a natural-born affinity for both the land and the miners. She had inherited a mine from her grandfather. “It wasn’t much of mine,” she told me over coffee in Toronto this week, “just seven holes in the ground”—a bunch of exploratory tunnels in the flanks of the Kootenay Rockies. Her grandfather was Wesley Prowd, a Vancouver doctor who was seduced by the stock market and became the majority shareholder in a tungsten mining operation. (Wild says he was also was the first doctor in Western Canada to treat cancer with radium, and pushed for mining the metal in Canada rather than importing it from the Belgian Congo.) 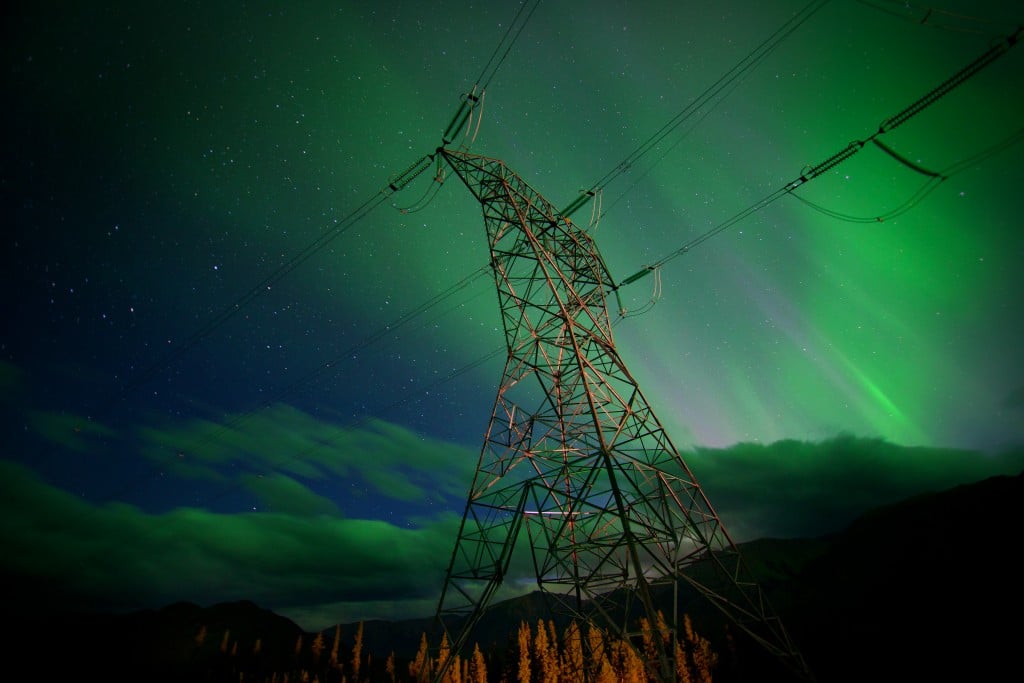 Northern lights on the North West Transmission Line / a scene from Konelīne: our land beautiful

“The only thing he loved more than fishing and being out in the bush,” says Wild, “was this idea of something that sparkled in the ground.” The 64-year-old filmmaker says she’s spent decades roaming B.C. on horseback, and attributes her love for the bush to her grandfather and her parents. Her grandfather headed up the Rocky Mountain Trail Riders Association. It was on a trail ride that her British father, Roland Wild—a foreign correspondent assigned to cover the ride—met Nettie’s mother, Barry Prowd.

After her grandfather’s death, Nettie became vice-president of the mining company—incongruous considering her pedigree as an activist filmmaker. “We’d have these totally bizarre mine meetings,” she recalls. “My documentaries were taking me to revolutions around the world, and I’d come back from Mexico or the Philippines, and the lawyer’s secretary would mistake me for the bike courier.” The mine eventually was abandoned, but she never lost her fascination with the “chase” of the mining business. In making Konelīne, she says, her “visceral understanding” of it allowed her to win the trust of at least one key player from the industry, after four others denied her access. Harvey Tremblay, owner and founder of Hy-Tech Drilling, allowed her to film one of his drill crews working at a remote gold and copper mine. But access was also tricky on other fronts. Despite Wild’s obvious sympathy with the First Nations protest against the mine at the heart of her story, at one point a Tahltan elder tried to stop her from filming when the director refused to contribute her truck to the blockade.

Wild had covered a similar conflict in an earlier documentary called Blockade (1993). But she felt the current climate of environmental politics required a less pointed approach than she’d taken 23 years ago. “I’ve become fatigued by a lot of smart people telling me it’s the end of the world. The rhetoric and dogma have become really loud.” With Konelīne, she says, “our objective was to bring a curious eye instead of a judgmental heart.” With a bare minimum of talking heads, she let the camera hunt for art in every frame, mining veins of abstract beauty rather than sharp nuggets of political narrative. Her narrative roams among half a dozen loose storylines with an associative rhythm that she likens to jazz. And whether the camera is fixed on the glass-eyed stare of a stuffed trophy animal in a lodge, or an iridescent pillow of blood draining from a freshly killed moose, she allows every image an ecumenical grace. 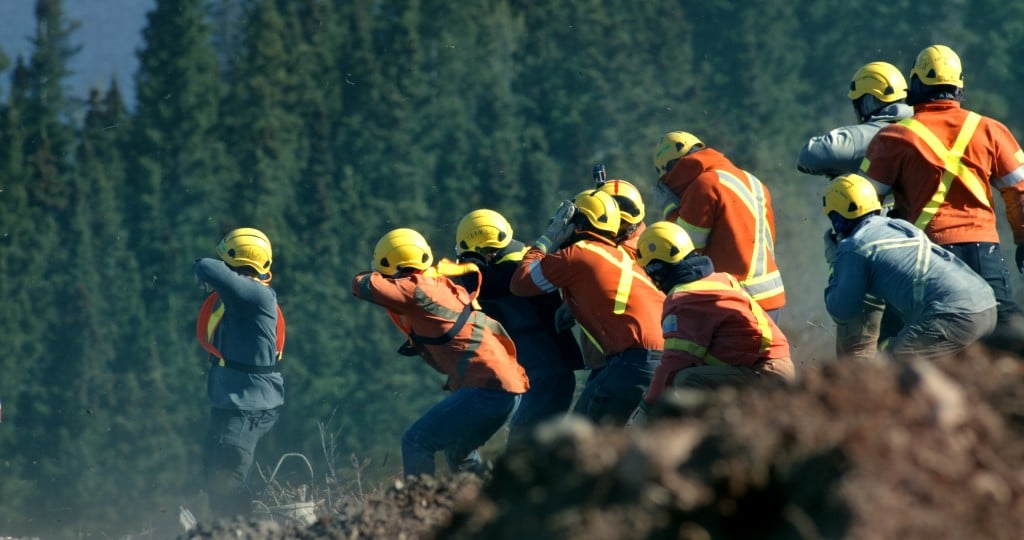 Transmission tower linemen caught in the backwash of a helicopter / a scene from Konelīne: our land beautiful

There are scenes of breathtaking spectacle, including one of horses being forced to swim the massive and turbulent Stikine River, as a motorboat churns through rapids to pull them to the far shore. But the film’s most striking visual is of the world’s biggest helicopter lowering a 16,000-lb. transmission tower into position as a crew of linemen—leaning into the gale-force backwash of the rotors—struggle to nudge the base of the tower into its slot amid a whirlwind of debris. Out of such an elemental havoc, something transcendent emerges. The effect is not unlike the apocalyptic glamour of industrial vistas framed by photographer Ed Burtynsky in Manufactured Landscapes and Watermark.

Of course, thanks to Apocalypse Now, the helicopter has evolved (or revolved) into cinema’s ultimate deus ex machina. But the iconography goes back further: Wild relishes the fact that her aerial shots of the chopper flying the tower over the mountains echo Fellini’s La Dolce Vita, with its opening scene of a helicopter dangling a statue of Christ over Rome. “Here we have the transmission line,” she says, “which for some people is the cutting edge of the forces of darkness, and for others it’s the jugular that will drive industry. We didn’t have to say one word. It’s all in the frame—dazzling engineering, sheer brawn, and the devastation of the environment. All I have to do is deliver the image and not duck any contradictions.”

The sight of an electrical conduit being planted in the wilderness to feed a mine that will cut copper and gold from the mountains needs no explanation. Nor does Wild, who more than lives up to her surname, along with one of the middle names her mother gave her—Canada. As the director explains, Nettie Barry Canada Wild was born in New York City while her father was briefly posted there. Her mother wanted to make sure her daughter would never forget where she was from. It seems to have worked: the filmmaker’s production company is called Canada Wild.