Noah: The Ark of Darkness

Russell Crowe portrays the prophet as a biblical superhero, an antediluvian dark knight 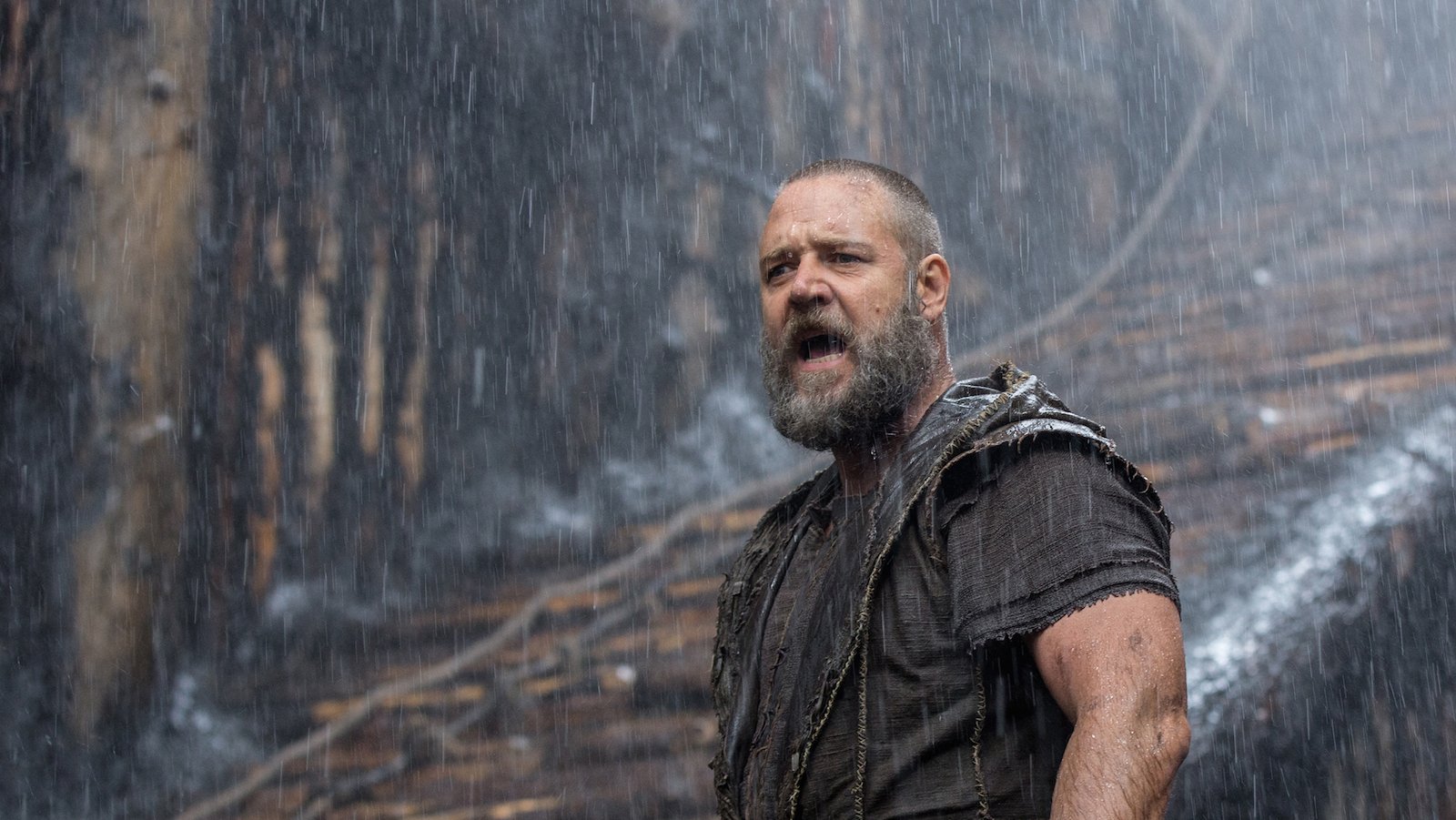 In the beginning was the Word and the Word was with Charlton Heston. He didn’t play God, but as Moses in The Ten Commandments (1956), the very first movie I saw as a child, Charlton Heston was the next best thing. God took his calls. (Or Gaawd, as Heston like to call Him—they were that close.) So it came to pass: at the age of seven, before I knew what a special effect was, I was blown away. When I watched the parting of the Red Sea in  CinemaScope, Moses, the movies, and Gaawd were an indivisible holy trinity. Hollywood had me at the first Commandment: thou shall not have any gods before me!  And for a few innocent years, Hollywood and religion could be relished as one awesome revelation, even though “awesome” wasn’t a word kids used back then. By the time I saw Heston in Ben Hur (1959), and wholesale gore was thrown into equation, I was hooked on biblical epics, and on Hollywood spectacle. But it had already reached its peak.

The genre has long since languished, and no superheroes serve as our Hollywood gods. But now in the first of a new breed of biblical epics, a prophet is remodeled as a superhero, an antediluvian dark knight. With Noah, Darren Aronofsky (The Wrestler, Black Swan) directs his first blockbuster spectacle, a $130-million gamble that shows off his cosmic predilection with a flair for melodrama, and fulfills an ambition that began with an award-winning poem he wrote about Noah’s Ark as a 13-year-old kid in Brooklyn.

Aronofsky has pumped the Old Testament’s slim narrative of the old man and the sea with a heavy-metal load of sci-fi fantasy, and forged an apocalyptic saga that owes as much to Waterworld  and The Lord of the Rings as to Genesis. Although Aronofsky preserves the core of the Genesis story, right-wing Christians looking for a literal illustration of Biblical truth will no doubt be appalled, especially when you throw in the fact that the movie is an environmentalist’s wet dream.

Played with volcanic rage by Russell Crowe, the original prophet of climate change is recast as an angry eco-warrior, a survivalist who’s out to save the animals but becomes convinced that humanity does not deserves to survive. He’s on a hellbent mission from God, and his worship of the Almighty verges on impersonation. At the beginning of the story, Noah is a noble man and a good father, a wilderness prophet who teaches his kids to respect life and not pick the defenseless flowers. But by the time his prophecy comes to pass, he has aged into a grumpy old man-god, a cruel patriarch of the last family on Earth sailing upriver in an ark of darkness. Meanwhile, Noah’s trio of sweet-faced sons and grim wife (Jennifer Connelly) become increasingly alarmed as Dad morphs from Mr. Nice Guy to Captain Bligh to King Lear.

As for the Flood, if you thought the spectacle of Noah’s ark would involve mostly water, you’d be wrong. Fire gets almost equal time. These days you can’t finance an apoco-blockbuster without a good blaze. Even Titanic needed a five-alarm fire on board to kick the narrative up a notch, as if sinking the world’s biggest ship wasn’t dramatic enough. So Hell gets as much play as Heaven as Noah fends off a zombie-like invasion of the misbegotten masses not wanted on the voyage. They are led by a vicious carnivore named Tubal-Cain (Ray Winstone), a descendant of Cain imported from another story in Genesis. And fireballs fly as he lays siege to the ark with a horde of barbarians looking for a berth.

At the heart of Floodship Enterprise, home fires burn in a big woodstove, while smoke trails whimsy from a chimney poking from the upper deck. Noah doesn’t even need matches; he’s got a sack of metallic nuggets, magic fire-starters: just give ‘em a crack and shazaam! . . . you’ve got an instant blaze. Even the rain doesn’t just fall from the sky. Water erupts from the ground in a Vegas display of vaulting geysers. In Aronofky’s Doomsday scenario, the sky is falling every which way.

This neo-Noah is a biblical superhero with God on his side, plus a Praetorian Guard of giant rock monsters who have  his back—the Bible’s fallen angels are re-imagined as geological Transformers glinting with magma, who lay waste the barbarian invaders with six whirling limbs. These rock creatures could have been forged in Middle Earth. Noah‘s Old Testament wrath may be written on Crowe’s brow, but its OS is ripped from the Gospel According to Tolkien, a fantasy world in which rocks make faces and crush the rabble. Who needs religion when you’ve got pyrotechnics?

Above the fray, holed up on a mountainside, is Noah’s ancient grandpa, Methuselah, played by Anthony Hopkins as a wizened trickster, ornery and  half-blind, expecting someone to bring him berries. He loves them berries even more than that Sling Blade guy loved them French fried potaters. With his usual bag of tricks, Hopkins dishes up an amusing performance, as Aronofsky makes one of a rare concession to humour in his unrelenting drama

I know I’m making Noah sound ridiculous, which it is. And I could go on to quibble about the model-like complexions and perfect teeth of Noah’s nuclear family. But frankly, once I got over the absurd novelty of the  rock monsters, and the notion of Noah as a kind of deranged cult leader, I just gave up and gave into it. There was still  plenty to enjoy in the action and the spectacle. The film is charged with passion and commitment. The performances are vibrant. Aranofsky has an eye, to say the least, and the vistas of Iceland (where would the apocalypse be without Iceland?) are breathtaking. As a blockbuster, the movie delivers the goods. But as a biblical epic, its suspension of disbelief is a bridge too far. I can’t see Noah reaffirming anyone’s faith, or making a believer out of infidel. Even if you’ve stopped believing in Him, something’s amiss when God is missing in action.