In conversation with Brian D. Johnson 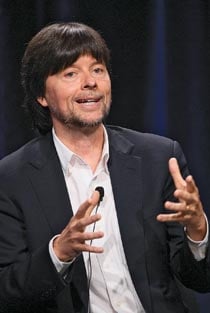 Ken Burns, 59, has been chronicling America’s history on film for three decades. Weaving archival photographs and footage with oral history, he has directed and produced documentaries on epic subjects for PBS—notably The Civil War, Baseball and Jazz. His latest opus is The Dust Bowl, a four-hour film to be released on DVD following its two-night PBS premiere Nov. 18 and 19. It documents the worst man-made ecological catastrophe in American history. It was caused by the “Great Plow-up,” an industrial wheat-farming boom that tore up the arid grasslands of the Great Plains. Turned to dust by drought, millions of acres of America’s breadbasket blew away in killer storms during the 1930s, forcing hundreds of thousands of people from their homes. Burns’s film mixes images of horrific devastation with interviews with elderly Americans who were children during the Dust Bowl. They tell of “black blizzards” that charged over the horizon like moving mountain ranges. The dust storms buried barns, suffocated animals and children, and caused fatal “dust pneumonia.”

Q. You appeared on Letterman in Manhattan just after Sandy hit. What was that like?

A: There was no audience. It was sort of Antonin Artaud and Theatre of the Absurd and, of course, that fits right in with who Dave is. We were talking about people dying from water—and about a film about people dying to get water.

Q: I watched your film during hurricane Sandy, which was strange, to say the least. Just like Sandy, the Dust Bowl’s most extreme storm was cranked up by the collision of a tropical disturbance with a cold front from Canada, on April 14, 1935.

Q: Your film doesn’t spell out the link to current climate change. But you can’t watch it without thinking, “If this can happen when you plow up a few million acres of the Earth, what happens when you fill the atmosphere with greenhouse gases?”

A: What will happen is what just happened in New York and New Jersey. You have more extremes of weather and bigger events. I live in hilly New Hampshire; we had a tornado here last year in my town. A tornado. We don’t get tornadoes in New Hampshire.

Q: I thought I knew about the Dust Bowl, but until I saw your film, I had no idea it had scarred America for so long on such a vast scale.

A: We have those conventional wisdoms: a few storms, a Dorothea Lange photograph and The Grapes of Wrath. Then you realize it’s a much more complicated, man-made environmental disaster. And you can bore down—as we were able to do—with the last survivors, those 26 or so people in their late 80s and 90s who were all children or teenagers. It was a catastrophe of almost Biblical proportions—10 years and hundreds of storms—killing not only crops and cattle but children. Nature was so out of whack; you also had plagues of jackrabbits and locusts. People had the feeling this was the end of the world.

Q: When we talk climate change, some claim it is not man-made. But the Dust Bowl was.

A: We can see the way a man-created environmental disaster prefigures things we’re dealing with. Whether it’s sea walls being breached in Lower Manhattan or the absence of moisture in the Dust Bowl, we run the risk of repeating ourselves.

Q: Plowing up millions of arid acres now seems stupid, but they didn’t know that, right?

A: I think people did. The old ranchers were saying, “Wrong side up.” The Indians knew it was not right, that these buffalo grasses send their roots five feet down to suck the moisture but also hold the topsoil evolved over thousands of years. All of a sudden we were turning over that grass in an area larger than Ohio, and this was a marginal area anyway. This was the worst man-made ecological disaster in American history so far.

Q: What would be the runner-up?

A: I’m not sure. Maybe the Exxon Valdez or BP. We know the oceans in many places are on the verge of collapse. We understand what global warming and climate change are doing to agriculture. Things are turning into desert.

Q: FDR’s government bailout was almost as epic as the Dust Bowl itself—bigger than Obama bailing out the auto industry.

A: Government—which is out of fashion these days in the United States—was the only mitigating factor during the Depression. They provided surplus commodities so people could eat, gave them jobs through the Works Progress Administration program, and left a legacy of roads, bridges and airports. They paid farmers to cull their worthless cattle, to not plant, to do contour ploughing, to rotate crops. They planted nearly a billion trees.

Q: Was the Dust Bowl healed?

A: Eventually we learned how we might put a million straws down into the vast Ogallala Aquifer that runs from the Sandhills of Nebraska to central Texas and suck up that water. This is not sustainable water. This is mining ancient glacial melt. When it’s gone it’s gone, and the questions of the Dust Bowl reassert themselves. In so many films that I’ve done, short-sightedness is one of the major human themes. We live for the moment. No one’s willing to do the necessary rolling up the sleeves until the catastrophe happens.

A: Obama visits one of his biggest critics, [New Jersey Gov.] Chris Christie [after Sandy], and turns him around because the government is the only agency that’s going to have any real muscle to clean this thing up, and you had a presidential candidate who wanted to privatize FEMA [the Federal Emergency Management Agency], or cut its budget back. I had criticized Romney in an editorial because he wants to get rid of PBS—which is one-100th of one per cent of the federal budget—by saying that he might know the cost of things but he doesn’t know their value.

Q: In an era of hip, zippy documentaries, your films value the slow, traditional approach.

A: When people complain, as they did in the ’80s, that nobody’s going to watch something 12 hours long on the Civil War, because we’re in this MTV-cutting generation, it’s still the highest-rated program in public television. Then they said the same thing using the YouTube model of eroded attention. When The Civil War came out, there were 20 channels, and now there are 500. We’re still getting 35 to 36 million people watching these big series.

Q: What else is in the works?

A: Well, The Central Park Five will be broadcast in April on PBS. We just finished this massive series for 2014 on Theodore, Franklin and Eleanor Roosevelt—seven parts, 14 hours. We are shooting a two-part biography of Jackie Robinson, the first African-American to play in the modern era of the major leagues. We’re shooting a 14-hour series on the history of the Vietnam War. We’re writing and researching a series on country music, and a biography of Ernest Hemingway.

A: That’s the DNA for everything I’ve done for the last 35 years. That attempt to look at a still photograph and see time. To hear movement and sound, then search for a close-up, a tilt, a pan, a reveal. To create what the auteurs call mise en scène. I wanted to be one of those auteurs when I was growing up and abandoned it for the sheer power of fact.

Q: Cinema was your first love?

A: I wanted to be a filmmaker since I was 12. My mother died when I was 11. My father would take me out to a nine o’clock show, and that was late on a school night, and I watched my dad cry for the first time. I understood instantly what the power [of film] was. I wanted to be John Ford, Alfred Hitchcock, Howard Hawks, Orson Welles. I wanted to be the French new wave. I ended up going to Hampshire College in ’71, where all of my teachers were social documentary still photographers. I just signed up in that army. It had to do with being rooted in still photographs, trying to wake the dead—maybe that’s back to my mother—trying to find a way I could look at a still photograph of building the Brooklyn Bridge and hear the workers hammering, the seagulls in the East River, the steam compressors hauling up big blocks of stone. You take an old photograph and you realize it has a past, it has a future. So what would it mean to go inside it?

Q: Now every Apple computer has an automatic “Ken Burns effect” for photos. Are you more famous for that than for your films?

A: It’s funny, you do run across kids who say, “Oh, you’re the Ken Burns effect!” But now the films are so ubiquitous in schools they’ve all had to watch, at some point, Civil War or Lewis and Clark or Baseball or Jazz or something. Steve Jobs called me 10 years ago next month and asked me to come out and visit him. He brought me into a room with a couple of classic technical guys. They’d perfected this thing which had, as the working title, Ken Burns effect. He said, “We’d like to keep the name.” I said, “You know I don’t do commercial endorsements,” and he was so crestfallen I said, “Look, why don’t we work out a deal where you give me equipment and I’ll give it to non-profits?” We became friends. But this primitive panning and zooming through still photographs has rescued millions of bar mitzvahs and weddings and birthday parties.