It’s the battle of the Canucks. I’m not talking about Vancouver’s ill-fated hockey team, but about Ryan Reynolds and Jim Carrey, two Hollywood Canadians butting heads at the box office this weekend as stars of studio blockbusters: Green Lantern and Mr. Popper’s Penguins, respectively. Both give charming performances in ridiculous movies. Just in time for Father’s Day, both Reynolds and Carrey play heroes whose destiny is cast by the legacy of a dead dad. Neither movie is as bad as I expected it would be from the trailer. But I can’t heartily recommend either of them—unless you’re too young to be reading this, in which case the pooping penguins might strike you as the funniest thing you’ve ever seen. If you’re a grown-up, however, and don’t feel a need to escape into a computer-generated fantasy world, there’s a superb and mature alternative—Beginners, which also happens to explore father-son issues and feature a Canadian, Christopher Plummer. (Unlike the two blockbusters, it opens in Toronto only this week, with Montreal and Vancouver to follow June 24.)

Wednesday night’s preview of Green Lantern overlapped with the first period of the Stanley Cup’s Game 7. Having seen the trailer, which looked abysmal, I swore to myself that if the movie clearly sucked after an hour, I would bolt to watch the game—rationalizing that Ryan Reynolds, its Vancouver-born star, would probably do the same. But I ended up staying for the whole damn thing, which doesn’t mean that the film was so good that I couldn’t tear myself away. On the contrary, it was more like not being able tear myself away from a train wreck—a movie so exotically misconceived that it became strangely fascinating. I had to see how the carnage would play out. And I felt for the film, which seemed almost sheepishly aware of its own shortcomings.

Next to Superman and Batman,  Green Lantern is the also-ran geek of DC Comics superheroes. He has the dorkiest costume and the daffiest superpowers. (His thing is that he visualizes his weapons, from chain saws to racing cars, which are all materialized in the same uncool shade of emerald green). First we had the misbegotten Green Hornet, starring Vancouver’s Seth Rogen, and now Green Lantern. Let this be a lesson to Canada’s Hollywood emigres. Not a good shade for a superhero. What can you expect? It’s the colour of kryptonite.

Green Lantern is a comic book tale with a cosmic philosophy so baroque it rivals Scientology’s, and it requires scads of lofty exposition. I’ll spare you the details. Let’s just say it’s an origins saga, the story of how a Top Gun hero is chosen to be a soldier in an intergalactic war between good and evil. A good chunk of the movie is a space opera, taking place on another planet, as Hal, a cocky test pilot, receives his marching orders from an advanced civilization of purple aliens. He is “chosen” by a ring, which has to be charged by a lantern—inheriting both devices from a dying alien who crash-lands on Earth. Unlike Superman and Batman, Green Lantern is not just a crime fighter. He’s an earthling  drafted into a deep space squad of peacekeepers fighting Parallax, a demonic force threatening to consume the entire universe. The good guys harness the green force of willpower, which they say is the strongest thing in the universe, while Parallax channels the yellow force of fear. (Parallax is a billowing, snaky thundercloud with teeth, the sort of insatiable gargoyle who would feel right at home home in Harry Potter, The Lord of the Rings. . .  or Ghostbusters).

This motherlode of Wagnerian doom all comes to rest on the gym-toned shoulders of Mr. Nice Guy—Ryan Reynolds, an actor who’s trying to prove himself as a A-list superhero by playing a character who’s trying to prove himself as . . . a superhero. The meta synergy of it all produces some amusing interludes of camp comedy. At one point Ryan’s character, a virtual Canadian, says, “I’m uncomfortable with the word hero.” No kidding. There are also a few jokes about the mask, which doesn’t fool his girlfriend (Blake Lively) for a second. And when Green Lantern hovers outside her window like a Tinker Belle Romeo, it’s too silly for words. But despite the ironic touches of self-deprecating charm, much of the movie is dead earnest, and laughable. The effects are shabby and unconvincing, especially in the space scenes, which feature a Star Wars menagerie of kitschy aliens against painted planetary backdrops that are strangely flat for a big-budget 3D extravaganza. Then there’s the father-son theme, which is pure cliche, as Hal is haunted by the legacy of his dead test-pilot dad, who flew himself into the ground, literally.

The major highlight is a twisted performance by Peter Sarsgaard as Hector, the villainous scientist who becomes grossly infected with the Dark Force. Also, Reynolds is consistently likable. If the movie crashes and burns, he should not take the rap. It’s as if he got kidnapped on his way to the set of a romantic comedy, and dropped some bad acid at the Skywalker ranch. Oh, and the director? Martin Campbell. The same Martin Campbell who made Casino Royale. Hard to believe. Apparently the next sequel is already in the works. Good luck with that. 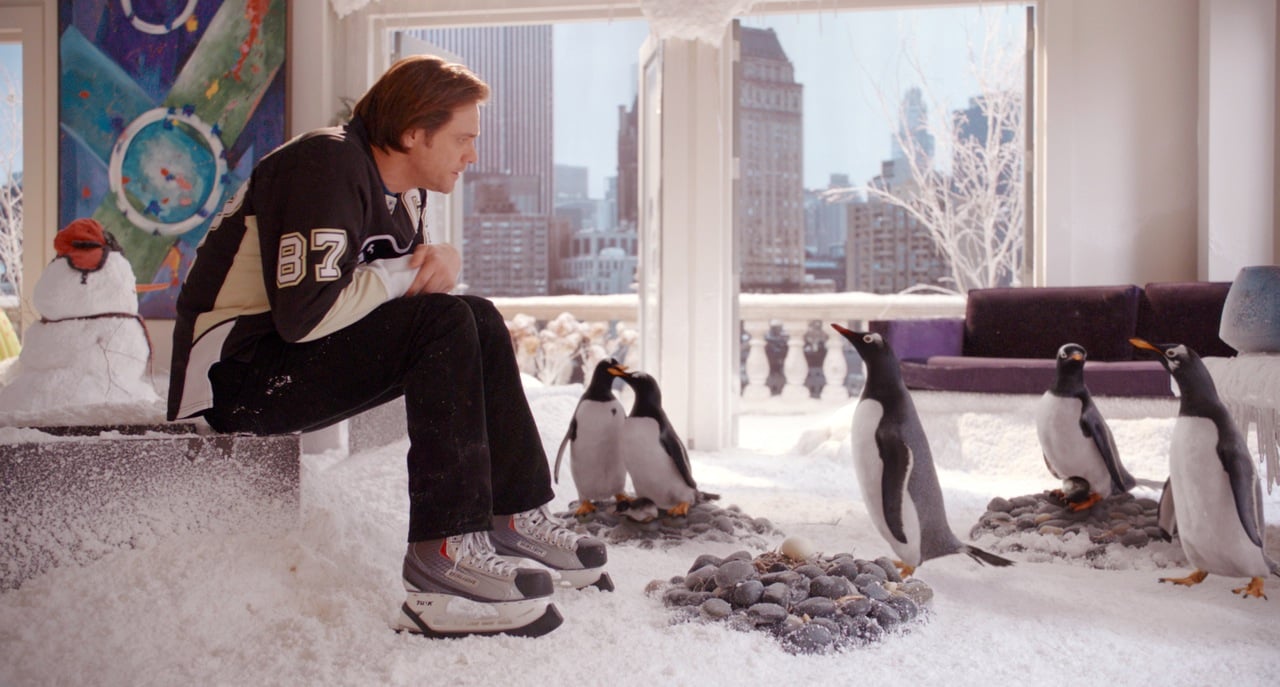 Unlike Green Lantern, Jim Carrey’s latest vehicle is aimed at real kids, not overgrown ones. And it’s a far more confident, coherent and smoothly entertaining piece of work. You have a virtuoso comic acting with children and animals—and the animals, all characters in their own right, are a Seven Dwarves troupe of real live penguins with computer-generated stunt doubles who can dance, mug, gesticulate and do pratfalls. The movie’s smug message, however, is so toxic it doesn’t bear thinking about. Aside from promoting the notion that wild animals would be better off in a Manhattan penthouse than in a zoo (the zookeeper is the villain), it suggests that if your dad turns his penthouse into a penguin playpen, he’ll be transformed from mean businessman to fun-loving father and presto, your separated parents love each other and get back together! This movie comes from 20th Century Fox, but its slick mix of real live cartoon animals and utopian family values outdoes Disney.

The retro message may something to do with the fact that the movie has re-purposed a beloved 1939 children’s book by husband and wife authors Richard and Florence Atwater. The screenwriters updated the story to the present day, turning Popper from a house-painter to a real estate shark, whose specialty is sweet-talking Manhattan property owners into selling their land so his company can erect monstrous buildings. Popper’s latest challenge is to buy the Village on the Green in Central Park from a little old lady so he can raze it to the ground. His career path gets derailed when he receives two crate-loads of penguins from his deceased father, an adventurer who was absent for most of his childhood. Popper is frustrated at first, but his conversion from cold-hearted businessman to animal loving father doesn’t take long. The weird thing is (spoiler alert) that Popper ends up saving and gloriously renovating the Tavern on the Green’s fabled restaurant, where he used to lunch with his dad— the real Tavern on the Green has been shut down for two years.

Whatever you think of the movie, it’s hard to dislike Carrey’s infectious performance. He has great fun with the material, working the corners of the formula and pulling out bits of improv genius, like rabbits from a hat. And there’s a delightful set piece of the penguins sliding around the spiral floors of the Guggenheim, causing mayhem at a black tie benefit. And I’m no expert on small children, but chances are this is a ride they’ll enjoy, even if the movie could be retitled Liar 2 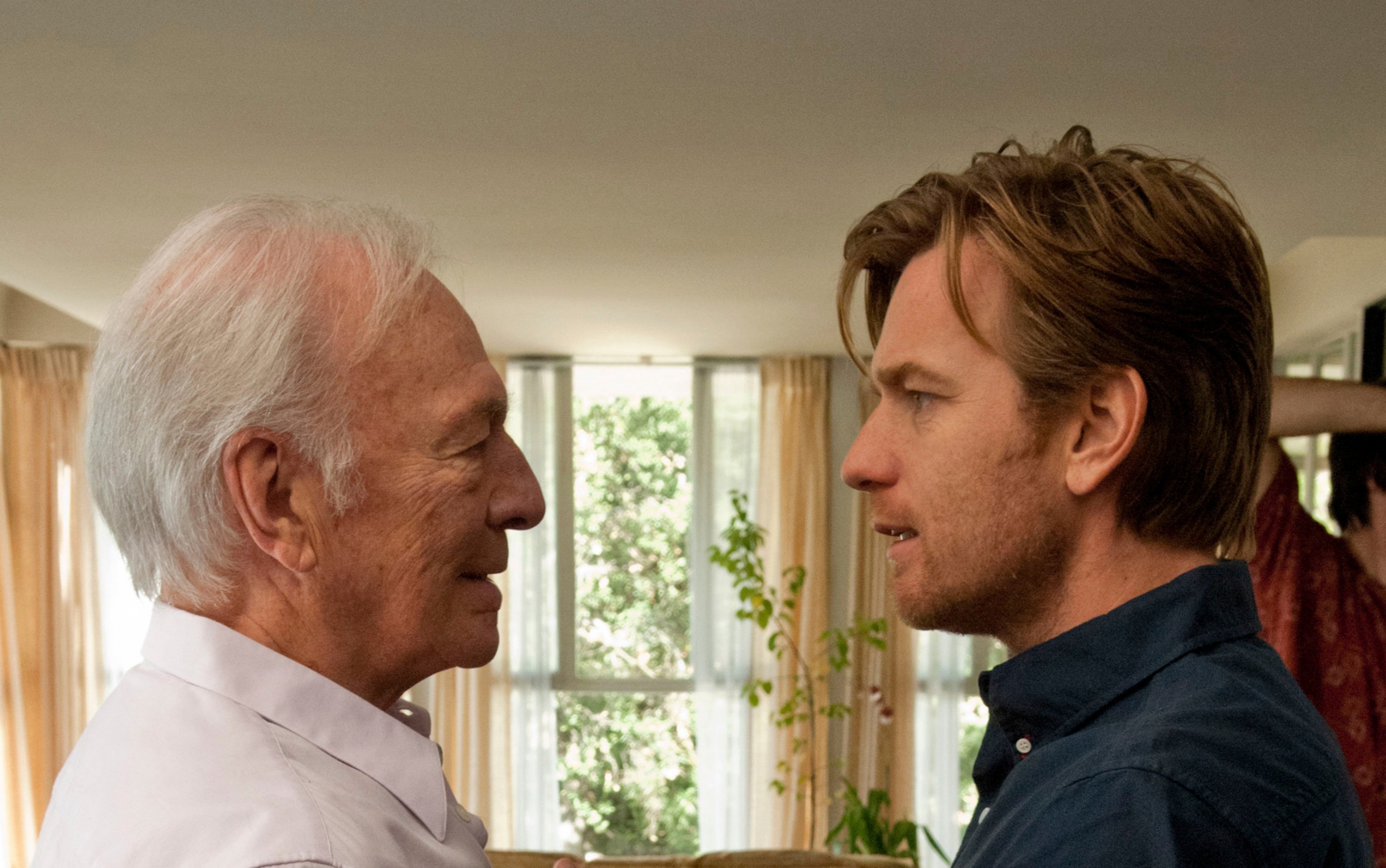 This movie is so far removed from the cartoon world of the previous two that it’s hard to believe they belong to the same medium. Written and directed by American filmmaker Mike Mills (Thumbsucker), Beginners has the unmistakable veracity of a personal memoir. That’s because it’s based on the director’s own story, as the son of a gay man who came out of the closet at the age of 75, after his wife’s death ended a 45-year marriage. Oliver (Ewan McGregor) is a graphic designer who inherits a Jack Russell terrier and a truckload of unresolved issues after his father, Hal, (Christopher Plummer) dies of cancer.  The narrative toggles between the flashbacks to his  his father’s joyful coming-out (which is overshadowed by his terminal cancer diagnosis) and the present, as Hal copes with the aftermath of the death while tumbing into an affair with lovely French actress (Melanie Laurent).

So this is not just a movie about dealing with your dad being gay; it’s about mourning and cancer, fatherhood and marriage, romance and death.  The disjointed flashback rhythm feels awkward at first, but it finds its feet. There’s a layered life-is-like-that complexity to the film. There’s a idiosyncratic precision to the minor characters, from the goofy young boyfriend Hal found on the Internet to Oliver’s iconoclastic mother, glimpsed in flashback to his childhood. The story finds time to explore the frustration of Oliver’s career, as he sketches a string of cartoons in his attempt to create an album cover for a band called The Sads—a cumulative essay on ennui that’s way more art than the client had bargained for. And the sketches evolve like a film-within-a-film—one drawn by the director, who is also a graphic designer with a number of album covers to his credit.

Novelist E.M. Forester famously wrote “only connect.” Beginners is a movie about the failure to connect, a story that explores the wide-open spaces of melancholy, appropriately set the open-ended universe of Los Angeles. Even the Oliver’s whimsical romance with a gorgeous French actress who lives in a hotel (Mélanie Laurent) feels disconnected. But while the film is based on memoir, it never sinks into a quagmire of first-person sentiment. Mills is an urbane, stylish director, and he paces the story with graphic montages of deadpan documentary, contextualizing the flashbacks with facts about politics, fashion, and sexual mores.

As Oliver, a quietly creative soul trying to make sense of his family and himself, Ewan McGregor has never been better. Much of his quest, and the filmmaker’s, is a struggle accept his father’s eleventh-hour embrace of sexual self-expression. Plummer effortlessly slips into the role of a gay elder indulging in reverse Peter Pan complex—joyfully diving into gay culture while denying his impending death. If anything the film’s portrayal of Hal is a tad too romantic. This is clearly a film about the emotional journey undertaken by the son, grappling with his father’s life and death at the same time. But there’s a unspoken strain of parental neglect. Flashbacks to Hal’s mother reveal a bohemian who refused to give int to the maternal role.  And you can’t help feeling that Hal, in his aging flight to sexual freedom, has abandoned his role as a father—even if his son would never accuse him of it.

I know this doesn’t sound like much fun. But Beginners is witty, endearing and oddly uplifting. It deals death and cancer but it’s not a tearjerker or a tragedy. It’s a bittersweet tour de force that splits the distance between comedy and drama, reminding us that sadness can be as luxurious an escape as any.