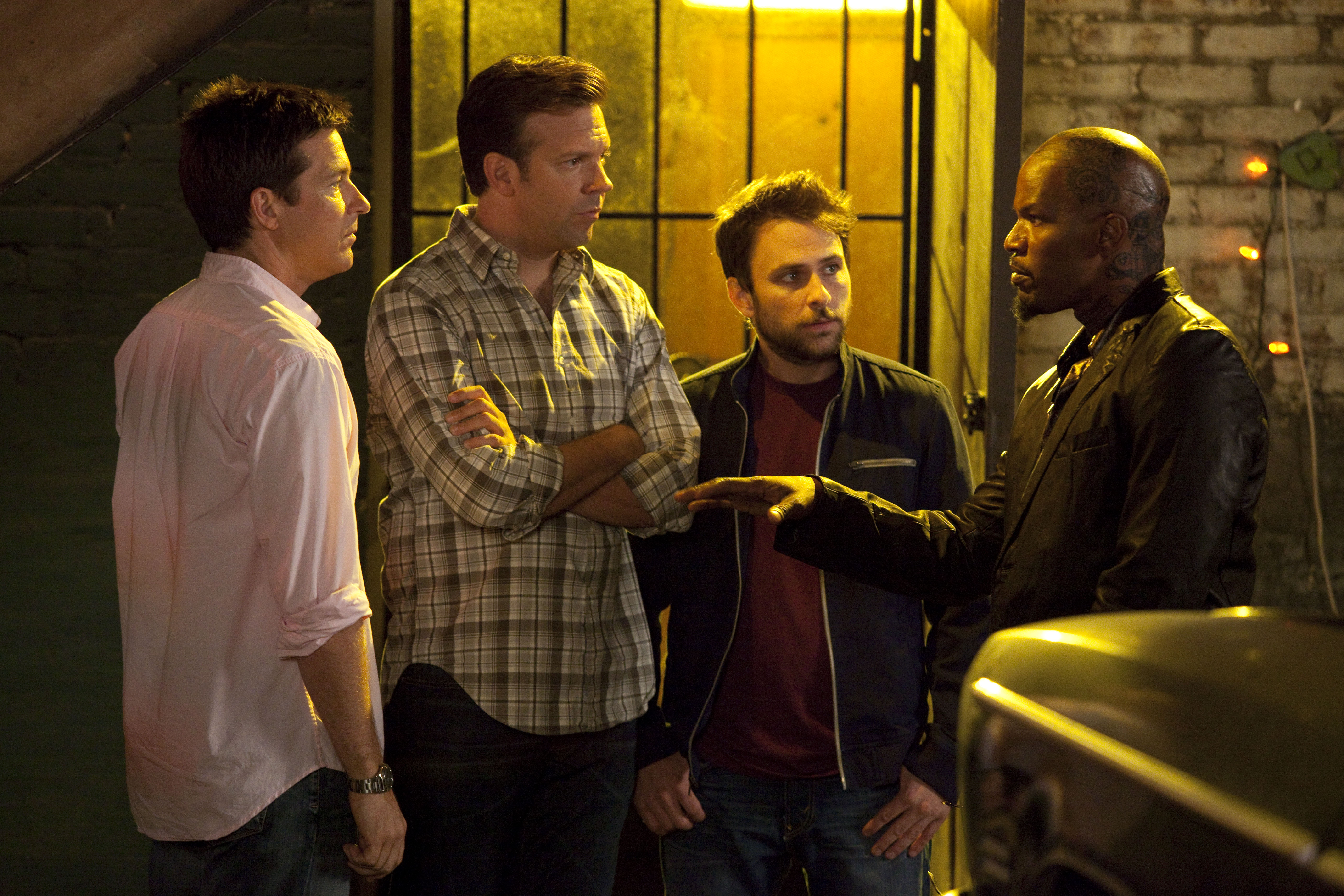 Horrible Bosses requires some getting used to. After the first few scenes, you come to accept that nothing onscreen will be believable. Not one plot twist, not one joke, not one line of dialogue. You settle into the fact that you’re watching a farce. There are quite a few laughs, some clever bits of dialogue, and some fine acting. But despite the highly credible performances, the jokes all sound written. Sure, they made me laugh, but it was the kind of laughter that got dragged out of me, with some resistance. The movie is less than the sum of its gags. Which is too bad, because I wanted to like it more. The three male leads—Jason Bateman, Jason Sudeikis and Charlie Day—are all good actors you’re happy to spend time with. The ensemble has a Hangover vibe, without the charisma of a Bradley Cooper. All three men are character actors, each playing a different breed of the Likable Loser. They’re the Three Stooges 2.0, a trio of emasculated idiots who spend the movie trying to grow a pair. These three buddies who have all have bosses from hell—a corporate psychopath (Kevin Spacey) who takes sadistic pleasure in treating his top employee like a slave, a coked-out sleazeball (Colin Farrell) who’s driving his father’s firm into the ground, and a foul-mouthed dentist (Jennifer Aniston) who’s sexually harassing her male hygienist. Commiserating, the three drinking buddies conspire to murder their respective tormenters. They use GPS to locate a rough bar where they hope to recruit a hit man. Instead they get a “a murder consultant” played by Jamie Foxx. He suggests they kill each others’ employers, as in Strangers on a Train, and a plot is born. 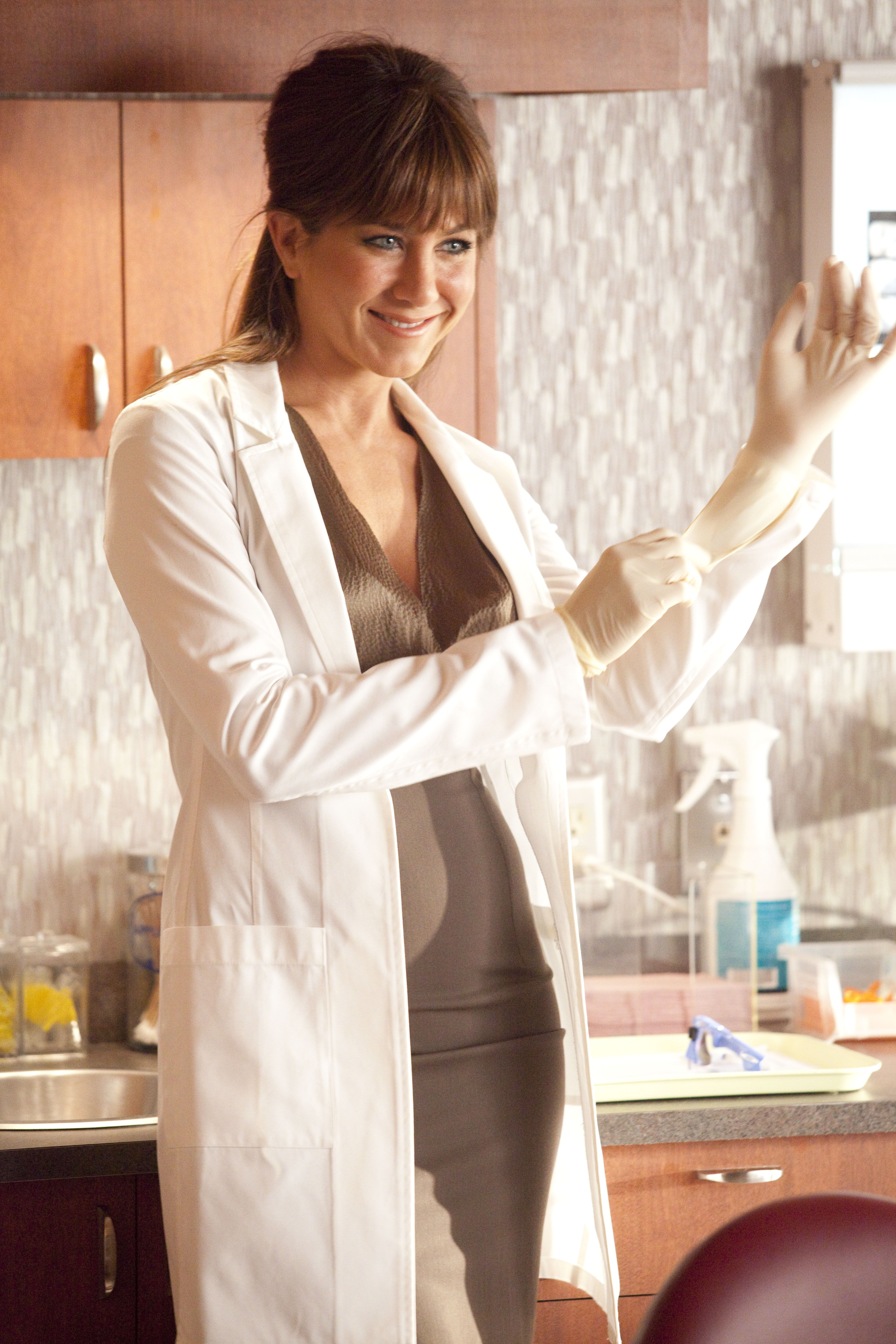 Much of the dialogue is used for comic shock effect, occasionally with profanity blasted across the screen, Godard-like, in giant upper-case type. Titillation is the main event here, especially with Aniston’s role. In a shameless bit of stunt casting, she’s cast as a dominatrix dentist who talks super-dirty, doing the verbal equivalent of a pole dance. While her patient lies in the chair anesthetized, she takes sexual harassment to absurd heights—getting almost naked, while throwing herself at her meek, woefully whipped hygienist, who’s trying to be true to his fiancee. Played by Charlie Day, he’s the best thing in the movie: he dials the pitch of his voice up to a chipmunk squeak according to how deeply he feels threatened. His buddies, of course, can’t understand why he would object to being sexually harassed by a hot dentist. That’s an amusing running gag. So is the scene where the boys debate which one of them would be more rape-worthy if they end up prison.

The movie’s weak link is Aniston’s showgirl intimations of sexual assault. She’s coy and unconvincing. You can’t help feeling that casting her as a selfish, cold-blooded marriage wrecker is just another image makeover for the woman who has never recovered from Angelina Jolie. And the high-five vitriol that greets her inevitable defeat, branding her as a crazy-bitch-whore, is more off-putting than knee-slapping. The three guys are more likable as losers, not winners. But by then the story has collapsed, as if the script has simply lost interest in the intricate promise of its premise.

So is Horrible Bosses a horrible movie? No. More like a passable crowd-pleaser But these things are relative. Let’s just say it’s not as good as Hangover, but less horrible than Hangover 2.

Meanwhile, there are a bunch of documentaries in limited release that are worth catching. If you’re a 3D skeptic, you owe to yourself to see Werner Herzog’s Cave of Forgotten Dreams, which takes 3D cameras into the most ancient art gallery on Earth—the Chauvet cave in the south of France, which contains hundreds of paintings that date back some 30,000 years and were kept in pristine shape after a rock fall sealed off the cave for 20,000 years. Access to the public is restricted because human breath and sweat create mold that can damage the fragile charcoal images. But Herzog gained privileged access, and what he shows, coupled with his trademark philosophical musing, is enchanting. This is a case where 3D actually makes sense. In sketching animals on the walls, the artists embodied the contours of the rock into their forms. What’s astounding is how modern, almost Picasso-like, some of the drawing seems. As Herzog notes, the gestural touches make the figures seems virtually animated, as if these prehistoric artists were creating a prehistoric form of cinema. Herzog has an ongoing fascination with madmen and animals. In this case, the animals are on the cave walls. But before the movie is over, he manages to locate some wild albino crocodiles just down the valley.

Two other new documentaries are Page One: Inside the New York Times, and Conan O’Brien Can’t Stop. I felt the Conan doc entertaining but thin. I adored Page One, and found it fascinating. But as a journalism junkie, perhaps I’m not the best judge. To read my piece about both documentaries in the current magazine, go to: Conan and the Grey Lady fight for their lives