Hollywood struggles with its social conscience, lending interest to another overlong evening 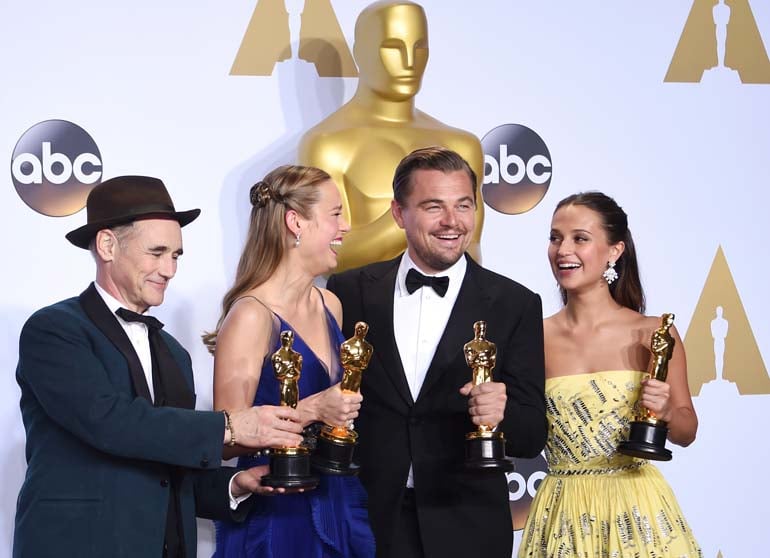 Many, many, many people have drawn the comparison between the atmosphere surrounding this year’s Academy Awards show and the show of 1968, covered memorably in Mark Harris’s book Pictures at a Revolution. Nothing is ever exactly the same, and the tension around the 1968 awards was undoubtedly greater; the show was postponed by a week because of the assassination of Martin Luther King Jr., but the Academy only accepted the postponement because many performers threatened to boycott the ceremony. On the other hand, the fact that this presidential primary is dominated by a media star—someone whose campaign would have gotten nowhere without all the support he received from the mainstream entertainment industry—highlights a sense of guilt that Hollywood didn’t have in 1968. At least back then they could reassure themselves that they weren’t actively making things worse; a subtext underlying this ceremony is that maybe some of this is their own fault.

The host of the 1968 show, Bob Hope, responded to the social and political issues of the time by pretty much ignoring them. Chris Rock probably didn’t think that option was available to him, even if he’d wanted to take it. But he didn’t seem very comfortable in his role of bridge-builder, the man whose job it was to explain the problem. He had some good lines, but it was hard for any of them to have any real bite.

Still, Rock made the most of his uncomfortable position, starting out seemingly awkward—repeating himself a lot, laughing nervously—and gradually getting more confident in working the room. Given how experienced he is, this may have been a deliberate choice for how to develop the monologue. The evening was pervaded by Hollywood’s uncertainty about what exactly its trouble is, or how much they can talk about it without preaching; it created a tension that was interesting. You couldn’t use that word for the moments that did not deal directly with the issue, like the opening montage, a bunch of random clips from the big movies of 2015, which only seemed to say that the movie industry consists of nothing but Star Wars and movies that want to be Star Wars.

And so I’m faced with a slight problem: everyone’s going to be talking about Rock’s performance and the issues it involved, which means I want to find something else to talk about. But this is the Oscars. Take out the controversies, and they’re pretty much the same every year.

Oh, every Oscar show does bring with it a slightly different theory of what’s wrong with it. This time around it seemed like the issue was a specific kind of insularity: the writers’ belief that things are universally known when they’re really only familiar to people who read web sites or watch cable news. So in one segment, Rock introduced black conservative Stacey Dash as the new “director of minority outreach,” a reference to her denunciations of Black History Month. The audience reaction seemed to be, as Dash herself put it: “Who is Stacey Dash and why did she just walk across the #Oscar stage?”

And then a couple of minutes later, Sarah Silverman made a joke about James Bond not being “street enough,” an oblique reference to a writer who said Idris Elba was “too street” to play Bond. Only how many people even followed that particular controversy, let alone remembered it? There seems to be a certain disconnect between writers and their audience, an assumption that everyone has seen the same memes they have. If you get the joke, you’re grateful that the writers didn’t dumb it down for the global audience by explaining it. If you get the joke. You do have to wonder how much of the evening was even intelligible to a lot of viewers, given how many jokes were based on the assumption that we all knew about the controversies involved.

The main problem with the Oscars as an entertainment show is, in a different sense, structural: there’s always a huge sag in the middle section while we wait for the big awards to come back. At least this time around there was some interest provided by the way Mad Max seemed to be sweeping many of those awards. (I fully support any movie that is not a period costume drama winning for costumes and set design.) But the show seems designed on the assumption that people will check out early and come back late at night when the “real” awards come back. Short of spacing out the awards more randomly—which the advertisers presumably don’t want—there is very little the host or the presenters can do to make the middle section of the show appear essential. Particularly in an era of big franchises, when there are few major movie stars they can throw at the middle segments.

And so there wasn’t much to do during the evening except identify wins that looked like lifetime achievement awards—like composer Ennio Morricone and Growing Pains alumnus Leonardo DiCaprio—and to root for Mad Max to get some of the bigger awards. But of course it didn’t. One of the few other direct parallels with 1968 is that Spotlight is sort of the In the Heat of the Night of 2016: a good, well-made, well-regarded movie on an important topic, the sort of thing Hollywood can congratulate itself on. The Best Picture award usually indicates that Hollywood thinks well of itself, even in years when it has every reason not to.

Which is a way of saying that Hollywood’s self-questioning is almost certainly not sincere; Rock was practically the only person out there trying to tell them that they’re not better people than the rest of us, but it’s doubtful many of them went home thinking anything of the kind. But we should probably still be grateful for it: it gave a theme to an evening that doesn’t have a lot else going for it.