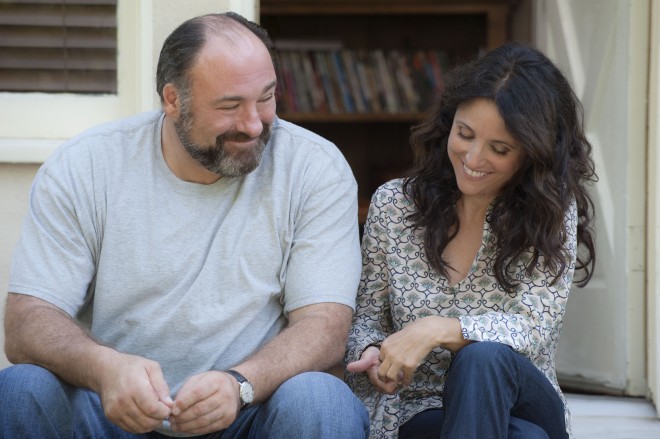 Opening this weekend are a two classic his-and-her options. With Rush, Ron Howard unrolls a classic mano-a-mano duel based on the true story of Formula One race car drivers James Hunt and Niki Lauda. And with Enough Said, Nicole Holofcener delivers a smart, sensitive romantic comedy that unfolds from a female point of view. Which is not to say that Rush is just a testosterone-fueled guy flick and Enough Said is a chick flick. If anything, Holofcener’s film is the more equal-opportunity entertainment, a romance that’s unusually generous to both it female and male leads. But both are rich diversions that rise above their respective formulas, thanks to strong acting and well-honed characters. These are American movies that restore our faith in Hollywood’s ability to entertain us beyond the summer midway of comic-book blockbusters.

Enough Said – In one of his last performances before his death, Sopranos legend James Gandolfini co-stars with Julia Louis-Dreyfus in this astute, funny and tender romantic comedy written and directed by Holofcener (Lovely and Amazing, Please Give). They play Albert and Eva, divorced parents who strike up an unlikely courtship as both are about to send their daughters off to college. They have curious professions: Eva is a mobile massage therapist who lugs her table around town, and Albert is a television archivist with an encyclopedic grasp of trivia from the early days of TV.

Both Gandolfini and Louis-Dreyfus, of course, are TV icons, but they succeed in creating rich, down-to-earth characters who become utterly convincing in their own right. However, so much is made of the fact that Albert is an obese slob, a heart attack waiting to happen, that the movie becomes layered with a meta level of posthumous tragedy: it’s impossible not to be reminded of Gandolfini’s sad fate. But he’s such a fine actor, and this role is so far removed from Tony Soprano, that we still accept it on its own terms. Both he and his co-star are actors we want to spend time with.

Louis-Dreyfus is so damn relatable. That wonderfully mobile face, which has punctuated her comedy timing with such finesse in Seinfeld and Veep, has its hyberbolic edges softened here in the service of realism. This is a film full of comic observation, but it’s not driven by gags. And Holofcener gives her heroine room to breathe, to reflect. This is a woman we feel we know, and who knows herself all too well. In a single reaction shot, with an awkward, embarrassed smile Louis-Dreyfus can convey a whole repertoire of expression—from sad vulnerability to ironically self-deprecating charm. The secondary characters, meanwhile, are well fleshed out, from the children of both leads to a divorced writer played by Catherine Keener.

Holofcener, whose directing credits include Sex and the City and Parks and Recreation, displays no special visual flair. Her thing is character and dialogue. It’s a bit like watching TV on the big screen—but the best kind of TV, with dimensional characters unembellished by Hollywood glamour, sharp yet believable dialogue, and a deep emotional resonance. 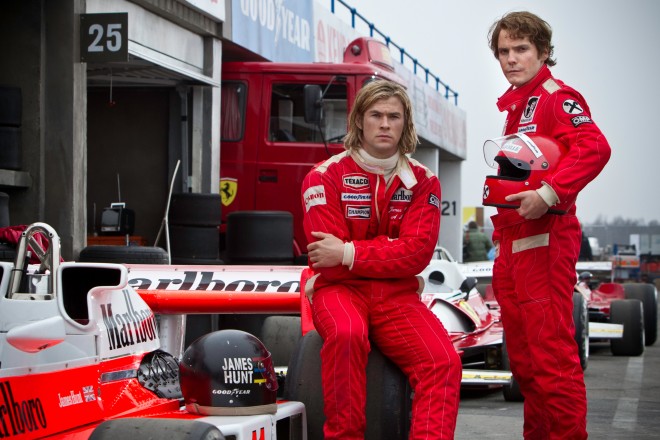 Rush – Although Holofcener’s film is fiction, and Ron Howard’s based on a true story, Rush still feels like the more fanciful of these two films. Like a race car mechanic stripping down his vehicle to squeeze out every ounce of speed, Rush streamlines and simplifies the saga of two legendary drivers, James Hunt (Chris Hemsworth) and Niki Lauda (Daniel Brühl), whose rivalry peaked in the 1976 Formula One season. They are a classic study in contrasts. Hunt is a handsome devil-may-care British playboy who seems to do everything for the pure fun of it; Lauda is an austere Austrian with a face like a rat and a mind like a rocket scientist, who treats the race track as a maze to be cracked. Polishing the story’s symmetry to a high gloss, Howard re-teams with Frost-Nixon screenwriter Peter Morgan, who seems to specialize in dramas that are essentially two-handers (Queen, The Last King of Scotland).

There are other characters in this film, including the love interests—Olivia Wilde plays Hunt’s first wife, Suzi Miller, who ditches him for an even more dissolute star, Richard Burton; and Alexander Maria Lara portrays Lauda’s first wife Marlene, who sticks with him through thick and thin, at least in the arc of this narrative. (They divorced in 1991.) But this movie is clearly no place for a woman. It’s all about boys and their toys, and both male stars fill their roles nicely. Although Brühl’s  is less glamourous, he has the meatier part in a story that shows Lauda struggling to recover from a grisly accident. Oozing with such high-octane sex appeal, Hemsworth is so damn debonair that every time a woman calls him James, you can’t help imagining he would make a perfect James Bond once Daniel Craig gets bored with the gig. He has that natural air of invincibility. But at the end of the day, the real stars of this picture are the cars. The race scenes are thrilling, and so beautifully shot, that alone makes Rush well worth the ride.