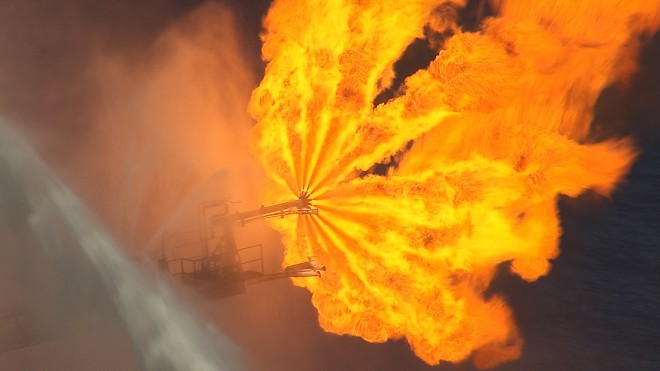 A scene of BP's Gulf oil spill in 'Payback'

Payback. Although the title sounds like it could belong to a Nicolas Cage thriller, this is a wake-up call from the opposite end of the cinematic spectrum. And the only fireball you’ll see belongs to BP’s drilling disaster in the Gulf of Mexico. Now, I know it doesn’t sound like a good time, a National Film Board documentary based on Margaret Atwood’s book of Massey Lectures about myriad forms of debt—societal, personal, environmental, criminal and economic. Not an easy sell. But bear with me. This captivating film comes from one of the most seductive, least didactic documentary artists at work today, Canada’s Jennifer Baichwal. Her subjects have ranged from expatriate writer Paul Bowles and Appalachian photographer Shelby Lee Adams to the toxic visions of Edward Burtynsky (Manufactured Landscapes) and exotic tales of lightning-strike survivors (Act of God). Like almost all her documentaries, Payback was shot by Baichwal’s husband, Nicholas de Pencier, a cinematographer whose lens seems almost magnetically drawn to poetry.

Wisely, Baichwal chose not just to illustrate Atwood’s book, Payback: Debt and the Shadow Side of Wealth, but to extend its ideas to fresh and vivid ground. Just as the book takes the notion of debt beyond financial matters to broad arenas of moral and political obligation, the film takes its ideas out into the world, as it unearths half a dozen specific stories in very different realms. Baichwal explores a irreconcilable blood feud between an Albanian farmer whose belly is scarred from bullets fired years ago by his neighbour. She drills down into the indelible environmental debt of BP’s Gulf oil spill. She makes us thinking twice about the beauty of tomatoes with stories of plantation-like slavery among Florida’s migrant farm workers. In examining the notion of “paying one’s debt to society,” Baichwal finds empathy for a drug addict who can’t stay out of jail, and presents media mogul Conrad Black in a tolerant light—the philosopher con turns out to be one of the film’s more thoughtful subjects.The documentary is also interspersed with more conventional talking heads, from Louise Arbour to Raj Patel, not to mention some languid scenes of Atwood at work that frame the narrative. As a writer, I do find it fascinating to watch her typing so terribly fast without using all her fingers. But after Ron Mann’s 2010 documentary of Atwood’s book tour, In the Wake of the Flood, I’m not sure she is owed quite as much reverent homage as the film pays her.

The strength of Payback lies in the revelation of its far-flung documentary footage, which is often provocative and poetic all at once. Perhaps most astonishing are the scenes of migrant farm workers  picking tomatoes, filling bushel baskets at a furious clip, tossing them high into the air to be caught be workers on a line of trucks. Over and over, the tomatoes fly off the plants and the baskets sail up in a relentless choreography of factory farming. This assembly-line circus of endless green tomatoes is like an agricultural Modern Times. Cinematic and sobering, it conveys the vicious cycle of exploitation and debt with an eloquence that words cannot express. 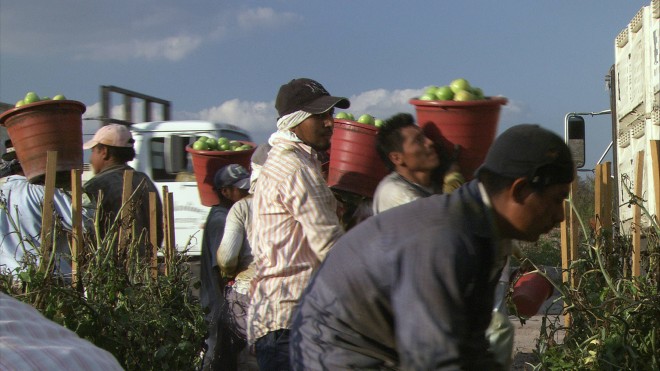