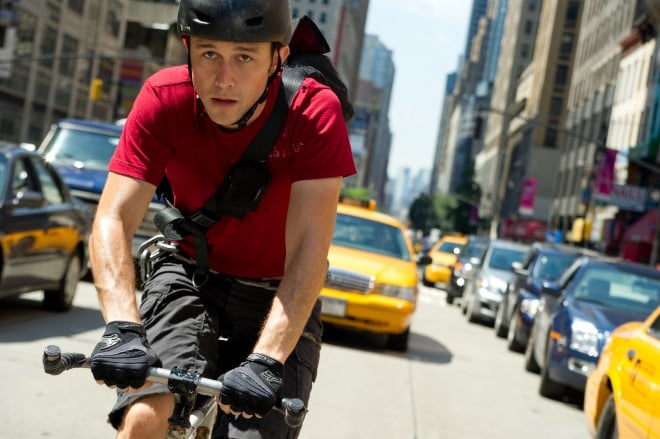 The butt end of August is usually a bad time for movies, especially action movies that didn’t rate a spot earlier in the summer. But Premium Rush is a spectacular exception to the rule. I may be biased because I’m an year-round, all-weather cyclist who likes to go fast, but for my money, this bike courier thrill ride is, jolt-for-jolt, the most exciting action movie of the summer. Sure, it doesn’t possess the dramatic heft of The Dark Knight Rises or the cataclysmic mayhem of The Avengers, but for sheer fun-on-wheels it leaves the superhero blockbusters in the dust. Premium Rush blazes a wonderfully fresh trail through Hollywood cliché. It’s not only an exhilarating antidote to the gonzo computer graphics that have come to dominate action movies. After watching countless car chases punctuated by pyrotechnics, it feels like an evolutionary leap forward to watch the breathtaking stunt work of cyclist warriors weaving through heavy metal traffic.

As if to drive home the comparison, Premium Rush is one of two chase flicks opening this weekend. The other is Hit and Run, a hokey action comedy written and co-directed by stunt driver Dax Shepard, who is also the star. A nostalgia vehicle for old-school gas-fueled comedy, it spins its wheels—literally, as Shepard burns rubber doing donuts in virtually every chase scene as if he has only just invented the wheel. The guy seems incapable of driving in a straight line. The cars in Hit and Run are like lumbering dinosaurs compared to the spartan bicycle that the outlaw hero of Premium Rush threads through Manhattan, running every light and breaking every law in sight. This is no fancy carbon 12-speed. It’s hard core: lightweight steel frame, no gears, no brakes.

Its rider is Wilee, a daredevil bike courier played with propulsive conviction by Joseph Gordon Levitt, an actor whose style is as lean and stripped-down as his bike. He obviously doesn’t perform the most violent stunts, but he spends much of the movie hurtling along on two wheels and clearly does most of his own riding.

Writer-director David Koepp spins a smart plot that gathers surprising complexity as the momentum builds. Wilee picks up an envelope destined for Chinatown that a dirty cop (Michael Shannon) is determined to steal from him. Shannon, his voice torqued with desperation, comes across as a stock villain early on, but as the plot thickens so his  performance ripens, splitting the difference between scary psycho and hapless buffoon. As other bike couriers get caught up in the intrigue—including a brash rival (Sean Kennedy) vying for Wilee’s Hispanic girlfriend (Dania Ramirez),  along with a frustrated bike cop—the chase zips all over Manhattan, with routes plotted out on full screen animations of the cyclist’s smart phone. The filmmaker employs a nifty conceit, mapping a series of collision-course trajectories, as Wilee makes split-second decisions, avoiding brutal accident options that we see play out in his mind. Some of the dialogue feels formulaic, and a number of the young cast are sharper cyclists than actors. But the ingenuity of the film’s stunts and the quick-shifting narrative make up for the low-rent drama. 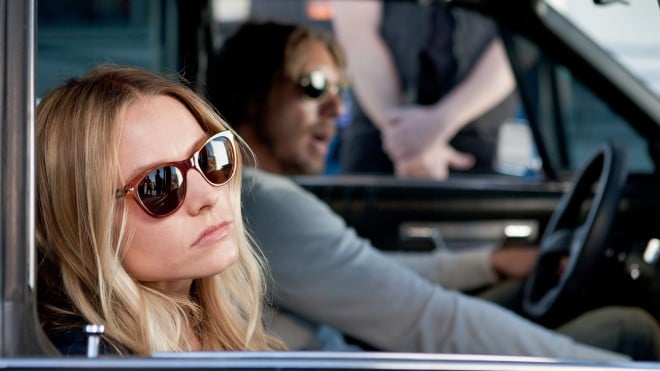 Kristen Bell and Dax Shepard in 'Hit and Run'

Championing the superiority of the bike over the car at every turn, Premium Rush is wired with a spirit of partisan glee, a renegade wit that is as agile as the action. There’s a super-heroic quality to the cycling, and the outlaw romance of the bike courier subculture is wildly exaggerated. Yet it’s easy for the most casual rider to identify, as cyclists dodge pedestrians, fly off curbs, infuriate cabbies, slam into car doors and bounce off windshields. It makes you wonder why it’s taken so long for Hollywood to discover the dramatic potential of a bicycle pinballing through an urban obstacle course. This is one case where I can’t wait for the sequel.

As for Hit and Run, it has its moments, which include some offbeat villainy by Bradley Cooper acting against type as a ludicrously nasty gangsta decked out in red pants and blond dreadlocks. Shepard stars as Charlie Bronson, an ex-criminal in a small town who’s trying to go straight but gets outed from witness protection and has to run for his life—along with skeptical girlfriend, Annie (Kristen Bell, Shepard’s real-life fiancee), who’s vying for an academic post in L.A. as a conflict resolution expert. For an action movie, Hit and Run finds more traction in its dialogue, than in its chase scenes, as the two leads debate the fine points of politically incorrect vulgarity.   But the story’s pacing is erratic, and the comedy is dragged down by the slapstick antics of Tom Arnold as a moronic marshall who can’t keep his gun in his pants. By the time the tires screech to a halt, this putative joy ride seems barely worth the price of gas.

Meanwhile, if you’re in the market for something more sedentary, with barely a frisson of action, this weekend offers another exception to the rule that good movies don’t open in the dog days of a summer: a modest little escapade called Robot & Frank, which offers a sly master class in acting:

I know what you’re thinking: you couldn’t drag me to see a buddy movie about some batty old guy and his robot butler. But Robot & Frank is far better than it has any right to be. It’s a droll, deft, disarming comedy that pulls off its limited ambitions with panache. The incomparable Frank Langella delivers a subtle, pitch-perfect performance as Frank, a retired jewel thief suffering from the early stages of Alzheimer’s. The story takes place in the near future. When Frank’s slick son (James Marsden) gives him a robot to care for him, Frank wants nothing to do with it at first. But this compliant appliance soon turns out to be both a comfort and an accomplice, as Frank reboots his criminal career. Meanwhile, in a half-baked subplot, Frank carries on a flirtatious relationship with the local librarian (Susan Sarandon), while his flaky daughter (Liv Tyler), a global do-gooder, breezes into town and tries to pry Frank away from his new friend. The secondary characters, however, seem flimsy and one-dimensional next to the robot. Voiced by Peter Sarsgaard with a mellow neutrality that owes a debt to Hal of 2001: A Space Odyssey, this household device is remarkably engaging, and provides Langella with a perfect foil—the ultimate straight man.