Recovered memories from a lost weekend at the festival 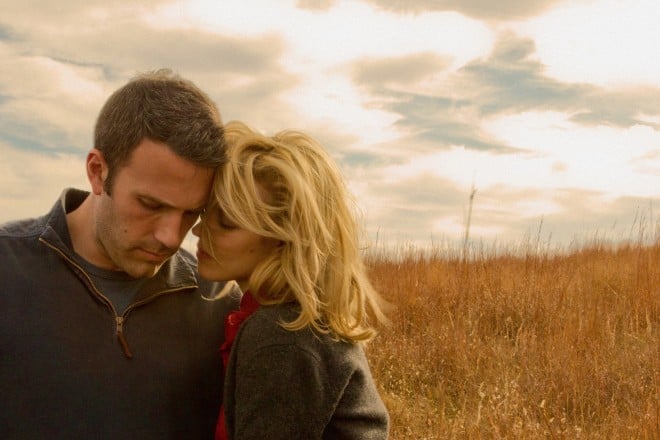 Ben Affleck and Rachel McAdams in 'To the Wonder'

Recovered memories from opening weekend at the Toronto International Flying Circus of Film. It’s like trying to recall a fever dream . . . Talking radical politics with Robert Redford as he eats potato chips . . . Watching hometown sweetheart Rachel McAdams vanish down the rabbit hole of Terrence Malick’s To the Wonder, as she searches for her lost role in an Oklahoma field with Ben Affleck . . . Then seeing her as an executive femme fatale planting a kiss on Naomi Rapace in Brian De Palma’s passionless Passion . . .  Interviewing Monty Python’s Terry Jones, and having to fill in the blanks when he doesn’t have the answers . . . watching Philip Seymour Hoffman and Joaquin Phoenix give an acting master class in The Master.

Sanity was last seen at 9 a.m. Saturday as I joined a packed press screening of The Master. Had to skip the Ryan Gosling movie, The Place Beyond the Pines, which was showing at the same time. Everyone Who’s Anyone in Hollywood wants an opening weekend slot at TIFF. The result is the scheduling equivalent to overlapping dialogue in an Altman film. I chose The Master because it was buzzed as the Second Coming of Paul Thomas Anderson (There Will Be Blood). And sure enough, that day it wins awards for acting and direction in Venice—as well as the runner-up Silver Lion for best picture, only because the jury wasn’t allowed to give it two prizes plus the Golden Lion.

The Master is, well, masterful. And amazing. There’s an Emperor’s New Clothes quality to the epic narrative, as if Captain Anderson is conjuring a cinematic feat no less cult-like than the Scientology-like religion created by Lancaster Dodd (Philip Seymour Hoffman)  in the film. But the period visuals and the performances are immensely charismatic. Playing Dodd’s alcoholic acolyte, Joaquin Phoenix is so good it’s scary. After the actor’s meta exile as a bearded hip-hop prophet, he’s back in the game, yet his performance as a deranged veteran of the Second World War, his volatile peformance has the same train-wreck momentum that made us concerned for his sanity in I’m Still Here. Though this time, it’s in a good way. Together he and Hoffman are like contestants in an Ultimate Fighting match staged by the Actors’ Studio. As the guru wears down the disciple in bouts of intense psychodrama, Phoenix has a vein bulging from his forehead that looks like it might explode.

The movie was powerful enough that I left the theatre in an altered state, and not knowing quite what to think. That’s why God invented writing. A publicist doing an exit poll ask me for my verdict. I told her I was still “processing”—that’s the movie’s term for what Scientology calls “auditing.” Then Ken Finkleman (The Newsroom) loomed into view and filled my critical void with an instant opinion. He said it was like a horror movie without actual horror but full of the best acting on earth. Later I ran into him again and announced to me, as if it were breaking news, that he’d decided The Master was “vapid.” Everyone’s a critic.

Went straight from The Master to an interview with Terry Jones, an alumnus of Monty Python’s Flying Circus. He was promoting A Liar’s Autobiography: The Untrue Story of Monty Python’s Graham Chapman, which plays like a wonderfully twisted memoir from the grave—an animated documentary narrated by Chapman, who died in 1989 but left recordings of him reading his memoir.

Terry Jones is a lovely old guy but not terribly articulate. So I had to prime the pump. I suggested that Chapman was Python’s movie star, while the others were character actors. He seized on the idea, and said he’d never thought of it that way before. The next day I encountered Jones in a jammed hotel elevator, with the film’s three directors and a clutch of journalists. He turned to me and said, “I’ve been thinking about what you said about Graham, and I’ve been using it in interviews.” Great. We’re generally asked to hold off publishing festival interviews until a film’s release, and here was Chapman gleefully making off with my idea on an elevator.

While brave civilians spend hours lining the sidewalks in front of the theatres, the media hordes traipse through hotels, working the publicity mill. It’s an alternate universe, an industrial outlet mall of wholesale celebrity that plays by its own rules. As Robert Redford made his way to an interview with a bodyguard and a pair of handlers, those in the corridor were asked to clear out, for security reasons. Moments later, holding court in a hotel room, Bob was warm and affable as he struggled to open a tiny bag of potato chips then talked about directing himself as fugitive veteran of the Weather Underground in The Company We Keep. Redford is one of the few stars I’ve met who looks younger and more boyish off screen than on. After the interview, I sat in the lounge of the distributor’s hospitality suite, fiddling with my phone, and noticed him sitting next to me. I didn’t bug him or try to strike up a conversation. Then he went off do another interview. And although he was no longer in the room, a publicist asked me to leave the hospitality suite . . .  “for security reasons.”

Stardom is a mysterious thing.  I’m still wondering about our hometown sweetheart, Rachel McAdams, who got cast by two major American auteurs—Malick and De Palma—only to end up in two of their minor, more dubious works. I attended a private screening of To the Wonder in the hope of interviewing her. Then it turned out McAdams wasn’t doing interviews. Having seen the film, I now understand why. In a story that is almost free of dialogue, Affleck brings his French girlfriend back to a barren subdivision in America, where McAdams makes a fleeting appearance as his childhood sweetheart. Apparently she’s onscreen for all of 12 minutes. Then she disappears without explanation. The film belongs to Olga Kurylenko, the Ukrainian-born actress and model who plays the French girlfriend, and who was a Bond girl in Quantum of Solace. I’m interviewing her this morning. Why? Because she’s there, and there could be worse ways to spend a Monday morning.