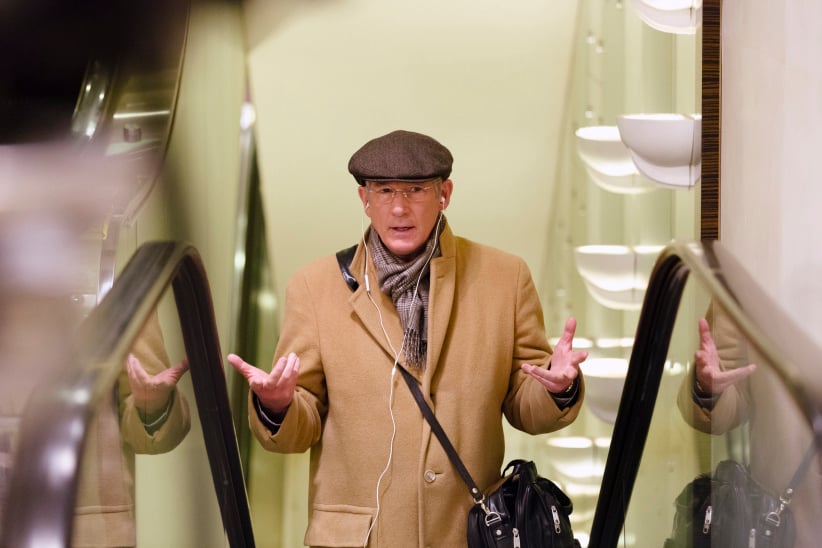 Welcome to the first in a series of columns called Movies That Matter, where we single out one film for special attention from the 40-odd titles released on average every month. It may not be the best movie of that time period, but one that shows us something we haven’t seen before—something remarkable. It could be the film’s innovation in style, its rare subject matter, or its resonance with the zeitgeist. It could be a groundbreaking performance from an unknown talent, or a veteran actor suddenly cast in a new light. Which brings us to the extraordinary comeback of Richard Gere in Norman: The Moderate Rise and Tragic Fall of a New York Fixer, which opens April 28.

One might well ask: whatever happened to Richard Gere? He was once one of Hollywood’s most bankable leading men, the smooth operator who set the bar for seduction in hits like American Gigolo (1980), An Officer and a Gentleman (1982) and Pretty Woman (1990)—and the serious actor who brought true grit to Internal Affairs (1990) and Primal Fear (1996). But Gere has not had a hit in decades, and has been long absent from the Hollywood A-list.

That’s not just because he got old. At 67, Gere is a silver fox, trim and debonair, and younger than Harrison Ford, Robert De Niro, Sylvester Stallone and Robert Redford, all of whom continue to nab starring roles in studio pictures. No, according to Gere, there’s just one reason for his fall from grace: China. An outspoken champion of a free Tibet and a close friend of the Dalai Lama, Gere says he has been shut out of studio movies because China, now a major market for Hollywood fare, refuses to distribute anything with his name on the marquee. The actor dates his exile back to a 1997 thriller named Red Corner, in which he starred as an American businessman in China wrongfully accused of murder. “MGM wanted to make an overall deal with the Chinese,” he recalled in a recent interview with Hollywood Reporter. “China told them, ‘If you release this film, we’re not buying it.’ And so, they dumped it.”

There may be other factors at play. Gere has always stood at the less illustrious end of the A-list, with no Oscar pedigree—he’s never received a nomination. And these days, the studios show little interest in financing the kind of modest, intelligent, and mature films that favour talk over pyrotechnics and don’t need the Chinese market. But Hollywood’s loss is our gain. Gere has found a new home in indie cinema, where he’s been doing some of the finest work of his career, whether playing fraudulent high-rollers in Hoax (2002) and Arbitrage (2012), or a homeless man shuffling through Time Out of Mind (2014).

With Norman, Gere’s acting achieves a kind of apotheosis. His breakthrough role in American Gigolo set the tone for a career in which he was most often cast as a slick hustler of one sort or another. Snake oil has always been his stock-in-trade. Now, as the desperate Norman Oppenheimer, a Jewish fixer peddling influence he doesn’t have, Gere creates a fascinating character that is the obverse of the roles that made him famous.

Written and directed by New York-born Israeli filmmaker Joseph Cedar, Norman unfolds with the elegance and intricacy of an O. Henry short story. A mysterious figure always wrapped in a suave camel overcoat, Norman is an outlier scrambling for some purchase on the margins of power. As his more comfortably placed nephew (Michael Sheen) tells him to his face, “You’re like a drowning man trying to wave at an ocean liner.” But Norman keeps insisting he’s “a good swimmer,” and as we watch him fight a losing battle against the current, we can’t help but root for him.

The story is set in motion by Norman’s bid to befriend a charismatic Israeli politician named Micha (Lior Ashkenazi), who is at loose ends during a visit to New York. In an impulsive attempt to impress Micha, and make him his new best friend, Norman buys him an insanely expensive pair of shoes. Three years later, Micha has become Israel’s prime minister, and retains a soft spot for Norman, who tries to cash in by leveraging an elaborate scheme of transactions involving his nephew, a bankrupt rabbi (Steve Buscemi) and a Jewish mogul. The deal is a classic house of cards, and we already know from the film’s subtitle that it will end in tragedy.

Still boyish after all these years, Gere will always be the kind of movie star who can never quite vanish into a role. But here his charm is reduced to a sadly transparent ruse. His grey hair flops over his forehead, his narrow eyes dart about nervously behind rimless glasses, and a subtle repertoire of twitchy behaviour undermines the careful composure of the suit, tie and camel overcoat. As in many of his hustler roles, Gere is once again an actor portraying an actor, a professional liar, but whose suspension of disbelief hangs by a thread.

As original as this character seems in Gere’s hands, it draws on an ancient archetype, according to the film’s director. Cedar says his story is a variation on “the classic narrative of the Court Jew,” who enters the inner circle by making himself useful, only to become dispensable. The archetype goes back to the Biblical saga of Joseph and the Pharaoh, and echoes through literature, from Shylock in The Merchant of Venice to Fagan in Oliver Twist. Like Cedar’s previous film, Footnote (2011)—a juicy intrigue about the father-son rivalry between two Talmudic scholars—Norman plays out as a shrewd and witty morality tale that never seems weighed down by its moral agenda.

“I think the whole world revolves around Normans,” says Cedar in the film’s press notes. “They’re like bees going from one flower to the next. Resenting the Normans is natural on one hand, but it’s very unfair. Everything that you can say negatively about this character has a positive opposite to it.”

One can imagine Gere the Buddhist relating to that. There are traces of Death of a Salesman in the story. And in the time of Trump, the film has a contemporary resonance that could not have been planned. Norman is stubbornly devoted to his own arcane Art of the Deal. But he’s a small-time loser, forever on the outside looking in. He’s the imposter who shows up at the dinner party without an invitation, and is about to be exposed. On some level, we’ve all been there. And no matter how pathetic he becomes, Gere makes him oddly relatable—no small victory for a character whose life is measured by the scale of his loss.

Norman‘s savvy distributor, Sony Pictures Classics, is expected to mount an Oscar campaign for the film and its star. And while it’s far too early to predict such things, if the Academy ever wanted to catch up to Richard Gere, honouring his role as a broken man at the dead end of the American dream tunnelling toward a pinpoint of light would offer the perfect opportunity—even if his acceptance speech would inevitably include a message that China would find intolerable.