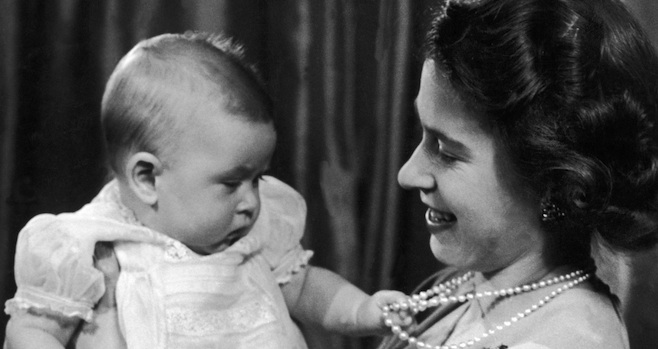 Anyway, here is how it works. First, rumours start circulating that the Princess may be having a baby, appearing side-by-side with an official statement from “official sources.” Their statement is that they can make no statement, not even of who they are. The process is that the rumours begin in the tabloids and then make their way into the wire services, which are free to report that someone else is reporting these rumours.

London, March 21 – A London Sunday paper said today Princess Elizabeth is expected to have a baby in October.

The story drew an official “no comment” from Buckingham palace sources. It is the first time a British newspaper has come out with a definite statement as to the princess’s pregnancy. However, the Sunday Pictorial said two months ago that Princess Elizabeth and Prince Philip confided to intimates they would like a baby in the first year of their marriage.

Today’s front page story in the People, one of the most widely circulated of the popular Sunday newspapers, said an official announcement cancelling the princess’ public dates is “expected at any time in the next few weeks.”

Then if British tabloids aren’t enough, there are foreign-language sources to report on, and rumours that the Princess is giving up strenuous activity. The court sources can now move from saying nothing to officially denying that the Princess has cancelled all her upcoming engagements. But this in turn just creates more anticipation, since these unnamed sources aren’t officially denying that the baby is coming.

London, April 1 – Responsible court sources took cognizance today of a French news report, attributed to a Colonel Backhouse, that Princess Elizabeth is pregnant. The report said the princess intended to call off her engagements in June.

A palace informant said: “That’s certainly contrary to fact. Instead of cancelling her June engagements, the princess has taken on three or four additional ones, and there is every likelihood she’ll be making public appearances in July. As for Colonel Backhouse, we simply don’t know who he is.” A palace source also denied that Princess Elizabeth had given up horseback riding.

There was still no direct confirmation or denial from any palace source on the reports that the princess is expecting a baby.

Finally, after two months of anticipation, speculation and tabloid tidbits, the official announcement comes and the world rejoices. And the Buckingham Palace insiders, whoever they are, congratulate themselves on how great a job keeping the whole thing a secret even though everyone seemed to know it was coming: “Despite all the talk, it has been a well-kept secret – at least to us. Not even the princess’s ladies-in-waiting have known she was expecting a baby.”

And, of course, along with the official announcement there are still rumours a-plenty, the biggest one being about whether the baby will be a boy or a girl. Anonymous sources have ways of telling us about these things, and they’re always right:

One reliable source said the royal physicians had medical reasons to believe the princess’s child would be a girl.
“Nobody, of course, can be sure about these things.”