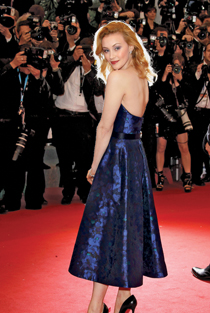 It was Sarah Gadon’s Cinderella moment in Cannes. She was dressed as a boy, doing a playful photo shoot with David Cronenberg’s daughter, Caitlin, when she realized she’d left her phone in her room. It was loaded with frantic messages: legendary fashion photographer Peter Lindbergh was waiting to shoot her for the New York Times. “It’s like, ‘Where are you?’ and I don’t even have a dress!” she recalls. “We raced down to the beach. Hair and makeup did me very fast, and I’m in this Stella McCartney white pencil skirt and amazing shirt and my hair is all flying and Peter Lindbergh is shooting me. It was so wild.”

Canada’s hottest rising star, who is about to shoot a movie with Jake Gyllenhaal, is not what you’d expect from her work. David Cronenberg, who ignited Gadon’s career, cast her as an icy blond estranged from her husband in two successive films—as Carl Jung’s betrayed wife in A Dangerous Method, then the frigid bride of a Manhattan billionaire (Twilight’s Robert Pattinson) in Cosmopolis, which had its premiere in Cannes. In both cases, she’s a model of composure. And as an airbrushed celebrity icon in Antiviral—the Cannes debut by David Cronenberg’s son, Brandon—she’s beyond composed: her character lies comatose for most of the film.

But in person, the 25-year-old Toronto actress shows not a trace of reserve. Sitting on a Cannes balcony in yoga pants, still giddy from the red-carpet rush, she could pass for a student—which she is, studying part-time to complete an honours B.A. at the University of Toronto. “It’s been a real trip,” she says. “You’re talking to the editor of Finch’s Quarterly and Adrien Brody is beside you and you meet Terry Gilliam and there’s Roman Polanski, and they’re giving away watches! It’s like, where am I? How did I get here? I just finished my exam three weeks ago!”

The exam was for “Feminist Approaches to Cinema,” says Gadon, with a gale-force laugh that sounds like it couldn’t possibly come from her delicate frame. She’s just five foot, three inches, with skin that’s translucent in the late afternoon light, and deep blue eyes. But she’s nobody’s dumb blond—even if people try to cast her as one. “It’s so often that I read for the bouncy, sunny girl men fall in love with who will solve all the romantic problems in the narrative. I don’t choose to work that way.”

In Cosmopolis, Gadon plays a poet from a wealthy family in a marriage-as-merger. “David made her conservative in her sexuality and rigid in her emotions,” she says. “She doesn’t allow a moment for the male lead to project any sort of romance onto her. You never get to see girls like me play characters like that.” In Cannes, Cosmopolis left many critics cold. When Gadon first saw it, she says, “I was frustrated, because I’d watched the trailer and thought we’d made an American Psycho film that’s really sexy and rock ’n’ roll.” But when she saw it again at the premiere, she realized “the dialogue is Brechtian—it’s meant to alienate the spectator, to distantiate the audience from the material.”

Summoning words like “distantiate,” it’s clear Gadon is as hooked on film studies as film acting. “I feel really stimulated when I’m doing both at the same time,” she says. The daughter of a psychologist father and teacher mother, she attended arts schools from an early age. Trained as a dancer, she began doing TV spots at 12. She traces her passion for film to university, where she fell for Italian neo-realism, the New Wave—and the work of her future mentor. “David is an incredible intellectual,” she says. “When he gives you a script, he gives you layers, a density of layers that you just peel your way through.”

In Cannes, Gadon became an honorary member of the Cronenberg clan, but didn’t hang out with Pattinson and has no boyfriend. “I’ve been turning into a pumpkin at midnight—I haven’t wandered onto anyone’s yacht.” Next week she starts shooting An Enemy, cast as Gyllenhaal’s wife in the first English-language movie by Oscar-nominated Quebec director Denis Villeneuve (Incendies). “The way Jake describes it,” she says, “it’s about a man having an existential crisis who leaves his mistress for his wife.” A cosmopolitan twist her mentor might appreciate.