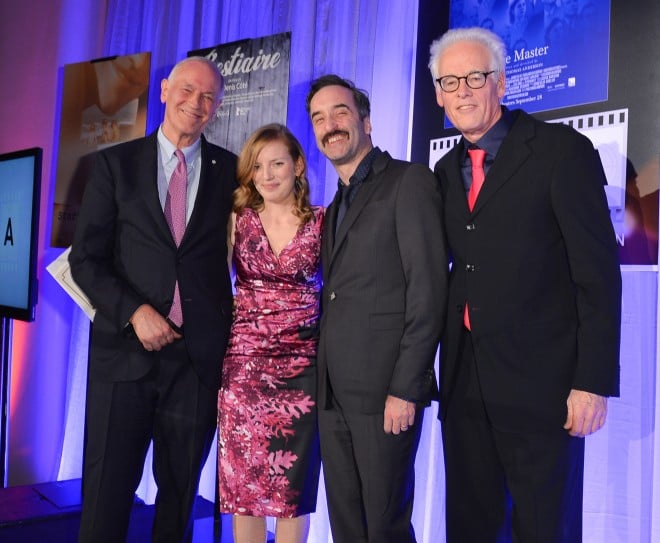 I’m the last journalist in town to blog last night’s TFCA Awards gala at the Carlu in Toronto. As TFCA prez, it’s hard to run a show and write about at the same time. By now, the story has been amply reported elsewhere, so I’ll be brief.

It was a big night, not just for Toronto Film Critics Association, but for the Canadian film community. The TFCA’s  newly endowed Rogers Best Canadian Film Award, now worth a staggering $100,000, has become the richest arts prize in the country. Sarah Polley won for her astonishing family memoir, Stories We Tell, while the other two nominees Denis Côté’s zoo documentary Bestiare and Michael Dowse’s hockey comedy, Goon, took home $5,000 each as runners-up. Polley also won the TFCA’s Allan King Documentary Award for Stories We Tell, accepting it from a hilarious Rick Mercer, who told a yarn about Polley visiting his parents in Newfoundland. (I wasn’t taking notes; you had to be there.) Don McKellar, who presented the Rogers prize to Polley, mused about three disparate nominees—”movies about zoo animals, hockey violence and adultery”—and quipped they could be melded into one great Canadian movie. I hope that mogul Robert Lantos, who was in attendance, was listening.

McKellar also delivered some devastating standup about the elephant in the room: the surreal incongruity of a bunch of critics presenting a prize that, for some Canadian filmmakers, would constitute multi-picture funding. He talked about how he and his colleagues have such a hard time raising money for Canadian films. Then along come the critics—”Hey, here’s $100,000!”  Polley, meanwhile, gave a gracious and emotional speech as she saw her professional and personal life merge with uncanny symmetry.  The gala dinner happened to take place on  her 34rd birthday. Having released two features in 2012 (Take This Waltz, Stories We Tell), and giving birth to a baby girl, she said this has been “the best year of my life.”  And host Cameron Bailey, TIFF artistic director, led the room of 260 guests in a singing of Happy Birthday. Praising Rogers Vice-Chair Phil Lind for supporting Canadian filmmakers with such a generous award, she spoke about the importance of the private sector lending its support to the arts.

Other Canadian winners at the TFCA gala included Mexican-born Toronto filmmaker Nicolás Pereda (Greatest Hits), who won the Deluxe-sponsored $5,000 Jay Scott Prize for an emerging artist, presented by director Patricia Rozema. Though only 33, Pereda has made six features and won international acclaim. Ryerson University student Andrew Moir won for the $5,000 Manulife Student Film Award for his short documentary Just As I Remember, which juxtaposes the experience of two men with ALS—a father of three in the early stages of disease and his own dad who is almost completely paralyzed. The award was presented by filmmaker Bruce McDonald.

For the full list of TFCA Awards, which also cover the main Oscar categories, go to: torontofilmcritics.com

Each year I cut a montage of the TFCA’s nominated films to show at the gala. Here is this year’s edition, which includes all 22 nominated films, and is scored with music from their soundtracks: