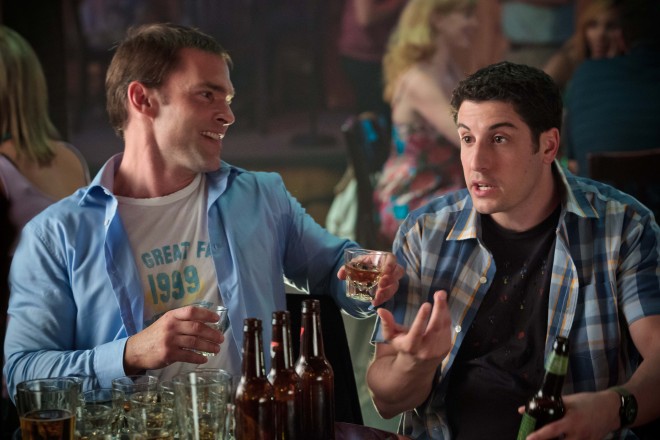 The word of the week is “school.” Among the films opening this Easter weekend are American Reunion, in which the bozos of American Pie reunite for their high school reunion; The Moth Diaries, a teen drama about a suspected vampire at a girls’ boarding school; and Bully, a much-talked about documentary about the tragic fallout from bullying among students.

American Reunion is the weekend’s major Hollywood release. It reunites all the principals from American Pie 13 years after this, uh, seminal gross-out comedy launched a dubious franchise.  In what you might call a backhanded homage to the opening of  Bridesmaids, the movie begins with a bed squeaking and bouncing. As the camera slowly tilts up, however, we see the mattress is not being pounded by carnal calisthenics, but by a jumping toddler. We are re-introduced to Jim (Jason Biggs), who’s been stuck in a sexless marriage ever since he’s become a father: both partners sneak off to masturbate rather than do each other.

As for the rest of the gang, Oz (Chris Klein) is a semi-famous sports anchor who’s dating a vapid supermodel. Kevin (Thomas Ian Nicholas) is a bearded (and presumably whipped) house husband. Finch (Eddie Kaye Thomas) is a suave cosmopolitan. And Stiffler (Seann William Scott) is working as a temp and is still pushing his luck as a joyfully unrepentant jerk. 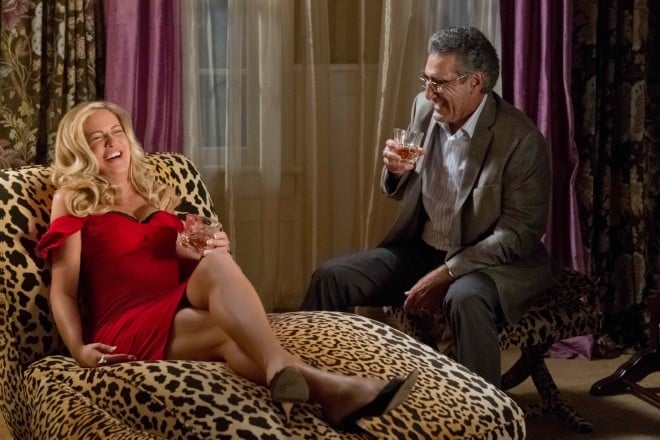 Major plot points involve girls on the beach having their bikini tops ripped off by jet-ski yahoos, and Jim trying to smuggle a drunk, naked 18-year-old babysitter-turned-babe into her parents house.  In the past decade, we’ve been jaded by Judd Apatow, Bridesmaids, and The Hangover. The gross-out-lite comedy of American Reunion seems almost quaintly sexist, with its two-scoop servings of T & A,  the now-mandatory penis sight gag, and a poop prank. By far the best thing in this movie is Eugene Levy, as the too-much-information father. His scenes are solid gold. And Sean Williams Scott is in classic form as Stiffler. But what surprised me is how the script’s sophomoric humour is padded with so much fuzzy moral sentiment. In the end, American Reunion is an orgy of nostalgia, and as wholesome as . . . dare I say it, apple pie. 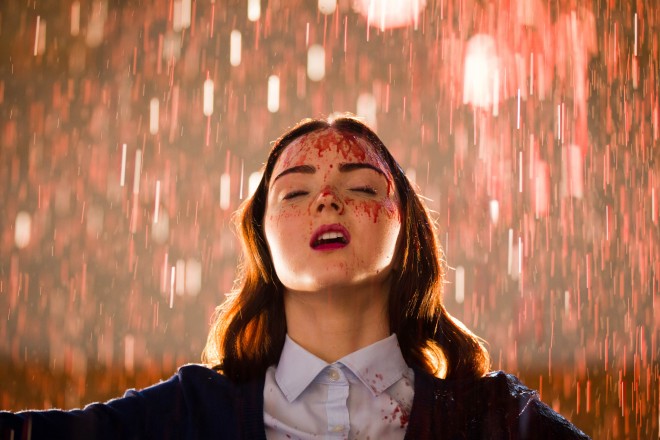 Lily Cole in 'The Moth Diaries'

The Moth Diaries hails from writer-director Mary Harron, the Canadian expatriate best known for American Psycho. Set in an elite girls’ boarding school, this Canada-Ireland co-production is about a teenage girl named Rebecca (Sarah Bolger) who’s haunted by her father’s suicide. She becomes increasingly alarmed as her best friend, Lucy (Sarah Gadon), falls under the spell of the tall, spooky, dark-eyed Ernessa (Lily Cole), a classmate who doesn’t seem entirely human. Lucy grows increasingly pale and sick, and no one seems terribly concerned. Rebecca, meanwhile, is harbouring a crush on her English teacher (Scott Speedman), a charismatic charmer with boundary issues.

There’s a faint blush of Twilight here, but The Moth Dairies aims to be more subtle, more tasteful. Based on a novel by Rachel Klein, it unfolds like a Gothic pajama party, as the vampire element flits between illusion and reality. This is a symbolic coming-of-age story about adolescent passion, jealousy between girls, and fear of sexuality. It’s beautifully shot by Declan Quinn, in muted, atmospheric tones. And it’s hard to blame Harron for taking the high road and steering clear of lurid melodrama. But there’s a problem when the heroine is the least compelling character, and when the horror is just not frightening. Harron’s canvas seems all-too-modest. We’re talking moths, not bats. And the story’s coming-of-age chrysalis never finesses the transformation to horror—too much metaphor, not enough metamorphosis. Sadly, this Canadian co-pro is no American Psycho.

If you’re looking for a real-life story of peer cruelty in schools, check out Bully. This American documentary follows five kids and their families over the course of a school year. It explores the tragic fallout of bullying, and the urgent need to confront it. The film defines bullying more broadly than you might expect. It doesn’t always leave bloody noses or broken bones. Verbal scapegoating can be just as damaging, and in some cases it leads to suicide. This documentary, which has became an agit-prop rallying point for a growing anti-bully campaign, is essential viewing for anyone affected by the issue. For the rest of us, it’s a compelling window into a closeted world. Like any film, what makes it emotionally powerful are the characters—the targeted kids and the frustrated parents. Their stories are harrowing, and heartbreaking.