'Selma' and the accuracy brigade 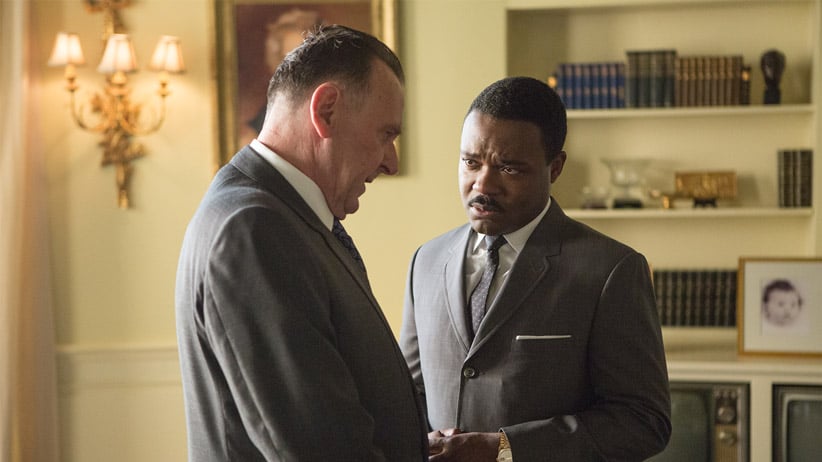 The Academy Award nominations will be announced this week, and Selma is considered an important contender for major nominations. Like many Oscar-hopeful movies, it’s experienced some backlash, but director Ava DuVernay and writer Paul Webb probably didn’t expect that the backlash would mostly focus on a dead white president. Yes, the big argument about Selma has been whether it’s fair to Lyndon Johnson.

You may have already heard the basic outline of this rather odd controversy. Selma portrays then-president Johnson (Tom Wilkinson) as reluctant to push through the Voting Rights Act, wanting Martin Luther King (David Oyelowo) to wait until the time is more propitious. A straightforward dramatic contrast between the politician who means well but has one eye on political considerations (and can afford to wait) vs. the hero of the film, whose point is that waiting is no longer possible or tolerable.

This portrayal of LBJ made the director of LBJ’s Presidential Library very upset. And then LBJ’s assistant jumped in to defend his boss’s role in the Voting Rights Act and the Selma marches. And then more and more people started writing about it until Wikipedia’s longest section on Selma became “Controversies regarding historical accuracy.” If Selma doesn’t perform well at the Oscars, some of it might be blamed on the coverage getting swallowed up by this story. DuVernay was not one of the nominees for the Directors’ Guild of America awards, a bad sign for her chances at the Oscars.

Most recently, veteran journalist Elizabeth Drew wrote a long piece for the New York Review of Books called “Selma vs. History,” in which she said the controversy has opened a debate on “whether and how much truth the movie industry owes to the public,” and said that “young people in movie houses boo Johnson’s name.” I’m not sure where that’s happening, although there are a lot of movie houses, and it could be that some people react that way; Johnson’s not the villain of the film, but, dramatically, he’s portrayed as something in the hero’s way—a representative of the forces of political compromise, and the idea that King has to deal with resistance from his friends, not just his enemies.

Now, as historical inaccuracies in movies go, this seems pretty minor. You could argue it falls more into the category of interpretation of the facts, rather than misrepresentation. There’s been some speculation that this whole issue has blown up because we can’t resist making this story about the white guy, even in a movie that specifically tries to get away from the tradition of showing civil-rights stories through the eyes of the (inevitably) white politicians who pushed the laws through. There is an interesting story to be made about the compromises, deals and strategies involved in legislation, but this isn’t that movie.

But I think this may also have “gone viral” (are we still saying that?) specifically because it’s about LBJ, and people who knew or wrote about him have become rather protective of his legacy. After liberals turned on him over Vietnam, he was hated on all sides of the political spectrum, and only recently has he started to get some respect again among liberals. Johnson’s fans may be hyper-sensitive to any attempt to downplay his role in civil rights legislation; again, I think they’re misreading what the movie is supposed to be about, but I can see why someone who knew or worked for LBJ would be on the alert for liberal slights to the old man. In other words, this may not be about the movie as much as it is about the quest to restore LBJ’s reputation.

To the extent that it’s about the movie, what critics always seem to be worried about when they talk about historical accuracy—and, as I said, movies typically change history a lot more than this—is the fear that impressionable people will think they’re getting the whole story. Drew, criticizing Selma and other, more openly inaccurate movies, such as Frost/Nixon and The Imitation Game, writes: “Is every kid who’s misled by Selma going to take a seminar on it? Our history belongs to all of us.” Historical movies are often presented as partly educational, schools frequently use them as a teaching tool and, of course, our knowledge of history tends to be shaped more by fiction than by history books.

So you can see what she’s getting at there. There’s no doubt that many people will see a movie and not read more about the historical record. To take a movie that did win the Oscar, huge portions of Amadeus are either completely made up, or a distortion of the historical characters as people knew them. (Mozart was not a frat boy, even if he sometimes made obscene jokes in his letters.) Historically minded people never tire of pointing that out, or that many people only know about Mozart and Salieri from what they see in the movie.

But do movies have a responsibility to keep in mind that many people won’t read further? I don’t think they do. Not just because total accuracy is impossible (again, opinions differ on what an “accurate” portrayal of LBJ would look like, particularly in a story where he’s not the main character). But because the job of historical fiction has always been to comment on history, not to retell it.

And usually, the point of the commentary is to tell us something about the times we live in. The Romantics who popularized historical novels were using a mix of real and fake details to tell us what our modern society was missing (usually, a sense of chivalry, a concept we wouldn’t even have heard of, if not for fiction writers). Some movies want to tell us that society hasn’t changed enough since then, others try to make us feel good about how much we’ve changed. But it’s always about us and how we feel about the story right now. Real history is supposed to be, as much as possible, trying to understand what it felt like at the time.

Which means that, once a historical figure becomes a character in a movie, he or she (usually he) is not the person his friends knew. He’s really a commentary on the situation he was in, or a foil for the main character of the movie; the rules of drama take over from the rules of history. There’s no way for Selma to portray the LBJ his supporters want, because either that would make him the co-hero of the movie—totally against what it’s about—or he’d just come off as an antagonist anyway. The point of historical movies is not to be “fair” or even to be accurate; it’s to meld history with fiction to convey a message about modern life. And if people think they’ve seen the whole story, well, that’s not the movie’s fault.