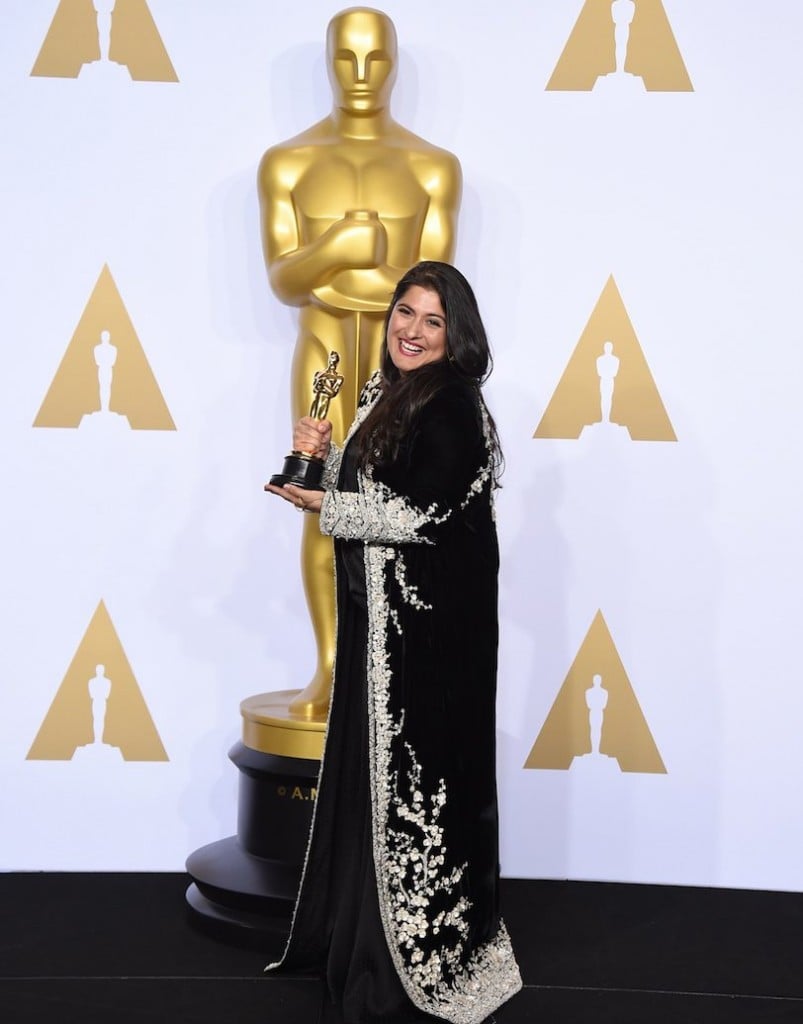 The 37-year-old director claimed her second career Oscar, this time winning for “A Girl in the River: The Price of Forgiveness” in the best short documentary category.

The film examines the case of an 18-year-old Pakistani girl who survived a brutal attack by her father and uncle bent on an “honour killing.”

“This is what happens when determined women get together,” a triumphant Obaid-Chinoy declared to cheers from the celeb-studded crowd.

“This week the Pakistani prime minister has said that he will change the law on honour killing after watching this film. That is the power of film.”

Those films lost to “Spotlight,” a muck-raking drama about sex abuse in the Catholic Church which emerged victorious over leading nominee “The Revenant.”

The movie was largely shot in Toronto and Hamilton with Canadian actors including Rachel McAdams, who was nominated but lost for her supporting role as a Boston Globe reporter, and Len Cariou as a cardinal. Producers included Toronto-bred Michael Bederman.

Other Canadian hopefuls who went home empty-handed included writer Emma Donoghue who was nominated for best adapted screenplay for “Room,” and chart-topper the Weeknd, who was up for best song for “Earned It” from “Fifty Shades of Grey.”

“Room” did earn a statue by way of best actress winner Brie Larson, a U.S. starlet on the rise for her turn as a resilient mother determined to give her son a happy childhood after years living in captivity.

Obaid-Chinoy adds Sunday’s trophy to one she claimed in 2012 for the documentary short “Saving Face,” about acid attacks.

“A Girl in the River” is the latest in a series of socially charged investigative films from her Karachi-based film company SOC Film.

Rights groups estimate that about 1,000 Pakistani women are killed every year for “bringing shame” to their families.

The brutal tradition allows murderers to avoid punishment if they are forgiven by the family of their victims.

The Pakistani premiere was attended by senior cabinet members and diplomats. After the screening, Prime Minister Nawaz Sharif vowed to change laws that allow families to murder their daughters in the name of “honour.”

Obaid-Chinoy’s other accolades include a Queen Elizabeth II Diamond Jubilee Medal, a Crystal Award from the World Economic Forum and a state honour from the Pakistani government.

In the weeks leading up to the Oscars, Obaid-Chinoy said she was grateful to see her nomination spark discussion around religiously motivated murders.

“I think that that’s a win in itself because it’s such a difficult topic and people shy away from it, normally,” said Obaid-Chinoy, a dual citizen who lived in Toronto from 2004 to 2015.

Her competition Sunday included Toronto-based journalist Adam Benzine, who was up for his short film “Claude Lanzmann: Spectres of the Shoah.”

“A Girl in the River: The Price of Forgiveness” is set to air on HBO Canada on March 7.