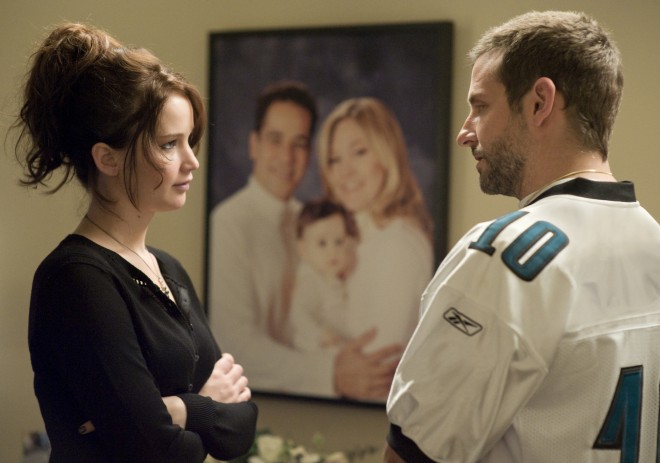 Silver Linings Playbook, an off-kilter comedy by David O. Russell (Three Kings), has been crowned the most popular film at TIFF—winning the Blackberry People’s Choice Award, voted by an online ballot of audience members. The prize was announced at an awards brunch today, the final day of the festival, along with a string of other prizes. TIFF, unlike Cannes, doesn’t host an international competition, but a jury does award cash prizes for Canadian films, and the festival’s audience poll has often been a predictor of Oscar success. Previous People’s Choice winners include American Beauty, Slumdog Millionaire and The King’s Speech. Even without this award, Silver Linings Playbook—which features dynamite performances from Bradley Cooper and Jennifer Lawrence—appeared to be Oscar bound, especially with Harvey Weinstein driving its campaign

TIFF’s $30,000 prize for best Canadian feature went to Laurence Anyways, the epic tale of a romance that’s derailed by the man’s transsexual awakening. The third feature directed by Quebec wunderkind Xavier Dolan, it’s virtuosic feat of filmmaking though some viewers, myself included, found its running time of almost three hours to be unjustified. Sarah Polley’s acclaimed memoir doc, Stories We Tell, was considered the front-runner.

In accepting his award, Dolan, who was shaking with emotion, said “I’m honestly surprised. At one point I thought this film would be forgotten.” Acknowledging the challenges of his movie, he said, “It’s as scary for people to go see it as it was for us to do it.” And as he embraced producer Lyse Lafontaine, praising her largesse and declaring his love for her, Dolan said, “Your balls are bigger than mine.”

The TIFF Canadian jury, meanwhile, split the prize for best Canadian feature debut between Brandon Cronenberg’s Antiviral and Jason Buxton’s Blackbird. TIFF artistic director Cameron Bailey said that the prize would doubled so that each filmmaker would receive the full purse of $15,000.

Bailey, meanwhile, made a social-media booboo with a tweet  congratulating Silver Linings Playbook director David O. Russell that leaked through the Twitterverse just as we were sitting down to the awards brunch. That’s ironic considering that Blackberry sponsors the award, and that the filmmakers will receive a Blackberry Playbook. The first runner-up for the audience award was Ben Affleck’s wildly entertaining, if irresponsible, Argo, about the C.I.A./Hollywood rescue of six Americans hiding in the Canadian embassy during the 1979 Iran hostage crisis.  (It had more CanCon than most Canadian movies, and the local audience ate it up, but it would have been perverse if Canadians awarded a fiction that robs credit from Our Man in Tehran, Ken Taylor.)  The People’s Choice runner up was Eran Riklis’ Zaytoun, an unlikely road movie about a Palestinian boy and a downed Israeli fighter pilot, both trying to get back “home” through war-torn Lebanon in 1982.

As for Silver Linings Playbook, it was also one of my top 10 faves of the festival. Here’s what I wrote about it: “Football, mental illness, dance and romance mix with Altman-esque chaos in an off-kilter crowd pleaser from David O. Russell. Bradley Cooper is pitch-perfect as an ex-mental patient who goes off his meds and moves back home to an OCD dad played by De Niro. Jennifer Lawrence steals the movie so deftly we don’t even realize we’re watching a romantic comedy until we’re hooked by the plot’s Hail Mary pass.”

Cooper meanwhile was the subject of a pre-festival piece I wrote for the magazine.