Speed-dating the stars: talking life, death, and anything but movies

In interviews with The Meyerowitz Stories' Dustin Hoffman, Adam Sandler, Ben Stiller and Emma Thompson, the stars riff on family, art and happiness 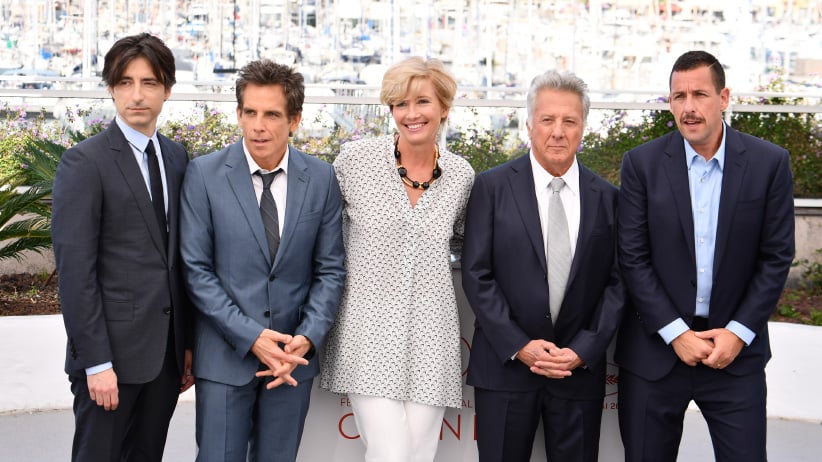 Maclean’s film critic Brian D. Johnson is back at the Cannes Film Festival, taking in a crucible moment for the fest and the industry at large. Check back for more dispatches at macleans.ca throughout the festival, which runs from May 17 to May 28.

In Cannes, you never know what the day will bring. Yesterday morning started at 8 a.m. with a widescreen close-up of open-heart surgery in a movie called The Killing of a Sacred Deer that has no deer in it. Right after it, at the film’s press conference, Nicole Kidman raved to press about her “passion for pushing boundaries” in a role that has her lying naked and lifeless across a bed for her husband, the heart surgeon, in a sex game called “general anesthetic.” In the afternoon, in a penthouse suite of the Carlton Hotel, as a seagull the size of a cat perched on the balcony ledge, Ben Stiller talked to me about creative challenges with a gaze that had the searing intensity of Derek Zoolander’s “Blue Steel.” Next to him, Adam Sandler looked ill at ease, and tried to put on a happy face as he complained about missing his kids back home in L.A. A few minutes later, I watched Dustin Hoffman fight back tears as he told an intimate story of seeing a family member take her last breath. Everyone I met seemed desperate to talk about anything but movies.

But first, some context. At this year’s Cannes, several times a day, we’ve been stepping out of the brilliant sunshine of the French Riviera, then herded through airport-level security to congregate in a dark theatre and watch civilization go straight to hell. Having seen 12 of the 19 features in the main competition, plus a few outside of it, I’m now in the home stretch of the Cannes Film Festival, and a definite pathology has emerged: The most powerful movies all paint a severely grim picture of humanity, often featuring children in distress. Those children include a Russian runaway who flees his divorcing parents in Andrey Zvyagintsev’s Loveless; two deaf American kids searching for lost parents in Todd Haynes’s Wonderstruck; an orphaned Korean girl trying save her pet monster from an Orwellian slaughterhouse in Bong Joon Ho’s Okja; a French teenage girl who watches her family disintegrate from a chilly remove in Michael Haneke’s Happy End; and two siblings hospitalized by a mysterious paralysis in the deadpan horror of in that deer-less deer movie from Yorgos Lanthimos.

Then there’s shambolic family ruin of The Meyerowitz Stories—a Noah Baumbach comedy in which the disturbed children are grown men. Adam Sandler and Ben Stiller play Danny and Matthew Meyerowitz, a pair of squabbling brothers who compete to eke out some love, or at least a smidgeon of respect, from their irascible, self-absorbed, pontificating father. He’s Harold Meyerowitz, a New York sculptor who’s a legend in his own mind, a lion in winter who’s convinced he’s never had the recognition he’s due. In a bravura performance, a white-bearded Dustin Hoffman portrays this ranting patriarch like Rain Man re-engineered as Lear. But Sandler’s gravitas is the film’s most unlikely surprise. Famous for playing an overgrown child in his gravy train of dumb comedies, here Sandler doubles down on the dramatic heft he first showed in Punch-Drunk Love (2002) and Funny People (2009), and pulls new depths of maturity out of the closet.

Baumbach writes and directs highly witty portraits of New York’s Jewish intelligentsia like a younger but wiser Woody Allen. Echoing the themes of The Squid & the Whale and While We Were Young, his new feature is another intergenerational x-ray of artistic ambition and failure, composed with densely scripted volleys of sharp dialogue. It’s so wordy that with French subtitles, non-English speakers in Cannes don’t watch the movie so much as read it. Everything about this small indie movie, which was shot on Super 16mm film, seems old-school—except that it was picked up by Netflix, which will release it later this year without theatrical distribution. 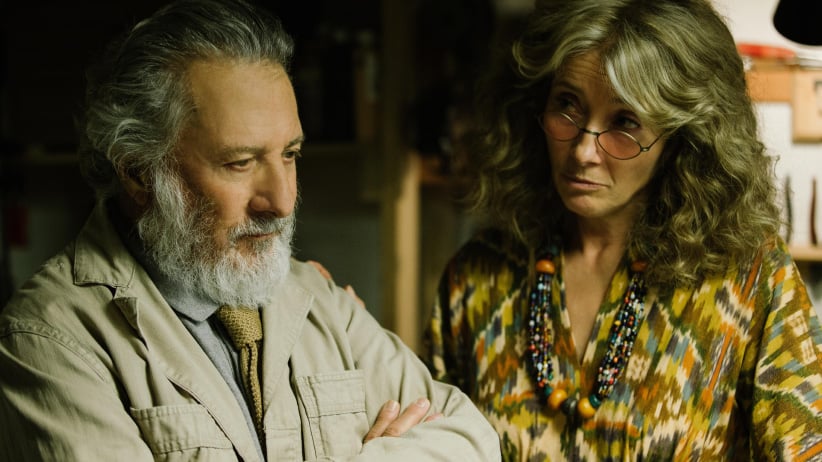 Yesterday, I interviewed Sandler, Stiller, Hoffman, and British actress Emma Thompson who, in a Streep-like feat of accent and attitude, plays an aging American hippie, the patriarch’s fourth wife. But landing interviews in Cannes is a mixed blessing. With 4,000 accredited media in Cannes, one-on-ones are virtually impossible. Instead, you fight for a roundtable session with a cluster of international journalists who talk at cross-purposes. Doing group interviews with four actors in 40 minutes is like celebrity speed-dating. It’s a crap shoot.

Stiller and Sandler, buddies ever since Stiller played a bit part in Happy Gilmore (1996), worked the room of journalists as a duo. They were a study in contrasts: Adam, still wearing his moustache from the movie, wore an untucked white cotton shirt and seemed uneasy. Stiller was slickly styled, with spiky hair, and a suit and tie in closely matched shades of midnight blue. His character is an affluent financial wizard, while Sandler’s is a failed musician resigned to being a house husband. But both characters seem equally crushed by a lack of self-esteem. So in Cannes, where status is measured on a red-carpet scale like no other, I felt it was worth asking both of them if they are still haunted by the prospect of failure even now that they’re hugely successful.

Sandler responded by talking about his mood swings after the film’s Cannes premiere the previous night. “It was as good as it gets showing a movie to an audience, one of the greatest nights I’ve ever had. The applause, the respect. Then at the after-party, I had ups and downs. I’m going, ‘I gotta figure this out. What’s wrong with my family? Blah, blah, blah.’ I’m never 100 per cent at ease, through success, through failure. I’m never going to have a perfect day.”

“I can’t identify with anything he said,” countered Stiller, who was only half-joking. “I’m always thinking, what’s the next thing, what’s the next challenge? That aside, there’s the reality of judgement in life from other human beings.” Film critics perhaps? “Some people care less about that than others,” he added, “and they’re the ones who are the most evolved and have the happiest lives. It’s the opposite of what show business is. You give a piece of yourself, and put yourself in your work, but what we do is not who we are.”

Throughout this testimonial, Stiller looked me in the eye, and that’s when his gaze suddenly lit up with that Blue Steel intensity, a sudden incandescence that seemed almost supernatural. He didn’t do the Derek Zoolander pout; he was just being Ben Stiller. But it did make me wonder if it’s a thing that he does for effect. Or if, like certain movie stars, he has a light behind his eyes that he can dial up at will. 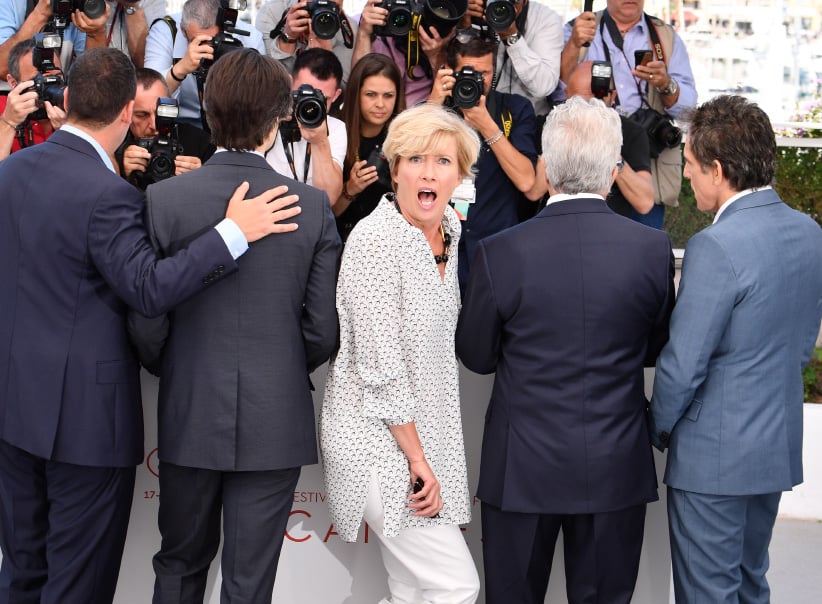 Down the hall, Dustin Hoffman and Emma Thompson were ushered into another hotel suite where two armchairs awaited them. Hoffman moved his and replaced it with a hard-backed conference chair, explaining that his back requires right angles. Then he got up and closed the window to the balcony, worried about the room’s acoustics. He has a reputation for being meticulous on the set.

Earlier, Baumbach had told us he partly based Harold’s role on his father, and wrote it with Hoffman in mind. “Dustin wanted more than anything to do the part as I envisioned it,” he said. But then the more they talked it, Hoffman said he felt he was playing his own father. In scene after scene, “I was saying “that’s my father, that’s my father, that’s my father—so what’s there is a combination of the two of us, because both our fathers were failures.”

As Hoffman and Thompson held court, I asked these two acclaimed actors, who each have a pair of Oscars, the same question I posed to their co-stars—does the fear of failure ever completely evaporate?

“You can’t do anything if you can’t fail,” said Thompson. “Failure is the key to art of all kinds.”

“When I made Tootsie,” said Hoffman, “Jessica Lange was going with [ballet dancer Mikhail] Baryshnikov and I got to know him a bit. We were talking one day and I said, ‘what is it like when you do a ballet,’ and it’s boom! — you just nailed it. He said, ‘No, never. A moment. A moment that was perfect. That’s all you do.’ ”

Thompson offered a quote from the legendary French photographer Henri Cartier-Bresson: “There are just two things, the moment and eternity, nothing else.”

Then as the conversation shifted from life to art, Hoffman told a story.

“My wife’s mother died just a few weeks ago. I knew my wife’s mother and her father since I was born because they lived upstairs in L.A., and my mother was best friends with my wife’s grandmother. I played the piano at her parents’ wedding. I was about 16. So I was quite close to Marsha . . .” At this point Hoffman begin to choke back tears. “She had MS for 35 years, went from a cane to a walker to a wheelchair and never gave up, wanted to live. She then had a stroke, heart attack—she was 85 when she went. We built a hospital in her home, because we could afford it, nurses and this and that. We’re with her and we know that the fight is going to be ending. She’s taking these deep breaths but she doesn’t want to go. Her breathing was becoming more shallow, and more shallow. It’s like a minute apart and you think she’s gone. And then there’s another breath. And it keeps going on then there’s no breath. And I swear the line that come right into my head, and that was a pure moment, was: ‘Boy, death doesn’t f–k around.’ I could swear she wasn’t there anymore. It was pfffffft. But it wasn’t nihilistic. It was, ‘oh, there is a soul.’ ”

Silence. Thompson finally broke the spell, saying, “The Inuit have this great word, sila. It means ‘weather,’ but it also means ‘consciousness.’ Because they live right at the edge of life, they go out and look at the weather, but they’re not really looking at the weather. They’re making contact with the earth, the animals, the sea, the sky. They’re making full body contact with everything. I can’t remember why I told you that . . . There are lots of defining moments. Giving birth. That was mine.”

“We could do this for days,” said Thompson, “not talking about the film at all.”

Occasionally in Cannes, anything seems possible.