'Spy': Can this deliciously funny film overcome its marketing?

Melissa McCarthy is pure genius in this comic thriller 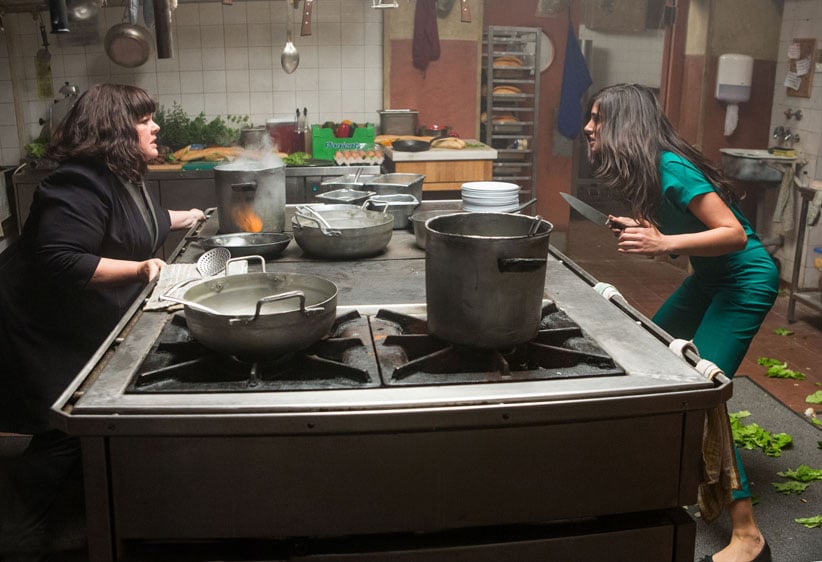 I remember the scene when I realized that Spy was going to be a deliciously funny film. Susan Cooper (Melissa McCarthy) is sent to Patrick, the CIA tech guru, to get outfitted with gadgets for her assignment in Europe. After years at a computer, she’s become an emergency substitute field agent after the villainess finds out the identities of the agency’s top agents. Others get fancy weapons worthy of James Bond; she’s handed hemorrhoid wipes (which contain chloroform), a bottle of stool-softener tablets that counteract poison, and a Beaches watch. I’ve no clue what the watch does; the short scene was so packed with one-liners that I struggled to write notes in the dark theatre, all the while laughing so hard tears were falling down my face.

Refreshingly, it’s a film that revolves around female power. The main heroes, all female, are well over 30 and do not possess impossible Hollywood figures. Sure, everyone makes fun of Susan Cooper’s clothes, hair as well as her secret-agent talents (or lack thereof), but I can’t remember a single reference to her weight. The nasty, make-fun-of-the-not-pretty-woman overtones so often prevalent (yes, Miss Congeniality, I’m looking at you) are blessedly missing. As for any female who is wrinkle-free, a size 2 or both? Let’s just say they get their comeuppance. All of them. The men may be handsome, but are relegated to sidekick roles. Jason Statham is a standout as agent Rick Ford, the epitome of the should-be-dead-but-can’t-be-killed hero: “I’m immune to 179 types of poison—I know because I injected them all at the same time.”

While Melissa McCarthy is often a delight on screen, her film selections are a tad uneven, to say the least. For every Bridesmaids and St. Vincent, there is The Heat and Tammy. So while I wanted to see Spy—written and directed by Paul Feig (Bridesmaids, The Heat)— I was also girding myself for disappointment. The marketing campaign was distinctly off-putting. The poster is a riff on Goldfinger, but is McCarthy playing the lead action hero or the disposable romantic female? And the trailers seems a classic representation of the “let’s throw together the best bits in hope of fooling a few people” gambit to fool viewers. The advance screening in Toronto was less than 60 per cent full, and I heard many rumblings. “How bad could it be?” was the general refrain.

Then there is the premise. A fish-out-of-water plot is pretty much hit or miss, depending on the acting and script. The bitter, woman-hating tone to those movies has always baffled me—why do we pay money for films in which women only succeed when they completely transform their bodies, and personalities, into the ideal preferred by men? And really clever humorous spy stories aren’t exactly thick on the ground. Think Kingsman and This Means War.

The start, with Susan Cooper behind a desk and suave agent Bradley Fine (Jude Law) in the field, did nothing to bolster my hopes. Then Cooper goes into the field, in a bid to stop the daughter of a dead megalomaniac from selling her inheritance, a tactical nuclear weapon. What follows is pure genius. Melissa McCarthy kicks ass, both as a comedian, and as an action figure. The tit-for-tat linguistic battles between Cooper and villainess Rayna Boyanov (Rose Bryne) are a master class in comic acting. She may wear disguises that even Mrs. Santa or a Mary Kay sales rep would wince at, but she can also do hand-to-hand combat while flinging out quips. Try that, James Bond and Jason Bourne. Best of all, while her opponents have access to top-drawer fighting items, her weapons and tactics usually involve plebeian objects. Who else could win a knife fight with an iron skillet?

Sure it’s completely unbelievable—though the plot is surprisingly logical, at least until the very end—but, honestly, what action film isn’t? It has all the slick production values and taut fight and chase scenes of any top-line thriller, while blessed with a light, fluffy attitude. Even better, there are plot twists and chase/fight scenes to satisfy all but the most die-hard action fan. After credits at the end of Spy started rolling, I had a hankering to see it again.