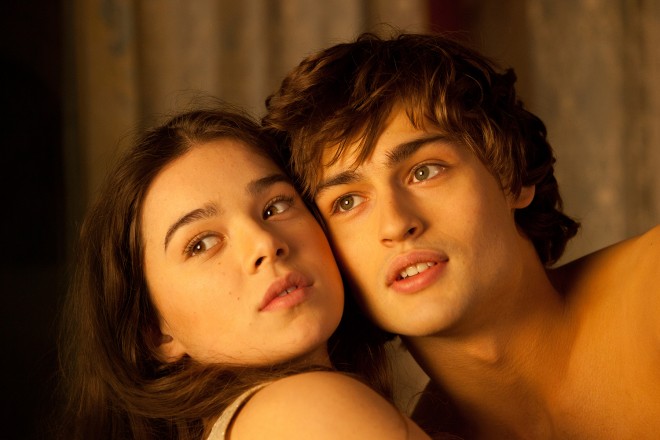 By far the best new release opening this weekend is Captain Phillips, starring Tom Hanks in the true story of a U.S. container ship hijacked by Somali pirates. Although it features Oscar’s favourite Everyman and comes from a Hollywood studio, it doesn’t look or feel like a Hollywood movie. Its rigorous authenticity makes you forget you’re even watching a movie. For more on Captain Phillips, and an interview with director Paul Greengrass, go to my piece in this week’s magazine. If, on the other hand, being locked up on a boat with Tom Hanks as he outwits a gang of desperate Somali pirates is not your idea of a good time . . . well, on the menu this weekend is a choice of two romantic misadventures featuring pretty faces and magnificent scenery—Romeo & Juliet and The Right Kind of Wrong. Both go out of their way to bring home a Hollywood fantasy, with disappointing results. But their flaws pale next to those of Machete Kills, featuring an embarrassment of stars enabling a director in the perverse act of making an intentionally bad movie. My reviews:

Romeo & Juliet It is the Bard’s most accessible play, and has already been adapted for the screen half a dozen times, not to mention the films it has inspired, from West Side Story to Romeo Must Die. One of the great things about Shakespeare is that he can take a lot of abuse. But there are limits. Baz Luhrmann’s 1996 film of the play, set in contemporary Miami, pushed those limits, swapping swords for guns and playing fast and loose with the text. Yet he got away with it. His Romeo + Juliet was bold, imaginative and exciting. And, above all, the soul of the play burned bright in the intense chemistry between Claire Danes and Leonardo DiCaprio, who was catapulted to heartthrob status.

This latest version tries to produce the same magic with a pair of rising stars from a new generation, Douglas Booth and Hailee Steinfeld, who seem even more contemporary, which is a problem, because this version is set in medieval times. There are moments, in fact, when it’s more like they’re on a date at Medieval Times.

With none of Lurhmann’s pop anachronism, Italian director Carlo Carlei stages the play as a lavish costume drama in its traditional setting of Verona, apparently aiming for the silken opulence of Franco Zeffirelli’s Romeo and Juliet (1968). But screenwriter Julian Fellowes (Downton Abbey) doesn’t just eviscerate the play, trimming it down by half; he mangles and streamlines much of the language. To service the cause of bringing Shakespeare to new, young audiences, almost anything is permitted. But destroying the poetry defeats the whole purpose of doing it in the first place.

As they perform what’s left of the play, the film’s young leads don’t do the language any favours, either. They race through their lines as if running a set of hurdles with an eye on the clock. Even that might be forgivable if they were rushing to some place of passion. But their chemistry is utterly absent. Steinfeld, Oscar-nominated for her role in the Coen brothers’ True Grit, was just 15 when she was shooting Romeo & Juliet. That may be age-appropriate for the role—Olivia Hussey and Claire Danes were no older in the Zeffirelli and Luhrmann productions respectively. But Steinfeld appears to be just going through the motions of romance. Maybe she’s pissed that Booth is so much prettier than she is, and that the camera dotes on him as if he’s the girl.

The film is not without its diversions. Paul Giamatti revels in his role as the Friar, stretching out Shakespeare’s language and making it sing; Leslie Manville (Secrets & Lies) gives the giddy energy of the Nurse a slightly psychotic edge; and Damian Lewis (Homeland) creates a creepily self-possessed Lord Capulet. But the performances are often upstaged by the  architecture as the film takes us on a first-class tour of northern Italy. And as our gaze drifts from the actors to admire a turret or a trellis, no amount of visual pleasure can make up for the fact that the actors playing our Romeo and Juliet are not only star-crossed but time-crossed—so out of synch with Shakespeare’s text, and his world, that you keep wondering why these kids don’t just avert their tragic fate by texting each other.

The Right Kind of Wrong 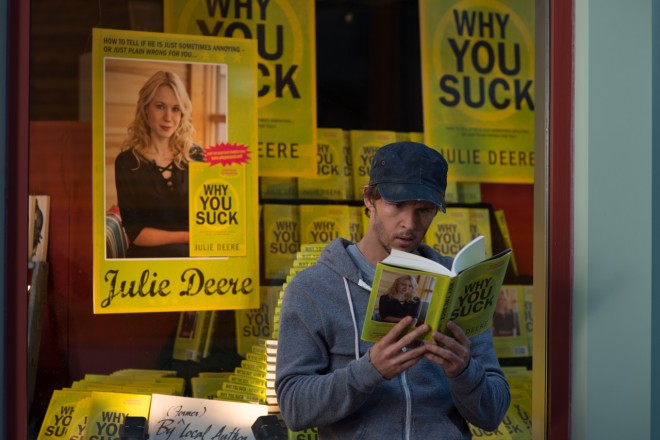 This  Canadian romcom starts out with great promise. And I’m not just referring to its juicy premise, in which a guy is ditched by a cruel girl who makes him fodder for a blog and a bestseller called Why You Suck. Nor the palpable appeal of its stars, who include Ryan Kwanten (True Blood), Sara Canning (The Vampire Diaries) and Catherine O’Hara (SCTV comedy legend). I’m referring to how The Right Kind of Wrong literally starts out—with one of the best title sequences ever. The opening credits are typed, as if on a computer screen, and riddled with typos that are corrected in real time with flurries of keyboard backspacing. Maybe you had to be there, but it’s a funny prelude. And as a typographic comedy of errors, it’s cool, stylish and possessed with a deft comic timing—all qualities that the rest of the film sadly lacks.

Leo (Kwanten) is a failed writer who turned down a fat Random House deal for his novel Sex and Sunsets (also the title of the novel on which the film is based), because he stubbornly refused to revise his manuscript. Now he’s working as a dishwasher. After being dumped and humiliated by blog sensation Julie (Kristen Hager), he finds his romantic destiny in a cosmic flash of love at first sight when he spies Colette (Canning) en route to her wedding. She is marrying Danny (Ryan McPartin), a ridiculously handsome Olympic athlete turned humanitarian lawyer from a wealthy family—a guy who looks perfect on paper but is obviously a total ass, a hopeless square, and a poor match for Colette, a down-to-earth girl who volunteers as an environmentally correct tour guide.  Leo spends most of the movie crudely stalking Colette in a series of slapstick misadventures, until his perseverance pays off in the most unlikely fashion.

The movie was shot in and around Banff, showing off its postcard vistas at every opportunity. Yet though Banff is one of Canada’s most familiar tourist spots, surrounded by  mountains that are virtual rock stars, nowhere does the movie indicate that we are in Banff, or even in Canada. Perhaps for fear of alienating the American market, the filmmakers took the safe route, setting the story in a generic Rocky Mountain town. Unfortunately, the script and the direction feel equally generic—safe, predictable and broad. Even the cinematography is off-key. The colour is so heavily saturated that the natural landscape looks strangely unnatural. That just be a deliberate decision, an attempt to give the picture a confectionary pop to match the heightened reality of its screwball romance. But it just looks cheesy.

The actors are blameless. There is genuine chemistry between Kwanten and Canning, who are both sexy, engaging performers. They just seem trapped in the wrong movie—which could be a romcom premise all its own. And as Colette’s wing-nut mother, Catherine O’Hara raises the bar with every scene she’s in, carving her own signature of off-kilter wit. But it just makes us wish the rest of the movie was on her wavelength.

The pedigree of the filmmakers is impressive enough that you have to wonder just what went wrong with The Right Kind of Wrong. It’s directed by Montreal’s Jeremiah Chechik (Benny and Joon, Avengers), and produced by veteran mogul Robert Lantos (Being Julia, Eastern Promises, Barney’s Version), along with his son, Ari Lantos. And they were working with a $15-million budget, which is downright munificent for a Canadian indie film.

To be fair, romantic comedies, which can appear so effortless when they work well, are devilishly difficult to pull off. Even when they follow a trusted formula, and are endowed with all the right ingredients and the best of intentions, without the right touch the formula can fall flat, like a failed soufflé. In fact, when so many things can go wrong in making a movie, it’s amazing that filmmakers get it right as often as they do. 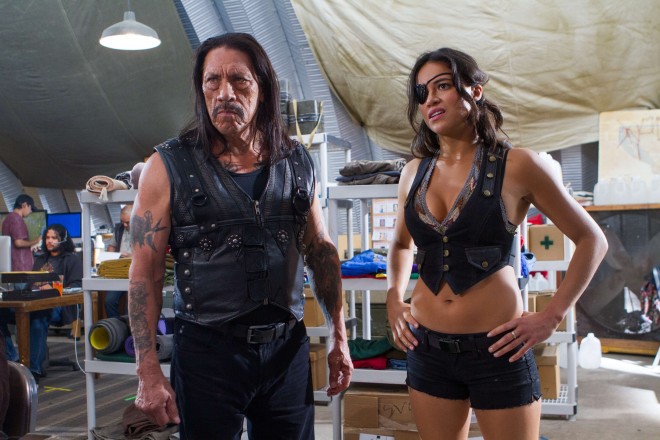 It’s fun for a while. But before it’s even half over, Machete Kills starts to kill us with boredom. Directed by cult favorite Roberto Rodriguez, it’s a sequel to Machete (2010), which was based on a fake trailer in Grindhouse, his 2007 collaboration with fellow B-movie fanboy Quentin Tarantino and Eli Roth. The grisly Danny Trejo resumes his title role, as a U.S government agent dispatched to Mexico to stop a criminal mastermind from launching a weapon of mass annihilation into space. But let’s not even discuss the plot. In an overstuffed homage to bad movies, Rodriguez has piled up a jumbo junkyard of novelty acts, including Charlie Sheen as the U.S. President, Mel Gibson as a Dr. Evil knockoff, Amber Heard as a ball-busting beauty queen, Sofia Vergara as a murderous madam, Demian Bachir as a madman with a missile launch key wired to his heart—plus Lady Gaga, Antonio Banderas and Cuba Gooding Jr. cast as incarnations of a face-changing assassin named Chameleon.

So many stars, so little time—a cattle call of celebrities slumming. The meta parody of Machete Kills is a self-congratulating exercise in overkill. Its onslaught of gags try so hard to be outrageous they become banal. It looks like it was way more fun to make than to watch.