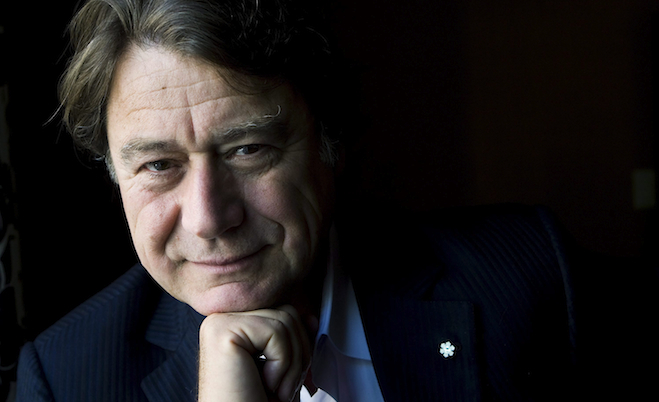 Veteran Canadian film mogul Robert Lantos, producer of movies ranging from Black Robe to Barney’s Version, is the most prominent voice behind Starlight, a proposed TV channel that would be solely devoted to Canadian cinema. Lantos is one of Starlight’s three principal shareholders, but the company’s roster of partners is a virtual pantheon of Canadian filmmakers—including David Cronenberg, Denis Arcand, Denis Villeneuve, Atom Egoyan, Deepa Mehta, Patricia Rozema and Paul Gross. In April, the CRTC will consider Starlight’s application for “mandatory carriage,” which would require carriers including Rogers, Bell and Shaw to give it a spot on the basic tier of cable or satellite service.

Recently on this website, Maclean’s blogger Jesse Brown interviewed George Burger, a partner in VMedia, a Toronto startup offering unbundled TV channels over the Internet. Burger launched a volley of arguments against the Starlight proposal that Lantos has asked to refute, claiming that they are based on erroneous data.

Maclean’s writer Brian D. Johnson interviewed Lantos by phone. [Note: VMedia has filed an intervention with the CRTC against the Starlight proposal, and so has Rogers Communications, which owns Maclean’s.]

Q: What did you find so upsetting about Burger’s comments?

A: First you should know that George Burger was an employee of mine at Alliance, approximately from 1995 to 1998, before I sold the company.

Q. Why did he leave?

A: His contract expired. [Lantos would not elaborate.]

Q: So where do you take issue with his arguments?

A: Let’s start with the numbers game—his statement that Starlight will cost the public $775 million over seven years. That number is grossly exaggerated. Starlight is offering a service that would cost 45 cents a month, or $5.40 a year. If you multiply that by eight million—the number of subscribers—you get about $300 million over seven years. Unless the carriers mark up the price. The numbers Burger is using presume the carriers would mark it up by more than a 100 per cent. Sure, they have a right to that, but why would they?

Q: What about his argument that Canadians should be forced to pay for a Canadian movie channel?

A: Let’s look at the context. All specialty channels charge. Most specialty channels, as well as mainstream networks like Global and City, the sports networks and Bravo, are owned by one of three conglomerates—Rogers, Shaw and Bell—which also own the means of delivery. The reason we have this concentration has to do with decades of protectionist politics, to protect the Canadian system from foreign competition. And today the primary tier of services, the ones most consumers get, are owned by one of the three conglomerates, with a handful of exceptions. For example, Rogers owns four sports networks and all four are part of the minimum tier that you can purchase. The point I’m making is that we don’t have a free market. We have a highly protected market that has resulted in consolidation of ownership. The only other channels that get on that tier are those that the CRTC mandates, and that has to do with matters of national importance.

Q: Burger says that the low box office share for Canadian films (2 to 2.7 per cent) shows that Canadians don’t watch them.

Q: Berger says that over 10,000 hours of Canadian films are already available on TV each year.

A: That’s not correct. The biggest number is found on the three pay TV movie networks. Among them the total time devoted to Canadian film was 5.2 per cent in 2011, down from 13 per cent in 2004. If you take all the specialty services in Canada across the board, based on CRTC logs for 2011, only 1.7 per cent of programming was devoted to Canadian films. For whatever reason, Canadian cinema has been disenfranchised—orphaned by all broadcasters. We are providing a permanent destination that offers consumers access to over 3,000 films. Starlight is promising to take 70 per cent of its gross income and put it right back into production of Canadian films. No network has done that, not even the CBC. It’s an unprecedented reinvestment of revenues into new programming.

Q: But even within the film industry, there have been criticisms of Starlight’s studio model, which foresees funding eight to 12 Canadian movies a year.

A: There is no studio model. The money that’s invested back into Canadian films will be inaccessible to Starlight’s Canadian shareholders. Calling it a studio is inaccurate. A studio, like Paramount or Fox or Disney, produces and distributes its own films. We will not do either. The movies will be produced by independent producers who will bring projects to Starlight.

Q: Burger says that Starlight will own the movies it funds.

Q: What is Starlight’s cut of a film’s recouped revenues?

A: Depending on whether or not the producer invests his tax credits, Starlight would have between 50 and 80 per cent.

Q: Whether you call it studio or not, isn’t it odd for one private company like Starlight asking to fulfill a cultural mandate traditionally handled by a public institution?

A: Who? The CBC? The CBC is running just three or four Canadian movies a year.

Q: Opponents of Starlight say those who want to see Canadian films can buy them via video-on-demand.

Q: But you’re not just engaged in an act of cultural altruism. You do expect to make a profit.

A: We’re investing money and we would certainly hope to recoup our investment and make a return.