Take seven: The talking points you need to know from the Golden Globes

From a Birdman bungle to genuine messages about social issues, here's what people are talking about from the official kick-off to Oscar season

It may be seen as the Oscars’ goofy baby brother, but Sunday night’s 72nd annual Golden Globes brought the glitz, the glam, and the actual social issues, against all odds, from both film and TV. Here are the buzziest talking points from the show that was: 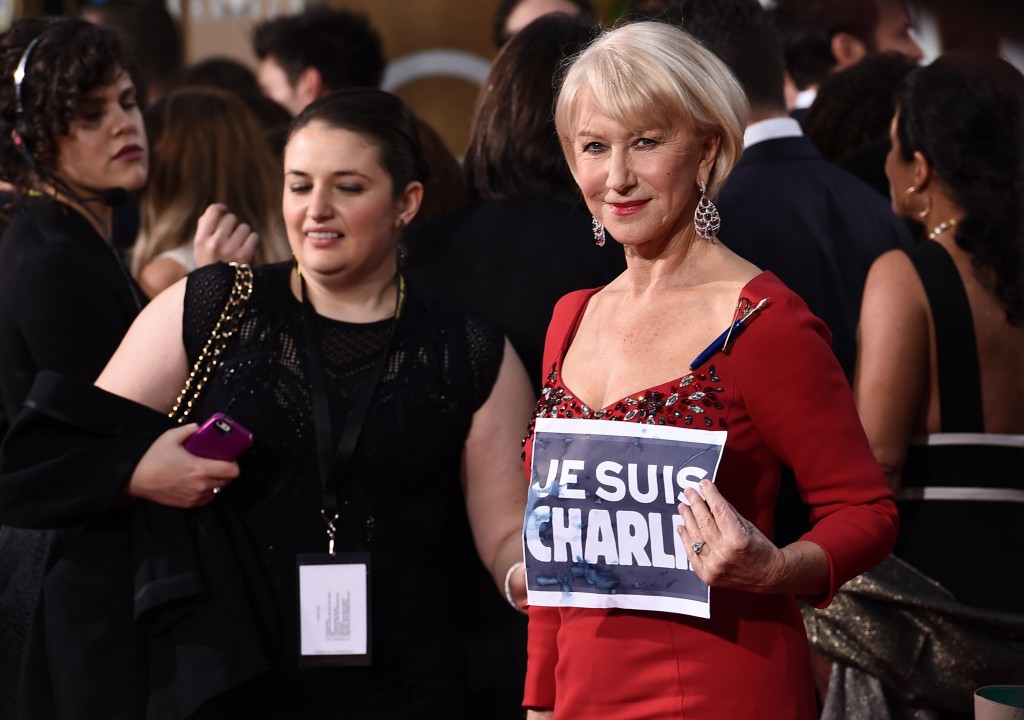 Ignoring the generally cardinal rule that you probably don’t want to get too matchy-matchy, the Golden Globes’ red-carpet-winning looks tended toward the colour of love and passion. Girls‘ girls Allison Williams and Lena Dunham were resplendent in rich ruby; Taylor Schilling’s eye-popping gown went toe-to-toe with Viola Davis’s flowing strapless, and, in a twist on the pattern, Emma Stone paired her red hair with a bold, beautiful jumpsuit, tied together with a long bow. The most noteworthy red, though, was Helen Mirren, in an sexy form-fitting dress finished off with a pen brooch—a show of solidarity with those who died in the Charlie Hebdo killings in Paris, and proving that the entertainment world is hardly hermetically sealed off from the major issues of the day. 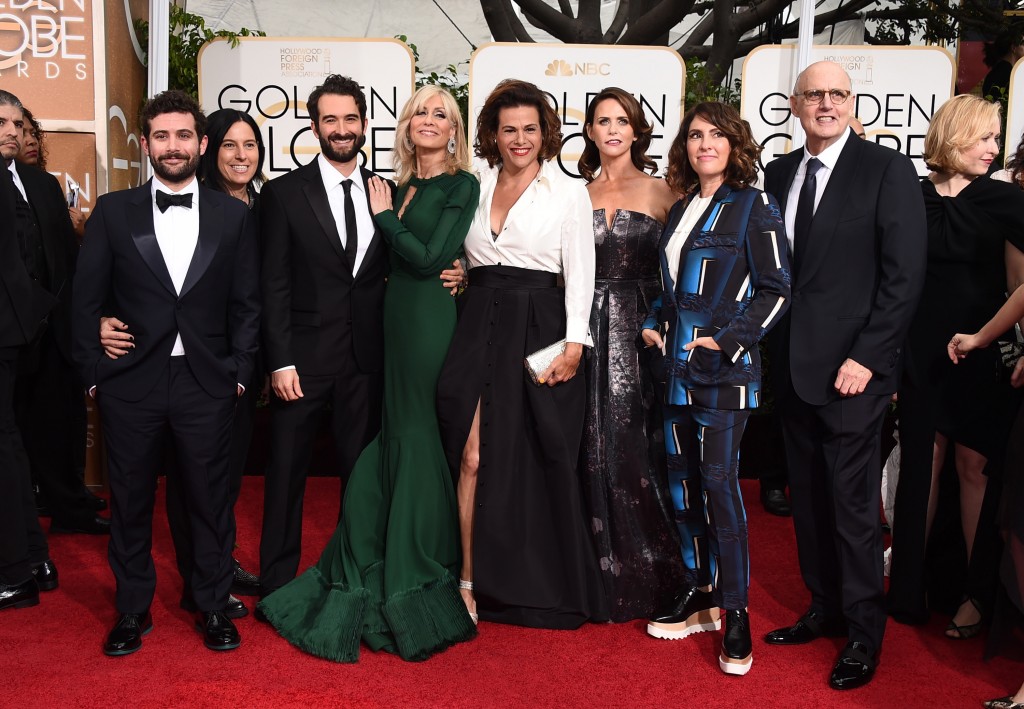 Speaking of serious issues, the show refused to ignore the issues of the day. Among the celebrities who joined Mirren in standing up for free speech: George Clooney and Amal Alamuddin, who pinned #JeSuisCharlie buttons to their elegant garb, and Joshua Jackson and Diane Kruger, who posed for red-carpet photos with a printout of that now famous slogan. And Theo Kingma, in his speech as the president of the Foreign Press Association welcoming all to the event, earned a standing ovation from the audience for this call to arms: “Together we must stand together against anyone who would stand against free speech, anywhere, from North Korea to Paris.”

But there were many more nods to the news. On the controversy over The Interview: “Tonight, we’ll be celebrating all the TV shows we know and love, and all the movies that North Korea was okay with.” On the ongoing racial crisis after the deaths of Michael Brown, Eric Garner, and others: “Selma is about the Civil Rights movement, which totally worked and now everything’s fine.” When Common won for the original song he and John Legend wrote for Selma, he reverted to the kind of street-poet koans that launched his rap career: “We want to create a better world. Now is our time to change the world. Selma is now.”

Award-winner Joanne Froggatt—whose character on Downton Abbey suffered through a rape last season—thanked the women who wrote her letters in the wake of it. Maggie Gyllenhaal spent time rhapsodizing about the new “wealth of roles for actual women in television and in film.” Jill Soloway’s acceptance speech for best TV comedy series, for her Amazon series Transparent, doubled as a moving cri de coeur for trans rights and a demand to remember the life of Leelah Alcorn, an Ohio transgender teen who killed herself. And Jeffrey Tambor dedicated his best actor in a comedy series Golden Globe (again, Transparent) to the transgender community: “Thank you for your courage, thank you for your inspiration, thank you for your patience, thank you for letting us be a part of the change.”

And then, of course, while Fey warned us that she wouldn’t be afraid to use her pulpit to continue her campaign against Bill Cosby, few were prepared for the missile launch that happened just a few minutes into the opening monologue: “In Into the Woods, Cinderella runs from her prince, Rapunzel is thrown from a tower for her prince, and Sleeping Beauty just thought she was getting coffee with Bill Cosby,” said Poehler, sending the room into “ohhs” and Jessica Chastain to literally try to cover her eyes.

Too often, awards are afraid to shine meaningful light on tricky topics. Outside of a weird crack about Jennifer Lopez from Jeremy Renner, these awards showed how much the needle has moved on things like sexual assault and race, in a way that perhaps could only have happened at the looser Golden Globes. 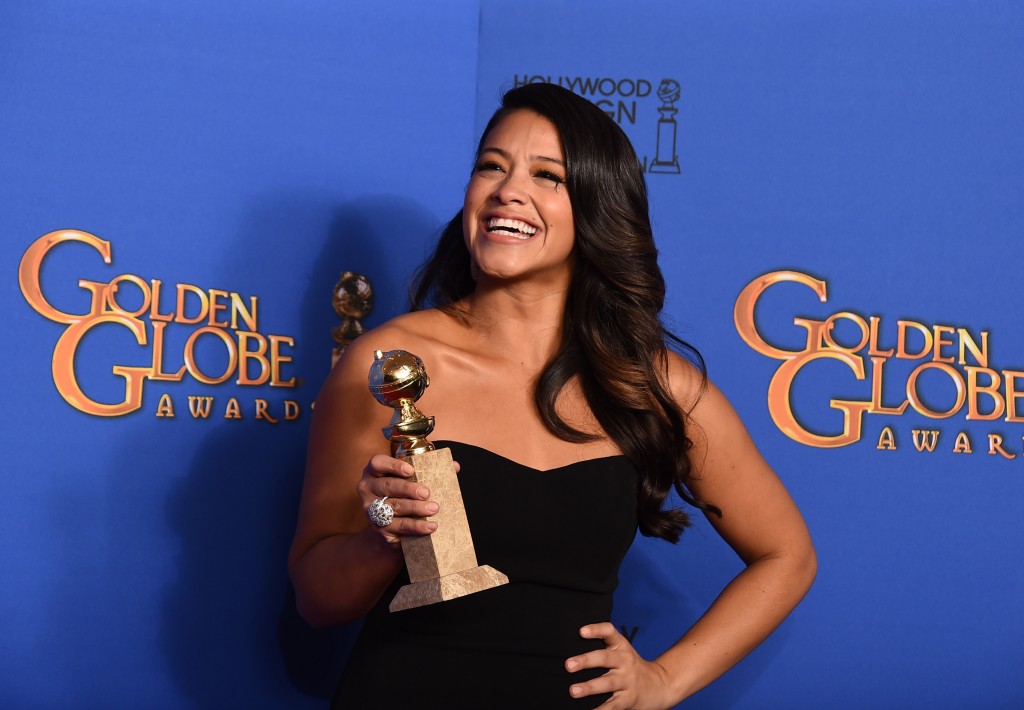 If you weren’t aware of CW’s Jane the Virgin, you are now. Gina Rodriguez, who took home the Golden Globe for best actress in a comedy series was as charismatic and earnest and genuine as the character that earned her the trophy. Rodriguez shouted out the Latino community in her speech, grateful for the support she received for Jane the Virgin, adapted from a Spanish telenovela and borrowing many of its self-aware hokey beats: “This award is so much more than myself—it represents a culture that wants to see themselves as heroes,” she said. It was a lovely, genuine speech that reminds us that diversity isn’t just a good idea—it’s also a useful way to breathe new life into moribund genres like the sitcom.

The legendarily enigmatic artist made an appearance to hand out the award for best original song, to the aforementioned Common and John Legend, inexplicably wielding a scepter. (Not that most of what Prince does is explicable, but anyway.) And while Us Weekly had actually broken the news of his appearance about 30 minutes before the show, it certainly blew minds—especially Allison Janney’s. We are all Allison Janney. 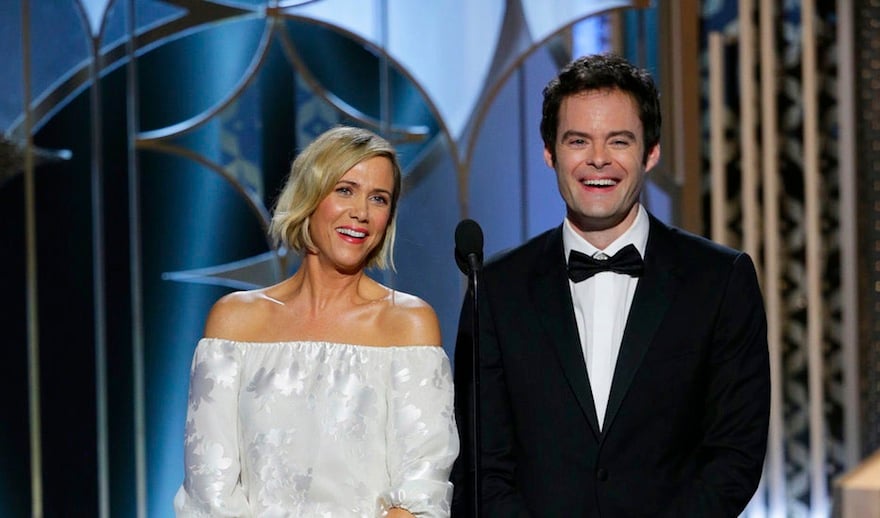 There was, perhaps noticeably, much less of Amy Poehler and Tina Fey, who only made about two appearances in the first two hours. When they were there, they brought their lacerating wit in a very SNL-style monologue. But in their absence, two figures appeared that many on social media urged the Golden Globes to consider: Kristen Wiig and Bill Hader, who were on stage to present the award for best screenplay but made it a showcase of their hem-and-haw charm in a long riff on classic movie scenes with filler text. It’s a chemistry no doubt honed from their SNL days but also their underrated 2014 flick The Skeleton Twins, where they played siblings, and if they get the gig, count me among the supporters. 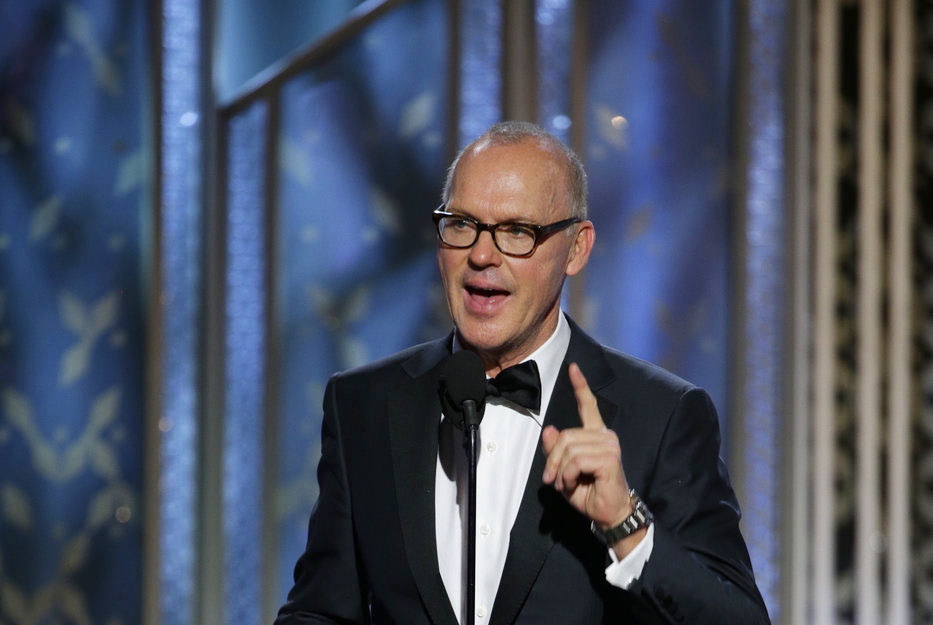 Michael Keaton accepts his Golden Globe for best actor in a motion picture comedy or musical for his role in ‘Birdman’. (AP Photo/NBC, Paul Drinkwater)

Birdman is the big winner, except when it isn’t

It was, as expected, a coronation for Birdman, the dark, swirling, brilliant metanarrative that feels very much like a critics’ choice pick but also feels unlikely to make as much of a mark at the Oscars. Michael Keaton made a stirring speech, tearing up at the mention of his best friend and son, Shawn (who, as it so happens, also wrote some of Jason DeRulo’s biggest hits, so that’s a thing). It also won for best screenplay. But then, confusingly, it was defeated for best film (comedy or musical) by The Grand Budapest Hotel, a great film in its own right, but an out-of-nowhere pick (it was the film’s only win of the night). Birdman felt like a slam-dunk given the fact that Boyhood, expected to run rough-shod over the Oscars, was free to win the drama categories, meaning that this was a reverse Argo (which won three of the prestige Oscars but failed to even nominate Ben Affleck for best director). Except that Birdman is good.

The Golden Globes kind of got it

Other than the Birdman bungle, the Golden Globes proved that it was more than just a boozy hangout—and it mostly got the picks right. The Affair, Fargo and Transparent were the TV series that should have won, and did; Boyhood and Birdman were rightly seen as two of the best films of the year. Despite the cracks about the Globes even having TV awards—Tina Fey’s snarky line about “running out of time” when it came time to discuss television—its bold moves to eschew mass-market easy picks like Big Bang Theory et al. made it a better sign of TV’s rise than even the Emmys. While few were expecting statement-making narratives, the picks are far less interesting than what people said on stage: the feminist stands, the call for trans rights, the #JeSuisCharlie. In a way, it could only happen here; freed from the need to offer compromise, the Golden Globes largely nailed it. So you can have your Oscars, if you care so much. I’ll take the Golden Globes.