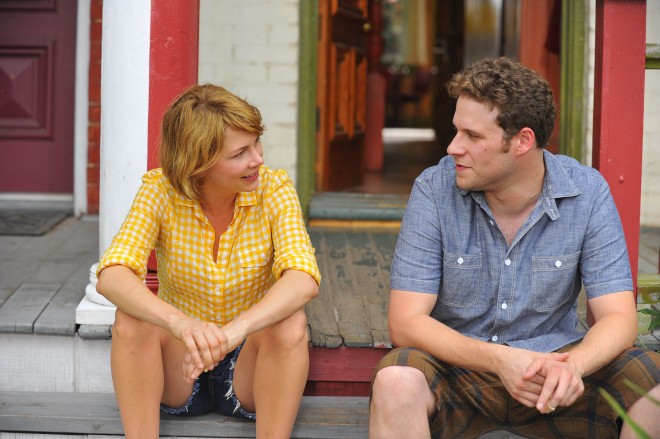 I’ve seen Take This Waltz twice, first at the Toronto International Film Festival last fall, and more recently while preparing a feature, Marriage Polley Style, on writer-director Sarah Polley. Between TIFF coverage and writing that feature, I feel a bit Waltzed-out. But I haven’t actually weighed in with a review, until now. Today the film finally opens, nine months after its festival premiere.

People often ask me if I see movies more than once before reviewing them. The answer: if necessary. When months elapse between the premiere and the commercial release, you need to refresh your memory. The thing is, a movie inevitably changes on second viewing. They get better or worse. I had mixed feelings about Take This Waltz on first viewing, and still do. But the second time around, I liked it a whole lot better.

Here’s the deliberately non-committal capsule review I wrote during TIFF: “Sarah Polley’s second feature marks a bold departure. It’s as expansive, reckless and flamboyant as her debut feature (Away From Her) was intimate, restrained and sombre. Michelle Williams stars as Margot, a Toronto woman whose cozy marriage to Mr. Nice Guy—a cookbook author played with stoic sincerity by Seth Rogen—is threatened as Margo tiptoes into a slow-burn summer romance with the dreamboat next door (Luke Kirby). With its giddy spirit of hometown rapture—throwing Sarah Silverman into an aquafit class scored by the Parachute Club—Take This Waltz lacks the discipline of  her Alice Munro adaptation. But Polley braves some highly charged personal terrain, plunging into the deep end of marital angst, as her heroine is torn between domestic comfort and adulterous fantasy.”

On first viewing, I felt the movie was too long and discursive. And the story arc of Sarah Silverman’s character—Lou’s alcoholic sister—seemed too tangential. Also, as a tale of romantic frustration, Take This Waltz can be frustrating. As Margot is torn between her stolid husband and her fantasy suitor, I found it hard to root for either alternative. You almost wish someone else would come along. Her likeable husband Lou (Rogen) is sweetly devoted to her, in a brotherly way, but he’s not sexy or passionate, and their intimacy takes the form of cringe-worthy childish games in which they imagine how they’d torture each other. Margot’s suitor, Daniel, is a tall, dark stranger who lives across the street, a sensitive artist who works as a downtown rickshaw driver. But from the moment he starts hitting on her, telling her how she feels and what she thinks, he seems a bit creepy. Of course, that’s the deal with adulterous flirtation: both parties are essentially predators, stalking each other. But Daniel is a sexual fantasy figure and his character doesn’t go much deeper.

As for Margot, she’s an enigma. Not that there’s anything wrong with that. Michelle Williams is an extraordinary actress, incapable of a false moment. Every glimmer of expression seems to originate in the moment. Even her feints of deceit seem authentic and oddly honest. No matter what is right or wrong with Take This Waltz, the film is worth seeing for her performance alone.

But she’s not the only reason. Although Rogen is saddled with playing a loser, his performance has remarkable depth. He’s one of those actors who essentially seems to be the same guy in all his movies, but this is his strongest dramatic role to date, and even with the comic quotient dialed down, his wit shines through. There’s a lethal scene of Lou and Margot “celebrating” their anniversary at a restaurant. At one point she asks why they’re not talking. I don’t have the verbatim quote at hand, but basically he says, “What’s there to talk about? We’re married. We’ve already know everything there is to know about each other.” 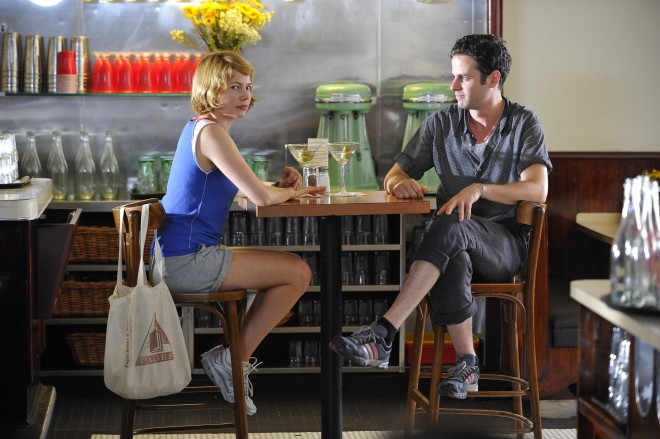 Michelle Williams and Luke Kirby in 'Take This Waltz'

Much of what’s maddening about Take This Waltz is also a source of pleasure. The low simmer of the discursive narrative builds an overripe summer-in-the-city atmosphere. Popping with saturated colours, the succulent visuals make Toronto look more attractive and tropical than you ever thought possible. (It’s interesting to see this city’s filmmakers take turns trying to bottle their love for this city. Atom Egoyan framed visions of uptown luxury in Chloe, Bruce McDonald conjured the funky side of town in This Movie is Broken, and now Polley delivers a flat-out rhapsody.)

The film’s weakness is also its strength—Polley’s valiant attempt to defy narrative convention while capturing the messy stuff of relationships. If this were a Hollywood chick flick, it would zoom through a brisk and predictable three-act structure. The plot would hinge on a big fat secret or a fatal disease. The husband would be a total jerk. The lover would be pristine. And the heroine’s liberation would be assisted by a shopping montage, a makeover or flight to paradise. Inevitably someone would have to drive somewhere fast in a car, or meet in an airport. And there would be a back-lit sex scene with artful glimpses of nudity.

Perversely, Polley shows women stark naked in an everyday, asexual context, showering at the YMCA, then keeps her lovers fully clothed across a table for a graphic verbal striptease. Her most gorgeous scene of back-lit beauty shows Williams baking blueberry muffins. She’s slouched by the stove, looking glum, as a golden light catches the down on her arms and the camera closes in on her turquoise painted toes.

I still feel Take This Waltz  is flawed, and would “work” better with a tighter, more disciplined narrative. But the filmmaking is impeccable, and its imperfections flow from unbridled ambition, not any lack of talent. The second time I saw the movie, I happily surrendered to the spell, and never lost my patience. I appreciated the way it settled on a resolution that’s neither happy nor tragic. And behind the hot shimmer of fantasy, the awkward rhythms of its romance felt true to life.