Alexander Payne does for Hawaii what he did for wine in 'Sideways,' with Clooney playing against type as an cuckolded dad 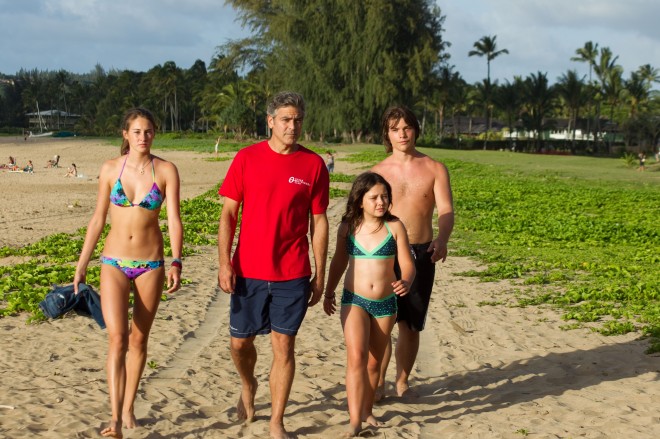 George Clooney is his generation’s Cary Grant. The smoothest man alive. Whether he’s leading a heist in Oceans 11 or playing a slick presidential candidate in The Ides of March,  he has built his career on a debonair image of manly prowess, dry wit and impeccable charm. Which is not enough for an actor of note. So it’s interesting to see Clooney struggle to subvert his image. What’s curious is that Hollywood’s most eligible, and durable, bachelor remains as unattached onscreen as in life: unlike, say, Ryan Gosling, he hardly ever ends up cast as a romantic lead. This guy’s screen kisses can almost be counted on the fingers of one hand. His emotions have also remained largely off limits—until Up In the Air director Jason Reitman finally pried open a crack in his armour and located some vulnerability. Now with The Descendants, Clooney goes further, and finally takes a plunge into the emotional deep end. It’s the first film in seven years from Sideways writer-director Alexander Payne, who casts George sharply against type as an awkward, ineffectual father blundering around Hawaii looking for his balls. (And no, it’s not a golf movie.) The result is one of the year’s most original and affecting films, a bittersweet comic drama that steers clear of Hollywood formula and comes at us sideways, surprising us at every turn. 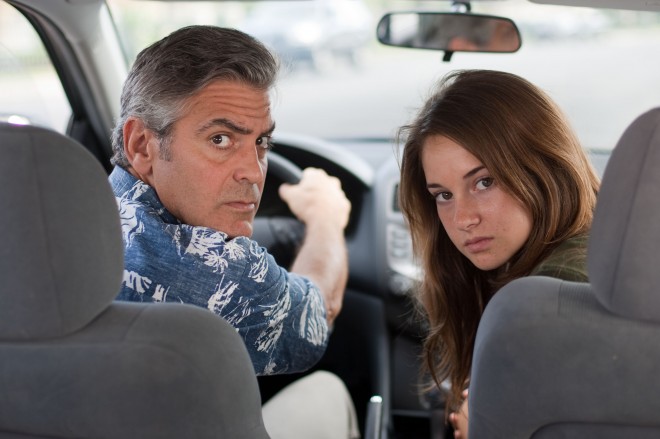 George Clooney and Shailene Woodley in 'The Descendants'

Dulling down his charisma, Clooney stars as Matt King, a lawyer who’s shocked to learn his wife has been having an affair—something he discovers only after a powerboat accident has put her in a serious coma from which she seems unlikely to recover. King’s two unruly daughters drive the narrative—especially the elder girl, Alexandra (Shailene Woodley)—leading their loser dad on a quest to track down the louse who’s been bonking their mom. Tagging along for the ride is Alexandra’s stoner boyfriend, Sid (Nick Krause), a surf dude who slyly steals the movie with his deadpan insolence. Clooney’s character, meanwhile, is worried about land as well as love: he’s in charge of selling off a big tract of unspoiled paradise that has been in his family for generations. That subplot nicely dovetails with the hunt for the comatose mom’s Other Man. And through the film, the island landscape looms as a presence that undercuts the usual sun-and-sand cliches; there are a lot of gunmetal skies.  Payne does for Hawaii what he did for wine in Sideways.

“In Hawaii,” says Clooney’s character, “some of the most powerful people look like bums and stuntmen.” That’s just one wry observation in a social comedy that treats the Pacific “paradise” as a dominant character, one that is beautiful, impossible and scattered.  “A family is like an archipelago,” someone says at one point, separate islands always drifting farther apart.”

Balancing offbeat humour and honest sentiment, Payne rides a perfect wave to an unpredictable beachhead. The Descendants is an unassuming film that never strains at high art, but does what we want movies to do: we laugh, we cry, and come out of the dark feeling the characters are still with us, loving and arguing.

The Descendants, by the way, is not the only movie opening this weekend about a father beset by two rebellious daughters. By all means, check out Café de Flore, a powerful drama from Jean-Marc Vallée, the Quebec director of C.R.A.Z.Y. and The Young Victoria. More details in an upcoming post.