Talk about Tilda in 'We Need to Talk About Kevin'

Swinton's brilliant, harrowing performance deserved an Oscar nod, but she is upstaged by the film's lurid style 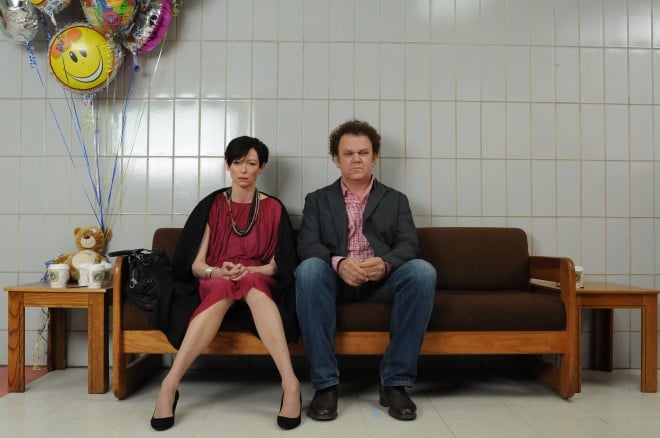 Tilda Swinton and John C. Reilly in 'We Need to Talk About Kevin'

Tilda Swinton has already won an Oscar, for playing a corporate bitch in Michael Clayton. So let’s crown her this year’s Queen of the Anti-Oscars—poster girl for the gallery of overlooked actors who gave incendiary performances in movies that were  too dark and weird for the Academy’s taste. Namely: Michael Fassbender in Shame, Ryan Gosling in Drive, Charlize Theron in Young Adult, Michael Shannon in Take Shelter, Woody Harrelson in Rampart, Kirsten Dunst and Charlotte Gainsbourg in Melancholia. And what a fine bunch they are. But it’s probably safe to say that no performance among the 2011 awards contenders is as irredeemably dark as Tilda Swinton’s in We Need to Talk About Kevin, which opens this week in Toronto, Vancouver and Montreal.

Based on the prize-winning novel by Lionel Shriver is the story of a mother’s worst nightmare—raising a problem child who grows up to commit a monstrous act as a teenager. The boy is a demon seed. In that sense, the question of nature vs. nurture doesn’t really arise, certainly not to the same degree as it does in Shriver’s novel, which unfolds as a series of letters by the mother, who is haunted by how much her poor aptitude as a parent may have contributed to her son’s evil disposition. In the movie, we feel harrowing empathy for Eva (Swinton)—as she tries to cope with the hellish aftermath of the crimes her first-born son, Kevin (Ezra Miller) has committed, and, in flashbacks, as she struggles to establish a bond with a child whose malevolence grows to psychopathic proportions over the course of 15 years.

Although Kevin is an extreme case, any mother may recognize glimmers of guilt in the movie’s scenes of “bad” motherhood—such as when Eva parks the pram beside a jackhammer just to drown out the baby’s screams. And Swinton, who is as articulate an actor as you’ll find, has summed up her her character’s dilemma as sharply as any critic could: “It’s the ultimate nightmare scenario for anyone who has children,” she says. “I think the story has as much to do with the reality of parenting as Rosemary’s Baby has to do with the reality of being pregnant. It’s a kind of horror film about what every parent most fears: not feeling it from the very get-go, not feeling a bond, and worse than that, feeling an anti-bond that grows and grows from screaming baby to truculent child to murderer.”

The strength of the film lies in the brilliance of Swinton’s nuanced portrayal of a mother’s guilt, anger, remorse and unrequited love. It’s often said that a movie can’t hope to capture the complexity of a book, but it’s all there in Swinton’s performance, which truly did deserve an nomination. She’s also well supported by John C. Reilly, as the jolly dad who doesn’t see the warning signs, and Ezra Miller, who is suitably scary as the teenage demon seed.

Unfortunately, writer-director Lynne Ramsay (Ratcatcher, Morvern Callar) applies  the narrative layers with a heavy brush, slapping down a punk sense of style—with a screaming motif of blood-red images—that seems to revel in the lurid. Buried in this movie is a compelling essay on motherhood, but the director seems determined to drive it through the guard rails right into the ditch of melodrama.

Swinton gives nothing less than a ground-breaking performance. The dark side of motherhood still remains a largely explored territory in the movies. So when an actor create such a vivid and complex portrait of a maternal hell, it’s a  crying shame to see it upstaged by the director’s over-weening sense of style.

FILED UNDER: Lynne Ramsay oscar Tilda Swinton We Need to Talk About Kevin