Brian D. Johnson picks the flicks to watch over the holidays

It was an exceptional year for movies. Just as everyone was complaining that film had lost its creative edge to television, and that the monoculture of comic book blockbusters was ravaging cinema’s ecology, we were knocked out by a wave of smaller films that were smart, original and thrilling.—more than will fit on a top-10 list. Below are my 10 personal favourites, but I’ve added an alternative list of 10 more films that could easily take their place. And the list is subject to change (I have yet to see Scorsese’s The Wolf of Wall Street).

It took a British director, Steve McQueen, to finally bring America’s epic tragedy of plantation slavery to the screen. With nature serving as a silent witness, never has a film been both so beautiful yet so hard to watch. Expect Chiwetel Ejiofor to win the Oscar for his titanic portrait of a man who’s forced to repress his intelligence and rage in order to survive bondage, and Lupita Nyong’o to win supporting actress. This is such strong stuff I’m afraid to see it a second time, but it’s the movie of the year: it turns the audience into a congregation.

It was my favourite film in Cannes and has stayed with me ever since. With their note-perfect fable of failed folksinger in pre-Bob Dylan Greenwich Village, the Coen brothers are at the top of their game, and as acerbic as ever, but they have never shown more heart.  As both an actor and singer, Oscar Isaac gives a star-making performance in the title role. 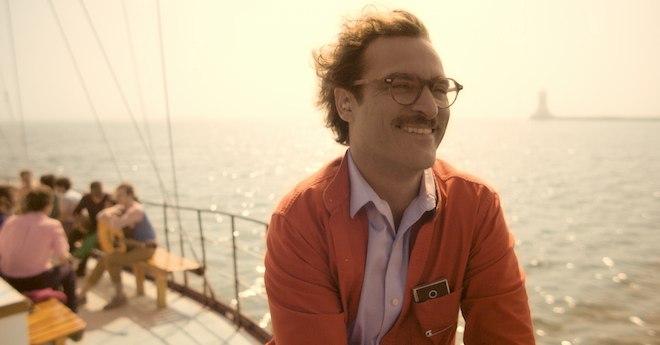 It says something about our era when the year’s most poignant love story is a romance between a man and his computer operating system. But Her is more than a dystopian novelty act. Joaquin Phoenix and the disembodied Scarlett Johannsen make one of the most spirited romcom couples since Annie Hall. And with stunning visuals, writer-director Spike Jonze finds depths of cosmic pathos in this science fiction of the moment.

The script is corny, and George Clooney mugs shamelessly, but Alfonso Cuarón takes the space opera to a whole new threshold with this 3D miracle of direction. Gravity may lack gravitas. But with Sandra Bullock giving her all, it’s a bungee-jump thriller that’s breathtaking on every level—from cliff-hanging suspense to Space Odyssey interludes of rhapsodic images. If ever a movie demanded to be seen on the big screen, this is it.

5. Blue is the Warmest Colour

A Touch of Sin

Channelling subversive rage into virtuosic filmmaking, Jia Zhangke pushes the limits of Chinese censorship and delivers the year’s most potent sociopolitical spectacle. As a contemporary revision of the W?xiá genre, this epic of explosive retribution is a kind of Chinese Pulp Fiction with a political pulse. Against panoramic vistas, Jia directs a suite of four stories splattered with vigilante violence, not all of it reprehensible. He’s forged a powerful portrait of desperate individuals driven to extremes by runaway corruption, yet it plays like poetry.

With his Hollywood debut—a $5-million marvel that’s cheaper than his Canadian features—Quebec auteur Jean-Marc Vallée corrals two gutsy performances from Matthew McConaughey and Jared Leto, who lost 80 pounds between them for their roles. Both actors overcome their punch-line images in a stranger-than-fiction tale of a homophobic rodeo cowboy who became a pioneering crusader in the AIDS crisis.

Casting two stars famous for iconic TV roles (Julia Louis-Dreyfus and James Gandolfini), Nicole Holofcener gives them room to stretch in the year’s most unlikely feat of romcom chemistry. Astute, funny and tender, Enough Said is more conventional than Before Midnight and Frances Ha—either of which could just as easily take this spot. But the way it make us forget the formula makes it that much more impressive.

It’s the best Scorsese movie he never made. David O. Russell blithely plunders the ’70s tone and rolling cadence of Goodfellas to compose a sprawling ensemble piece loosely based on the FBI’s Abascam operation. As two con artists, an unrecognizable Christian Bale and a faux-Brit Amy Adams get mixed up with an over-zealous FBI agent (Bradley Cooper) and a New Jersey mayor (Jeremy Renner). But as Bale’s wife, Jennifer Lawrence plays the ultimate con, stealing every scene.

10. Captain Phillips and All is Lost

OK, I’m cheating here. But these two sagas of men overboard belong together, and not just because of their waterlogged heroes. In Captain Phillips, a hijacking drama directed with riveting realism by Paul Greengrass, Tom Hanks reminds us he’s not just Hollywood’s go-to Everyman, but a seriously compelling actor. And just when you thought Robert Redford was overdue for retirement, he pulls off one of  the performance of his life with a solo, almost wordless tour-de-force.

And here are another 10 movies I liked almost as much: Nebraska, Prisoners, Frances Ha, Short Term 12, The Act of Killing, The Place Beyond the Pines, After Midnight, Philomena, Twenty Feet From Stardom, Tim’s Vermeer.

FILED UNDER: 12 Years A Slave A Touch of Sin After Midnight All is Lost American Hustle Blue is the Warmest Colour Captain Phillips Dallas Buyers Club Enough Said Frances Ha Gravity Her Inside Llewyn Davis Nebraska Philomena prisoners Short Term 12 The Act of Killing The Place Beyond the Pines Tim’s Vermeer top 10 Twenty Feet From Stardom