Clooney and Pitt may be branded as glamour boys, but their real romance is with intelligence 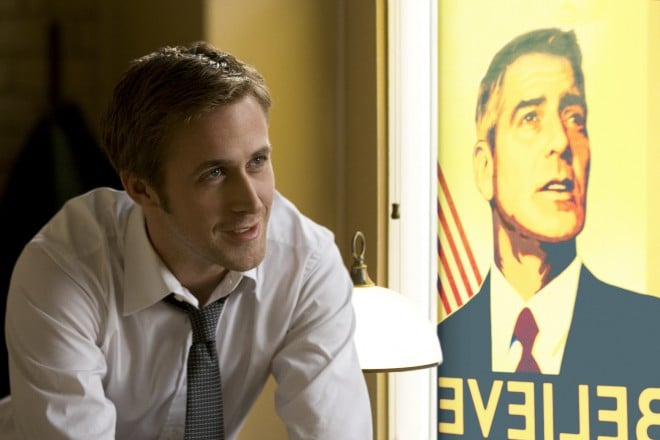 Ryan Gosling (left) as the press secretary; George Clooney as the candidate

George Clooney, who directed The Ides of March, likes to call it a political thriller. Which may be putting too fine a point on it. Insofar as politics is a game, as opposed to a mission, it can be seen as a sports movie, a less sentimental Moneyball, with the backroom boys trying to win the White House rather than the World Series. In his finest directing effort to date, Clooney casts himself as a left-wing Democrat in a presidential primary race. But he’s not the star, just the supporting player. The movie belongs to Ryan Gosling, who portrays Clooney’s hotshot press secretary, a golden boy whose tender ideals hit the wall in a game of hardball involving sex, lies and interns. This, in fact, is so much of a backroom story that Clooney’s character did not even appear onstage in the 2008 play on which the movie is based. The play, which bore the decidedly less sexy title of Farragut North, comes from Beau Willimon, who was a young writer on presidential hopeful Howard Dean’s 2004 Iowa campaign. Presumably he knows whereof he speaks.

The Ides of March burns along with a shrewd, whip-smart script, and when I first saw it, just before TIFF, I instantly hailed it as this year’s The Social Network. The analogy seemed obvious: it’s another brainy backstage intrigue about diabolical ambition, dirty tricks and betrayed loyalty. Well, since then I saw Moneyball, which was co-scripted by Aaron Sorkin, and now of course everyone is comparing that movie to The Social Network, which Sorkin wrote.

It still seems so rare for smart, literate movies to make a popular splash that we can’t help seeing them as somehow related. And in a sense they are. Clooney and Pitt may be branded as glamour boys, but their real romance is with intelligence.

What’s exciting about both Moneyball and The Ides of March is exactly what was exciting about The Social Network (regardless of how far its stretched the truth of Facebook’s creation story). And that’s the strangely visceral thrill of being caught up by intelligence in a movie. Hollywood routinely assumes that audiences want crude, formulaic kicks; that sharp intellect is the domain of challenging art house fare; and that no one has gone broke by low-balling the intelligence of the American people. But audiences, regular audiences, crave intelligence just as they crave sex, comedy and action. There’s nothing quite like seeing good actors set their brains on fire with a quick, crackling script. And, I don’t know about you, but I love that feeling of having to race to keep up, rather than enjoying the smug confidence of knowing what’s coming next. It makes the pulse quicken, not unlike watching a good action scene.

The Ides of March did that for me with its inside-baseball view of politics, although Moneyball was, on balance, more fun, and (even though baseball is allegedly less brainy than politics) more complex. Both are movies about games people play featuring actors at the top of their game. After his sublime samurai number as the silent psycho in Drive, who goes from gentle to brutal in a twinkling, Gosling again pulls off an alchemical miracle of acting, as an untarnished idealist who’s learned to play dirty. It’s a masterful performance. He is flanked by Paul Giamatti and Philip Seymour Hoffman (also in Moneyball), who are cast as sparring campaign managers, and by Clooney, who has typecast himself with cynical precision as a liberal smoothie.

Ides of March is a smart slice of acting heaven.