The Canadian climate: bad for fruit, good for documentaries 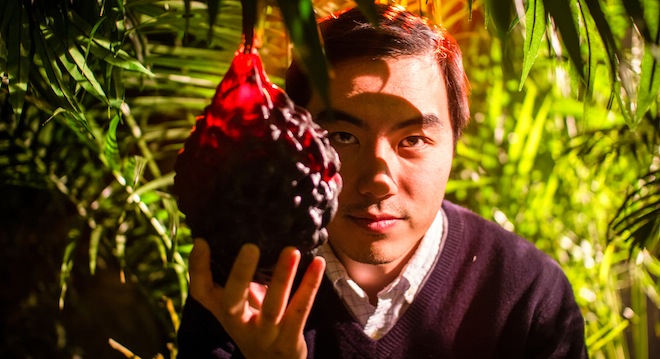 When it was announced earlier this year that Canadian documentary funding was to undergo radical cuts, with Telefilm slashing 50 per cent of its $1 million allotment to the Theatrical Documentary Program, doc filmmakers around the country– who’ve been dependent on government cheese since the National Film Board’s inception 70 years ago–began a collective sweat. With glaring cutbacks to the CBC and NFB as well, a fertile artistic community was at risk of drying out.

Fortunately, the team behind the new government-funded feature-length documentary The Fruit Hunters, already had their financing secured. “I definitely had an ‘Indiana Jones-sliding-under-the-closing-tomb-door-and-grabbing-his-hat’ feeling at the time,” says Mark Slutsky, who co-wrote the film alongside its director, Montreal’s Yung Chang. Inspired by Adam Leith Gollner’s eponymous 2008 novel, The Fruit Hunters is a kaleidoscopic peek into the subterranean world of exotic fruits, and the off-kilter cast of characters that collect, cultivate, chase, eat, and obsess over them.

Over the course of the film, we meet Juan Fernando Aguilar, a Honduran scientist whose single-minded goal is to find an alternative to the Cavendish banana, a monoculture headed towards extinction; Isabella Dalla Ragione, an Italian cultivator-turned-fruit-gumshoe, who uses clues discovered in Renaissance paintings to point her towards new varieties, and an indigenous guide in Borneo, who armed with only a spear, stoically reveals the lip-smacking bounties of the jungle. Chief among the film’s gallery of fruit-savants–or at least the most recognizable–is Hollywood’s resident prez-for-hire, Bill Pullman, whose quest to develop a fruit orchard near his Hollywood Hills home emerges as the film’s central narrative arc.

It’s impossible not to wonder if Pullman’s unexpected inclusion in the film (he was left out of Gollner’s book), helped secure some of the initial funding. “That wasn’t a concern at all,” says Chang. “We had the funding before we had Bill. Bill was a bonus.” In fact, it was only after being handed a New York Times profile on the actor, that they even became aware of his peculiar hobby. Smelling an opportunity, Slutsky reached out over email, and after months of bi-coastal communication, he and Chang were invited to stay with the Pullman family in California. “He was so ingratiating and friendly and sharing, “says Chung. “It meant a lot to help us get the film made with him, and he’s fun. That infectious nature takes over the movie.”

When Slutsky and Chang pitched their movie to Hot Docs’ annual forum, which is attended by “every commissioning editor from every broadcaster that does documentaries around the world,” they used footage they had shot with Mr. Pullman in L.A., and won. “I think that probably helped,” admits Slutsky. Still, it was never intended to be a film about the actor’s personal quest. “We wanted him to be one subject of many in this mosaic that we were building.”

That a boldface name like Mr. Pullman’s wasn’t a factor in raising money, is of little to no surprise, considering that commercial potential (or lack thereof) has never been a deal-breaker for most Canadian documentary-funding agencies, particularly the NFB. Since its inception in 1938, the “House that John Grierson built” has never felt shy about taking chances on, and nurturing filmmakers with a singular creative vision, American distribution deals be damned! With The Fruit Hunters in particular, the Board encouraged Chang–best known for his internationally acclaimed documentary Up The Yangtze–to stray from the fly-on-the-wall technique that he’s pursued in the past. “They allowed me to work on something that was a lot more challenging for me, and experiment with recreations, and maquettes, and miniatures, and animation,” says Chang. “That was fun for me, and it allowed me to flex different narrative storytelling muscles.”

Though it has the spirit of a quintessential NFB production, The Fruit Hunters also received funding from every major government agency, including the CBC, Telefilm, and Sodec. But unlike the NFB, Telefilm and Sodec sometimes favour films with larger box office potential. It’s this adherence to the Hollywood model, that Chang believes is bruising the country’s cinematic identity. “I find that what is special, and what should be supported in Canada, is this idea that we have more than a handful of up and coming filmmakers, of auteurs with points of views, and they should be cultured and nurtured, and that’s something that they do at the Film Board,” he says. “Other agencies like Sodec often try to help those types of filmmakers, but then again you also get less–I don’t want to denigrate the industry–but I think there’s less comparable pieces of film out there. I don’t think we need to make more Passchendaele’s.”

Despite the successes of homegrown talents like Sarah Polley and Xavier Dolan, whose recent works Take This Waltz and Laurence Anyways have received considerable attention stateside–still a barometer of success for many Canadian filmmakers–while maintaining a distinctively Canadian feel (or “Canadian in a good way” as Slutsky put it), both were fiction films, and according to Chang, documentary filmmaking is still our country’s strong suit. Trying to imagine a Canadian documentary filmmaking community that’s able to sustain itself without government help is akin to jumping out of a plane and hoping to land safely without a parachute. They’re losing propositions. “I think it’s a shame that the Film Board has been whittled down to almost nothing, and it’s upsetting,” he says of the recent cuts that will see $6.68 million removed from the NFB’s budget over the next three years.

The fear for many Canadian documentary filmmakers, is having to resort to fundraising models used by their American counterparts, which despite recent innovations such as audience-driven initiatives like Kickstarter, revolve around seeking money from private investors. For Chang, that’s a daunting proposition. “When I think about it, and I watch my colleagues in America, I don’t know how they do it without some sort of government funding, some sort of support system for documentary. I mean it’s such a niche market, it’s such a hard business, it’s amazing to me,” he says. “It requires a different brain cell to be able to plug into that method of acquiring funding, and I think that we’re very lucky here in Canada.”

Chang and Slutsky are hopeful that The Fruit Hunters will see a theatrical release in the U.S., and are in the midst of scheduling screenings with potential distributors in New York. (You can currently see the documentary in both Montreal and Toronto.)

“That’s sort of the best case scenario for any movie, really, to get into American theatres,” says Slutsky. Because despite having the government’s support, exposure in Canada will always be limited. Or as Slutsky put it: “It’s easy to climb the ladder, but the ladder is lying on the floor.”