"In terms of being in bed with Michael Douglas," says Matt Damon, "I now have things in common with Sharon Stone and Glenn Close." 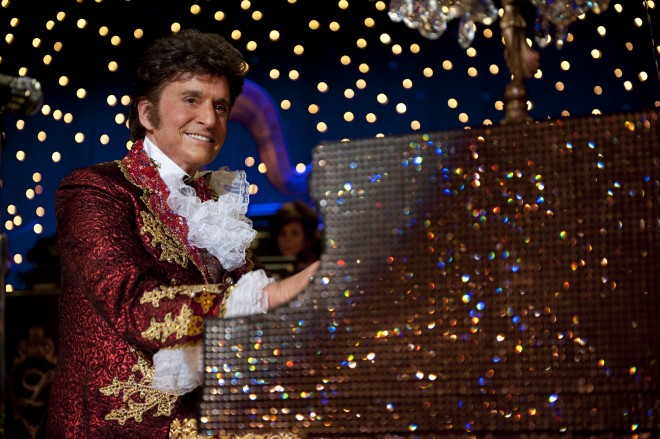 Michael Douglas as Liberace in 'Behind the Candelabra'

Steven Soderbergh ignited his career in Cannes 24 years ago by winning the Palme D’or with his first feature, Sex, Lies and Videotape, a low-budget gem that set a new template for indie cinema. Today, with the premiere of Behind the Candelabra—which Soderbergh says may be his swan song—the Oscar-winning American director has framed a miraculous comeback performance by Michael Douglas after his recovery from stage IV throat cancer.

As piano legend Liberace, the most flamboyant showbiz queen never to come out of the closet, Douglas sinks his teeth into a role rich in theatricality. But much of the movie unfolds as scenes from a marriage, Vegas-style. Based on a memoir by Scott Thorson, Liberace’s longtime lover (played with deadpan aplomb by spray-tanned, Brazilian-waxed Matt Damon), the film is the most explicit gay love story ever performed by A-list Hollywood actors, with ample smooching. Funny and tender, flashy and fascinating, it gives Douglas the opportunity to pull off the kind of bravura performance that wins Oscars. But that won’t happen. Behind the Candelabra, which is in competition for the Palme D’Or, was financed by HBO, after every Hollywood studio had rejected it as a risky proposition that wouldn’t get an audience beyond the gay community. Dumb. It will air May 26 without an Oscar-qualifying theatrical run.

At a press conference in Cannes today, Douglas choked up while talking about working on the role with Soderbergh. Then, regaining his composure, he said, “It was right after my cancer and this beautiful gift was handed to me.” He recalls meeting Liberace as a 12-year-old when he was visiting his father’s house in Palm Springs: “This car stopped, I think it was a Rolls Royce convertible. It was a bright Palm Springs day, and between the gold around his neck and his rings, the light is bouncing off of him. A great smile, not a hair out of place—now I know why.” (He wore a toupee.)

Soderbergh’s watched Liberace on TV as a kid, but his memories are framed by a post-modern prism: “I remember watching my parents watch him. I remember being fascinated by how fascinated my parents were.”

I, too, remember watching him with my parents, and my mother saying, “He’s a bit . . . you know, that way.” As an outrageous wardrobe diva, Liberace was a forerunner of Elton John, Madonna and Lady Gaga. But he didn’t dare confess to the love that dare not speak its name; he felt it would be career suicide.

In a year when gay marriage is enjoying unprecedented recognition, both in the United States and abroad, Behind the Candelabra arrives with fortuitous timing. “It seems coincidental,” said Soderbergh. “Fifty years from now, when this issue comes up, I hope we’ll look back and say, ‘Why was this even an debate?’ But the social-political aspect of it wasn’t in my mind. I was focused on the relationship.”

Douglas’ role will inevitably win major acclaim, especially given his personal circumstances. (With stunning symmetry, at this point the best actor prize in Cannes looks like a race between a breakout performance by Oscar Isaac, who plays an grungy folksinger stuck on the wrong side of showbiz, and Douglas’ comeback role as a Vegas queen.) But Matt Damon makes a superb straight man, though that might be the wrong term for it. He also held his end up at the press conference, entertaining the crowd with stories of showing off his butt for the camera. “In terms of being in bed with Michael Douglas,” he said, “I now have things in common with Sharon Stone and Glenn Close.” A roar of laughter. “And Demi Moore. We can all go out and trade stories.”

A veteran of seven movies with Soderbergh, Damon also raved about the director’s process. “I’d get home in time to have dinner with my kid, open my iPad and look at what we shot that day, completely cut together as it would be in the final movie. Steven has said directing is like creating a giant mosaic from an inch-and-a-half away.” With the director’s routine of digital dailies, said Damon, “everyone would go home and see the movie that we were making in real time. So as nervous as I was, my nerves were completely put at ease.” Douglas added that “we finished shooting on a Friday and by Monday Steven had his first cut.”

Soderbergh’s departure from movie-making, and his experience with HBO, of course raises the question of whether television is surpassing cinema as an art form. “Certainly there’s a lot of great TV being made in the States right now,” said the director, “and in terms of cultural real estate TV is taking control of a conversation that used to be the exclusive domain of movies. I don’t view this as good or bad. It’s just what it is. I think there’s a second golden age of TV that’s happening. Binging is the new black. We saw what happened with House of Cards. It’s an interesting new model to go narrow and deep; it’s a novel onscreen.”

Douglas pointed out that television is more attractive for screenwriters because they tend to be involved as producers. Candelabra screenwriter Richard LaGravinese also weighed in: “You can have ambiguity in television that you’re not allowed in film,” he said, “and you can have episodes that are purely character driven without plot. It’s more exciting creatively.”