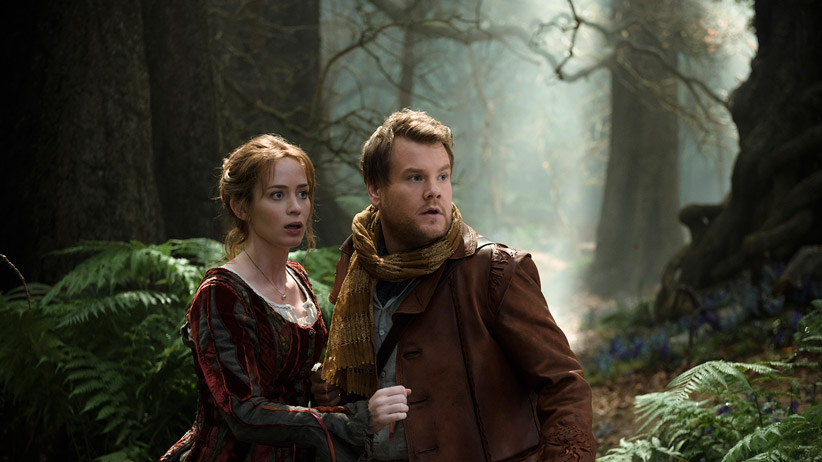 If you went to see Into the Woods based on the advertising, you might have been surprised to find it’s a musical. Though the new Disney film is based on Stephen Sondheim’s 1987 song-filled revisionist take on Grimm fairy tales, the first theatrical trailer had no singing whatsoever, and the second trailer had only one shot of a character singing. Most of the ads made it look more like Maleficent than a Broadway adaptation. But this is hardly the only musical that a studio has tried to sell as if it’s a non-musical; in fact, it’s probably now the most common sales tactic for musicals. Matthew Kennedy, author of the book Roadshow! The Fall of Film Musicals in the 1960s, says that studio marketing departments often believe “the musical is in disrepute. If people hate musicals, then why give them that information?”

So the trailer for the other big holiday musical, Annie, also had only a few seconds of onscreen singing; most of it concentrated on the dialogue for Cameron Diaz (Miss Hannigan), making it look like a comedy without music. And even though Disney’s Frozen had a potential hit song in Let It Go, Disney’s marketing department downplayed it at first in favour of what Variety called a “shrewdly deceptive” campaign, which went “out of its way to avoid even the slightest suggestion that Frozen is a musical.” Much of the advertising concentrated instead on Olaf, the comedy-relief snowman voiced by Josh Gad.

It’s not new for marketers to think that moviegoers—particularly male moviegoers—might be hostile to a movie where people burst into song. Jane Feuer, author of the book The Hollywood Musical, says the hostility to singing “came along with the introduction of the MTV-style musical sequence, which would be as early as Flashdance.” There are some countries where North American musicals don’t do well at all, unless they’re built around internationally popular songs, like the ABBA catalogue in Mamma Mia!

That means a modern musical movie has to be a little bit evasive about what it is. The film that showed how a musical could be sold to a modern audience was 2002’s Chicago, from Into the Woods director Rob Marshall. The studio mostly ignored the singing and sold it based on the darkly comic plot. “Music will attract audiences to a concert, but not to a movie,” explains Samuel Craig, a professor of marketing at New York University. “Without a strong story, the movie’s appeal will be limited,” and so Chicago concentrated on convincing people there was a “compelling story” behind all the music.

To focus Chicago’s viewers on the plot, Marshall even set most of the numbers in a dream-like world, making it possible for musical-haters to speculate that the characters were imagining the songs. Ever since, no matter how much singing there is, a musical usually nods to people who prefer a more realistic style. 2012’s Les Miserables couldn’t hide the fact that it was sung nearly from beginning to end, but the marketing emphasized that the music was recorded live on the set, making it more authentic than regular, post-dubbed musicals.

But not all musicals benefit from this approach. When the Disney musical Newsies came and went in 1992, the Los Angeles Times reported theatre owners were complaining that the ads “showed only a little of the dancing and music.” It didn’t become popular until it was available in the “musicals” section in video stores. In fact, sometimes it helps to embrace the genre. Tami Ihara, head of marketing for Disney’s Japanese division, told the Hawaii Herald that her campaign broke the mould by focusing on what the paper called “Japanese women’s love of musicals.” In Japan, the complete Let It Go number was released as a separate theatrical trailer.

Still, studios will continue trying to sell musicals to demographic groups that might be hostile to the form. That means pitching Into the Woods to people who like fairy tales, or dark fantasy, or Meryl Streep as a witch— not to musical fans. “Fans who already know it’s a musical and will buy tickets,” Kennedy says. “Those who don’t know it’s a musical might buy tickets, then be surprised, pleasantly or not, to find Meryl Streep singing.”

FILED UNDER: Into the Woods Musicals