The embalmed beauty of 'Gatsby' 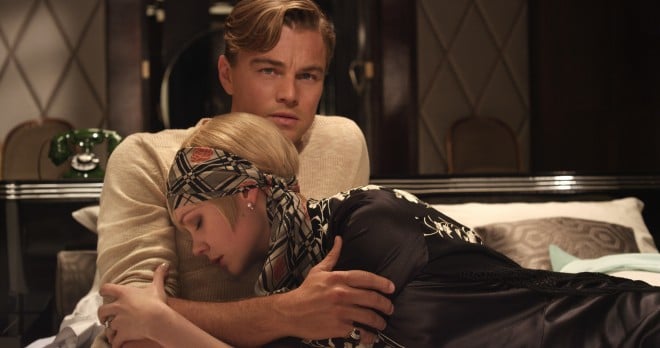 It’s a matter of taste. And expectations. If you are looking for a film that’s faithful to the spirit and tone of F. Scott Fitzergerald’s legendary novel, Baz Luhrmann‘s vulgar, opulent 3D adaptation of The Great Gatsby will come as a disappointment. It seems as desperate to be adored as Jay Gatsby himself, and it’s suffocated by delusions of grandeur on a comparable scale. In fact, Luhrmann’s extravagant, outsized relationship to the novel mirrors that of Gatsby to the book’s modest narrator, Nick Carraway. As iconic as the novel has become, it’s a slender narrative that evokes a glittering world with subtle, glancing prose. It’s more about character than decor. The story’s most dramatic incidents are glided over, reported without embellishment or fanfare. It takes place in the Jazz Age, in the early ’20s, which is when it was published: it was a contemporary novel, and to read it now, it still feels contemporary and timeless, not a period artifact. The movie, however, is a grandiose costume drama that revels in nostalgia, and lurches from high camp to high melodrama. In every respect, it’s a wild departure from the novel, although it has embalmed Fitzgerald’s story and his writing with faithful an eye to detail.

But what else would you expect from Baz Luhrmann, the man who gave us Moulin Rouge? In fact, after everything I’d heard about his Gatsby—with Jay Z serving as a producer, André 3000 and Beyoncé covering Amy Winehouse’s Back to Black, and Jack White doing U2—I was bracing myself for a musical. But despite some sensational production numbers, it’s not a musical at all. It’s a movie that wants to be a play, a Broadway play with fabulously fake sets and archly theatrical performances. It’s not a travesty. It’s a hugely ambitious, Gatsby-esque attempt to construct a mansion-like monument to the book. But amid all the conscious contrivance and ornate eye candy, the drama at the heart of it feels strangely lifeless, frozen in aspic.

One of the ways Luhrmann magnifies the novel, is to erect an elaborate framing device around it. That begins with the 3D, which takes us into the movie through a stereoscopic grille of art deco latticework. Which is not inappropriate. Fitzgerald’s narrative, like Conrad’s Heart of Darkness, has an onion-skin architecture, through which our narrator, Nick (Tobey Maguire) gradually leads us into the enigma within the riddle that is Gatsby.

One way of converting a novel into a film is to strip away the narrator’s literary voice, the book’s internal monologue, and create the world he sees from within. But Luhrmann does the reverse. He enlarges Nick’s role, by concocting a reason for him to write the story that we’re watching. The movie begins after Gatsby’s death. Nick is a patient in a sanitarium, where an avuncular psychiatrist with a gleam in his eye presents him with a silver pen, as if it’s a magic wand, and urges him to write his story. And write he does. There appears to be more narrative voice-over in the movie than dialogue. And at times, orphaned phrases of the novel float up through the screen’s 3D depths as animated graphics. Fitzgerald’s language is fetishized almost as much as the costumes and decor. Just another thing of beauty.

The 3D framing of the scenes, meanwhile, creates a proscenium effect, with the characters looming downstage in the foreground, against diorama-like planes of sets and backdrop. It’s visually arresting, but incredibly stagy. Combine that look with the stiffly mannered dialogue and the scenes begin to lose any sense of reality. Of course, some would say that’s the whole idea: to visualize a dream world, Gatsby’s grand illusion. But the actors  get lost in the shuffle. They don’t chew the scenery; the scenery chews them.

Which is not to say there isn’t some admirable acting. Maguire anchors this dream world with a visceral, credible performance as the man trying to make sense of it—he’s both the story’s voice of reason and the viewer’s emotional touchstone. As Gatsby, DiCaprio creates a mask of consummate poise and repression, designed to be shattered with an eruption of passion when the time comes. In his portrait of a self-made tycoon driven mad by a romantic obsession, there are glimmers of DiCaprio’s Howard Hughes from The Aviator, and shades of Citizen Kane.

As Daisy, Carey Mulligan (An Education) gracefully navigates her character’s shifts—from sexy insouciance to emotional engagement to jittery retreat. For the first time in her career she’s cast as screen siren, and pulls it off with panache—right from the first shot of her, a langorous close-up that seems like a direct homage to Marilyn Monroe. And as Daisy’s philandering and athletic husband, the polo-playing Tom Buchanan Australian actor  Joel Edgerton, appears to be styled as a facsimile of a robust Ernest Hemingway, but he brings the right balance of  bravado and cowardice to the role.

But all the actors seem sadly adrift in this overwrought production. Luhurmann directs them more as fashion models than as actors. You can almost see him posing their every word and every move to be larger than life. Everything is done for effect.

Yet the movie is largely faithful to the text of the novel. The script plucks entire passages of Fitzgerald’s writing that it finds suitable for framing. And aside from the gratuitous flashback device with the shrink, it doesn’t mess with the story. But no opportunity for hyperbole is left unexploited. Luhrmann cranks up the action with a slapstick  of luxury roadsters that hurtle down roads and send the common folk scattering. A movie cliché . And the Disney-like production design exaggerates the novel’s scenario of the industrial wasteland between New York and Long Island’s West Egg into an infernal vision of working-class hell. We get it. The poor are not like the rich; they live on another planet. But neither world, the dream or the nightmare, seems convincing.

Great literature is elastic. It can withstand the pressure of being massively transformed. Luhrmann proved that with his exhilarating Romeo and Juliet, starring a much younger DiCaprio. You have to admire his nerve in taking on a classic American novel, and it’s hard not to be impressed by the dazzle of his execution. It’s one helluva pretty film. But in the end, this re-imagining of The Great Gatsby gets it backwards. The movie plays like a fairy tale, one that venerates glamour and dotes on nostalgia for a lost age. And by the time it enshrines that famous last line of the novel—”So we beat on, boats against the current, borne back ceaselessly into the past”—the text has acquired a sentimental gloss that its author could never have dreamed of.