The Girl With the Dragon Tattoo 2.0

David Fincher's 'Tattoo' goes deeper than the book, or the Swedish movie, and Rooney Mara is a revelation 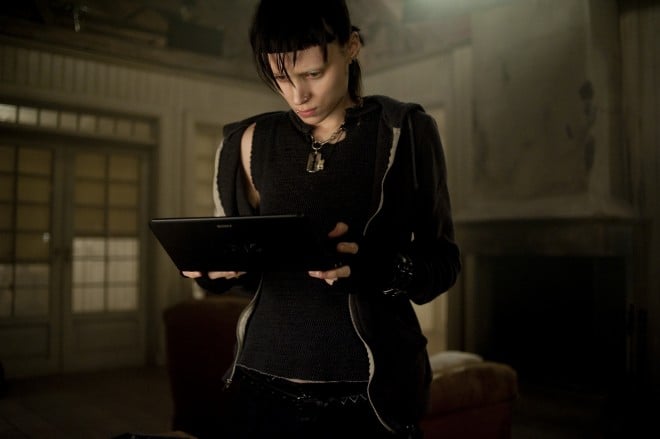 There was good reason to be skeptical about a Hollywood remake of  The Girl With the Dragon Tattoo. There was nothing wrong with the first movie, except that it was in Swedish and came with subtitles. (Strange paradox: while millions of  readers are capable of plowing through novelist Steig Larsson’s turgid prose in English translation, not so many are willing to read a few subtitles). Also, it was hard to imagine another actress improving on Noomi Rapace’s ferocious performance as Larsson’s cyber-punk heroine, Lisbeth Salander. But if anyone was qualified to take another crack at Larsson’s franchise, it would be director David Fincher, who has showed his mastery of the ritual murder genre in both Se7en and Zodiac.

Well, Fincher has succeeded admirably. His Girl With the Dragon Tattoo improves on both the book and the first movie. Right from the opening credits, we realize that this Tattoo will be a more luxurious, enjoyable ride. The über-cool black-and-grey title sequence, with bodies flowing like liquid mercury, could serve as the opening of a Bond movie. Of course, the current 007, Daniel Craig, stars as the Man Without the Dragon Tattoo—investigative journalist and Larsson alter-ego Mikael Blomkvist—but Craig is in strictly civilian mode here. Although his pyramid torso doesn’t quite match the book’s disheveled image of the hard-drinking, chain-smoking Blomkvist, Craig gives a modest, almost diminutive performance, leaving ample room for Salander to cut a swath through the story.

Rooney Mara rises to the insane challenge of the title role and nails it. She doesn’t take anything away from Noomi Rapace, who was sensational. But while Rapace cleaved to the Super Goth template set by the novel, Mara manages to make Lisbeth more human, and more believable, yet no less ruthless.

That deep fault line of vulnerability—scarred over by a litany of childhood abuse—is always dimly visible, as a glint of desperation behind her bravado. Also, the love affair between Lisbeth and Blomkvist is also given a little more heat. In the book, she’s not permitted a shred of romantic feeling. In the film, as our feral avenger beds a man old enough to be her father, there are stirrings of emotional complexity.

Forgive me if I don’t labour through a byzantine plot summary. Even if you haven’t read the books, you probably have some familiarity with the story by now. But for those unafraid of spoilers, here’s the gist: Blomqvist is convicted of libel, set up by the tycoon he targeted. He’s then hired by industrial patriarch Henrik Vanger (Christopher Plummer) to investigate the 40-year-old disappearance of his niece, presumed murdered by a family member. Leaving behind his editor/girlfriend (Robin Wright), Blomqvist buries himself in research on a cold and remote island off the Swedish coast. Eventually he joins forces with Salander, who outstrips him with her computer-hacking skills, and slides naked into his bed. She, meanwhile, has been raped by her state guardian, and wreaked vengeance, blackmailing him in ink and blood.

For much of the story, Salander and Blomkvist drive separate narratives, and the film skates between them with great finesse. The movie is a flat-out masterpiece of editing. Also it’s not easy to make dry research compelling, but Fincher shoots, cuts and collates text and photographs and web images with the dexterity of a card shark; I’ve never seen a more virtuosic dance of stills in a movie. There’s a long history of solving mysteries by photo editing, and in watching Dragon Tattoo I was taken back to the seductive power of images in its early prototype: Antonioni’s Blow-Up.

Screenwriter Steven Zaillian (Schindler’s List, Moneyball) does a superb job of upgrading, and streamlining, Larsson’s narrative without losing essential ingredients. If anything, the story seems to have more substance and depth than on the page, or in the previous film. Even though the running time clocks in at 2 hours and 32 minutes, the movie flies by. The Hollywood budget brings a lustre to the filmmaking that the Swedish movie could not afford—from Lisbeth’s motorcycle rides through the night to the glass hilltop mansion occupied by the Venger dynasty’s  CEO (Stellan Skarsgård).  It’s not as if Fincher has softened or sold out the story for a mass audience. Although the violence is slightly less lurid, and the romance more fully-fleshed—both welcome tweaks—it’s still a tough R-rated thriller.

Tattoo‘s blockbuster pulp origins likely won’t allow the film to achieve the pedigree of, say, Fincher’s previous movie, The Social Network. Although his movie is better than the book, it will be difficult for it to be seen as anything but a subsidiary of the Larsson franchise. Hopefully, however, the box office will allow this new franchise to play itself out, and Fincher won’t lose interest. After all, the only good film in the Swedish trilogy was the first one, directed by Niels Arden Oplev. He didn’t direct the second and third installments, and they played like cheesy TV movies. Lisbeth Salander deserves better—and Rooney Mara has got her back.